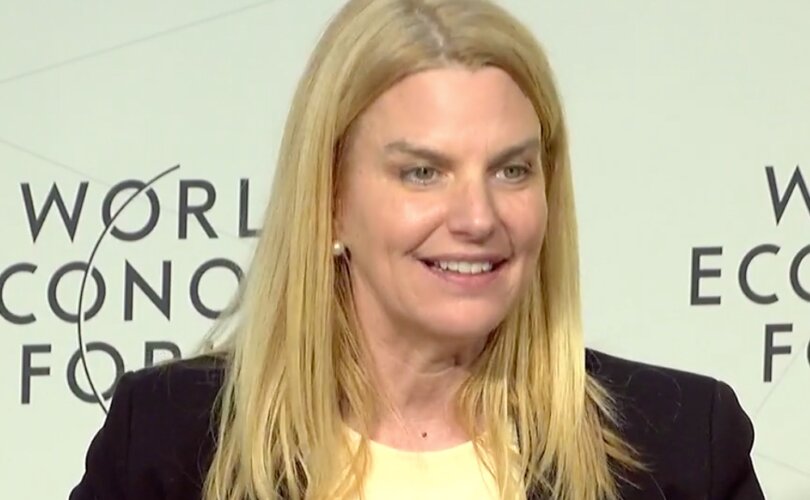 (LifeSiteNews) — Speaking at this week’s World Economic Forum (WEF) gathering, Sarah Kate Ellis, the CEO of the LGBT powerhouse advocacy group GLAAD, explained that her organization aims to “infiltrate” media and has “worked really closely with Hollywood” on “normalizing LGBT folks, including us in all stories.”

LifeSiteNews’ Andreas Wailzer, who has been covering the controversial Davos, Switzerland confab, tweeted a video clip of Ellis, noting, “Hollywood LGBT indoctrination confirmed: CEO of GLAAD (pro-LGBT media monitoring group) Sarah Kate Ellis says that ‘we have worked really close with Hollywood’ in including ‘LGBT folks’ ‘in all stories.’

CEO of GLAAD (pro-LGBT media monitoring group) Sarah Kate Ellis says that “we have worked really close with Hollywood” in including “LGBT folks” “in all stories.” #wef23 pic.twitter.com/UXU5KaEVAe

Earlier in the discussion Ellis talked about how her group strategizes to “infiltrate or work with media corporations who put information out.”

GLAAD describes itself as “the world’s largest Lesbian, Gay, Bisexual, Transgender and Queer (LGBTQ) media advocacy organization.” It seeks to change cultures to be fully accepting of homosexuality, same-sex marriage, sexual promiscuity, and transgenderism, including for children.

While Ellis’ admission may be shocking to some, the strategies that GLAAD employs have never been a secret and were in fact laid out long ago in a gay manifesto published in 1989.

“After the Ball” (subtitled “How America will conquer its fear and hatred of Gays in the 90’s”) presented a comprehensive plan to establish the normalcy of gays and lesbians and to secure broader acceptance and rights.

The manifesto was laid out by a pair of Harvard graduates. Marshall Kirk (’80) watook up work on Madison Avenue, becoming an expert in public persuasion tactics and social marketing. In the hands of groups such as GLAAD, the marketing strategy that Kirk and Madsen contrived has been a resounding success. In many ways, what we now see occurring is attributable to their prescience.

— Article continues below Petition —
Stand with brave priest who was SUSPENDED after defying the LGBT agenda against his abbot’s wishes!
Show Petition Text
12107 have signed the petition.
Let's get to 12500!
Thank you for signing this petition!
Add your signature:
Show Petition Text

Here are a few excerpts which provide an outline of their plan. To anyone who has paid attention to what has been going on in our culture over the last few decades, none of this will sound unfamiliar:

We have in mind a strategy…  calculated and powerful… manipulative… It’s time to learn from Madison Avenue, to roll out the big guns. Gays must launch a large-scale campaign – we’ve called it the waging peace campaign—to reach straights through the mainstream media. We’re talking about propaganda…

You can forget about trying right up front to persuade folks that homosexuality is a good thing. But if you can get them to think it is just another thing – meriting no more than a shrug of the shoulders – then your battle for legal and social rights is virtually won.

Application of the keep-talking principle can get people to the shoulder-shrug stage. The free and frequent discussion of gay rights by a variety of persons in a variety of places gives the impression that homosexuality is commonplace.

[G]ays can undermine the moral authority of… churches over less fervent adherents by portraying such institutions as antiquated backwaters badly out of step with the times and with the latest findings of psychology. [This] has already worked well in America against churches on such topics as divorce and abortion. With enough open talk about the prevalence and acceptability of homosexuality, that alliance can work for gays…

Two different messages about the gay victim are worth communicating. First the public should be persuaded the gays are victims of circumstance, that they no more chose their sexual orientation than they did say their height, skin color, talents or limitations. (We argue that, for all practical purposes, gays should be considered to have been born gay – even though sexual orientation, for most humans, seems to be the product of a complex interaction between innate predispositions and environmental factors during childhood and early adolescence.)…

And since no choice is involved, gayness can be no more blameworthy than straightness. Second, they should be portrayed as victims of prejudice. Straights don’t fully realize the suffering they bring upon gays…

In all candor, we’re convinced that the whole of our scheme will work as intended.

Madsen and Kirk’s scheme has worked and, sadly, has done so brilliantly. Citizens in western countries are bombarded with evidence of their success every day.

“That is because despite the entire entertainment industry falling all over themselves to ingratiate themselves to the LGBT movement (which has long since become an industry), nothing will ever be enough,” explained conservative cultural commentator Jonathon Van Maren for LifeSite last month. “Three major studios including Disney ‘far exceeded’ the goal given to them by GLAAD four years ago, only to see GLAAD jogging past them with the goalposts and getting an ‘insufficient’ grade for their efforts—efforts which cost them plenty of money.”

Van Maren noted that GLAAD “depends on the existence of alleged discrimination to justify its ongoing grift.”

The entertainment industry has already surrendered to the LGBT movement. But that isn’t enough for the activists at GLAAD. What they really want is for the entire industry to functionally serve as the propaganda arm for their grifting movement. I suspect they’ll get what they want, too.

In 2021, GLAAD was one of four organizations that took credit for influencing Facebook to permanently remove LifeSiteNews from its platform.