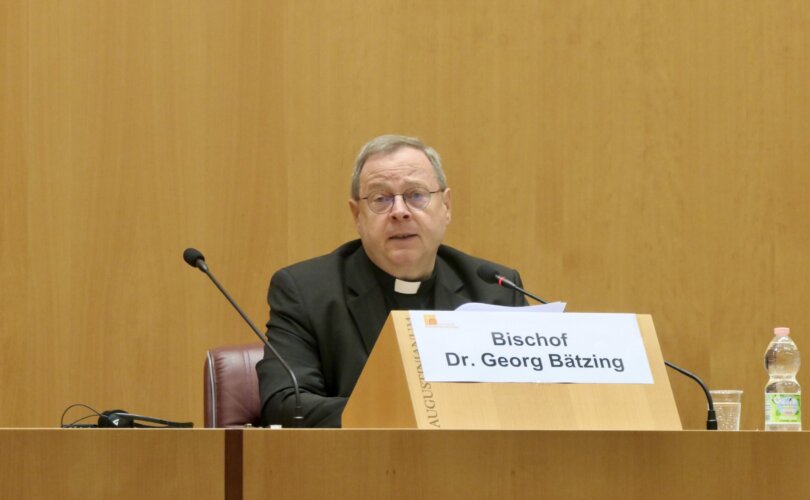 LIMBURG, Germany (LifeSiteNews) — The head of the German bishops’ Conference (DBK) introduced binding guidelines on sexual education for all parishes in his diocese that force them to accept and promote homosexuality and transgenderism.

According to these 10 guidelines, “there is diversity in sexual identity and orientation.” The guidelines furthermore state the following:

The appreciative handling of these differences and diversity should be actively promoted in the parishes and institutions. The choice of lifestyle is to be respected as the result of an individual and personal decision. It is to be recognized when partners take responsibility for each other in mutual fidelity and care. Furthermore, we welcome it when couples wish to place their partnership under the blessing of God.

The guidelines were authorized by Bishop Georg Bätzing, who heads the heterodox Synodal Way as well as the DBK, on May 17, 2022, but they were only made public Tuesday night during an online event from the diocese of Limburg, according to katholische Nachrichtenagentur (KNA).

“Every person has the right to sexual self-determination and the free choice over their own life decisions,” the guidelines state. “This must be promoted and respected.”

“Sexual self-determination” is apparently also meant to include transgenderism, as the guidelines mention that there are some people who “feel neither as a woman nor as a man.”

According to this passage, priests would be forbidden to call to repentance Catholics who engage in sinful sexual acts, including homosexual acts, since that would “impair or harm” them “in their sexual self-determination.”

Furthermore, it is impossible for the Church to change its teaching on homosexual acts since they are “intrinsically disordered” as the Catechism states. These acts are therefore always sinful regardless of circumstances.

Homosexual acts are contrary to natural law since the natural end of sexual intercourse is the conception of a child.

Sexual desire is the natural inclination toward sexual intercourse with the opposite sex for the sake of offspring. Homosexual acts not only exclude the possibility of procreation, but they also go against the order of nature as they depart from the inclination toward the opposite sex. They only seek sexual gratification without the possibility of conceiving a child.

Katharina Döring, the “officer for family education” in the Diocese of Limburg who presented the document on sexual education, admitted that the guidelines mark a “huge difference” to the Church’s position on sexuality, which has been practiced in many cases up to now.

“We want to get to the point where it becomes a matter of course to talk about your sexual orientation without having to have any worries,” Döring said. “We want people to meet people who say, ‘You are good the way you are.'”

Döring’s statement that people need to accepted in “the way they are” in regard to their sexual orientations seems to hinge on the claim that people are “born gay” and that homosexual inclinations are an immutable characteristic, like someone’s skin color.

As demonstrated in a previous LifeSite article, this widespread assumption that someone can be “born gay” is not backed up by any valid scientific facts:

Döring stressed that “[t]he guidelines are official — they are to be implemented in institutions and parishes of the diocese.”

In November, the German bishops adopted a new Church labor law, allowing Church lay employees to live in same-sex relationships. Bätzing’s new guidelines, however, are even more scandalous, as they look to force priests in the diocese to accept and promote sexual sins rather than merely tolerating them.

Mathias von Gersdorff, head of the German office of the traditional Catholic organization TFP, wrote on Twitter that “Bätzing breaks definitively with Catholic morals and FORCES also pastors, diocesan institutions to do it.”

Von Gersdorff said in a YouTube video that the guidelines are written “in the style of a magisterial document that seeks to define.” He furthermore called Bätzing a schismatic and described him as “ultra-heretical.”

“With this document, Bishop Bätzing has founded his own church” and proclaimed “the end to all sexual morality,” von Gersdorff said.

Bätzing is the head and a thought leader in the heterodox German Synodal Path, which calls for radical change to the Church teaching. It was clear from Bätzing’s public statements and actions that he was keen on changing the Church doctrine on sexuality, as he said that the reforms “must not stop at Church teaching.” However, this solo operation, introducing radically heterodox guidelines in his diocese before the Synodal Path process is even completed, is quite shocking and reveals his eagerness to push through this agenda as quickly as possible.

It will be interesting to see if and how Rome will respond to this dissident and seemingly schismatic act, since the Holy See sent an official declaration in July 2022 stating that “[t]he ‘Synodal Way’ in Germany does not have the authority to oblige the bishops and the faithful to adopt new forms of governance and new orientations of doctrine and morals.”