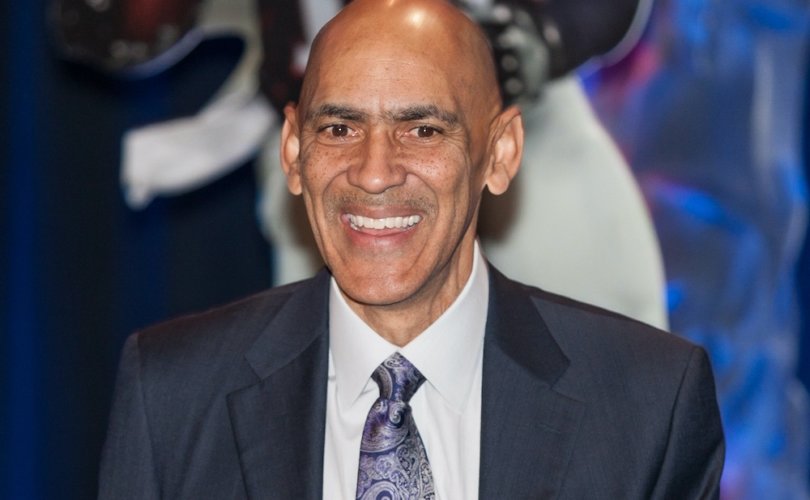 (LifeSiteNews) — A pro-life, conservative Christian sports commentator who led the Indianapolis Colts to a Super Bowl victory has come under attack from leftists for his religious and political views.

After a successful career as a coach, Tony Dungy now works as commentator for National Football League (NFL) games. But his political and religious views have drawn criticism from leftists who want him driven out of his job.

Dungy took fire from a leftist USA Today columnist after he shared and then deleted a tweet that said that some schools were putting litter boxes out for students who identified as cats. There are confirmed reports of students dressing up during the school day as “furries,” which means pretending to be animals.

This past week I posted a tweet that I subsequently deleted. I issued an apology but not everyone saw it. So I am reposting my apology here. As a Christian I want to be a force for love to everyone. A force for healing and reconciliation-not for animosity. pic.twitter.com/esew5wjUyD

Columnist Nancy Armour connected Dungy’s tweet to the suicide rates among gender-confused and homosexual children and then claimed Dungy did not understand what the Bible and Jesus believed.

“It’s these kids, these already vulnerable and in-peril kids, who Tony Dungy chose to pile on using his large, national platform. Who Dungy put further in harm’s way with his bigotry and ignorance, under the guise of his ‘Christian’ faith,” Armour wrote. Dungy’s tweet put LGBT-identifying kids in the “crosshairs,” Armour claimed.

Armour then went on to provide her theological analysis of the situation.

Dungy, like so many others, has used his faith as justification for discriminating against LGBTQ people, claiming homosexuality is antithetical to his Christian beliefs. But that’s as much nonsense as kids using litter boxes.

If you are Christian, you are supposed to follow the teachings of Christ. Not the humans who interpret them, or the churches that have taken license with them for their own gain. Christ’s own words – and nowhere in the Gospels does he say anything about homosexuality or gay marriage. What he did say was to love your neighbor as yourself, and to treat the most marginalized and vulnerable among us as you would him.

If you believe in the Gospels – again, Christ’s own teachings, not others’ interpretations of them – can you honestly say he would approve of policies that ostracize and otherize gays, lesbians and, in this case, transgender and nonbinary people? That he would praise making them feel as if they are not worthy of belonging?

Those claims are common in liberal circles. LifeSiteNews has commentary on the false claims that the Bible or Christ never condemned homosexuality.

But if his minor criticism of children possibly identifying as cats drew fire from the Left, of course Dungy’s appearance at the annual March for Life sparked further outrage.

Dave Zirin, in an essay for The Nation, called Dungy a “right-wing zealot.” He also attacked Dungy for his tweet about litter boxes.

One thing i hint at but don’t say explicitly – and I should have – is that the NFL and many at NBC celebrate Dungy (not tolerate, celebrate) because they share his politics. https://t.co/98iiHKTEAi

Zirin, repeating many of the leftist lies about religion, also criticized Dungy:

Dungy has used his devoutness as a cover for his anti-gay rhetoric and sharing platforms with unapologetic bigots. But what in the world is “religious” about bearing false witness against teachers and children with a lie that has had real-life repercussions? Every bomb threat leveled against children’s hospitals, every physical assault, bears the fingerprints of these lies. Dungy should feel shame. Instead, he is emboldened, ready to take the stage at a rally that’s been a blunt instrument for robbing people of their rights to privacy and the rights to their own bodies.

He continued in his diatribe:

Like Dungy, neither NBC nor the NFL has commented about his latest eruption. But their silence speaks volumes. It’s a silence that’s almost as loud as Dungy’s hateful blather, almost as loud as the thousands of people descending upon Washington—some mandatorily—to celebrate a fascistic, discredited Supreme Court and the loss of our rights. It’s shameful. And we should not be afraid to say so.

READ: Tens of thousands demand end to all abortion at first March for Life since fall of Roe

Several Republicans defended Dungy in response to the criticism from Zirin.

“The woke left and the corporate media hate and try to cancel anyone who is pro-life,” Senator Ted Cruz tweeted. “Tony Dungy is a hero. Standing firmly for the rights of the unborn doesn’t make anyone an extremist.”

Senator Rick Scott called Dungy a “man of faith and integrity who is standing up for his beliefs,” the Washington Times reported.