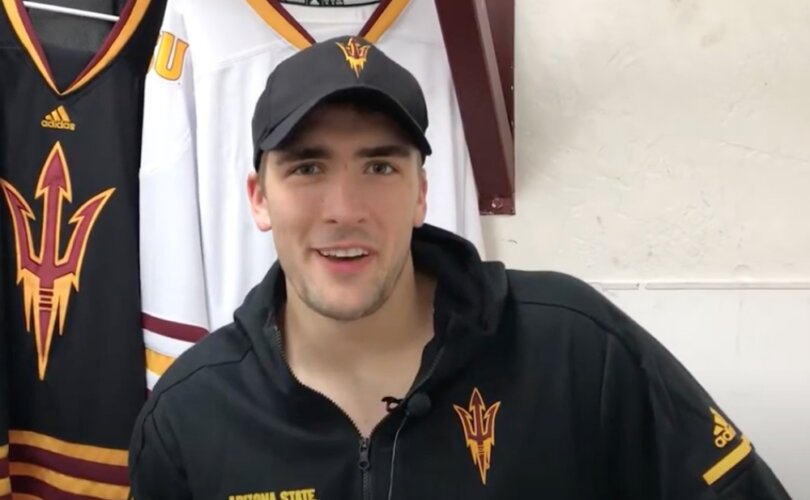 Louie Rowe while at Arizona StateScreenshot/YouTube

(LifeSiteNews) – A minor league hockey player is refusing to be silent about the LGBT agenda after getting dismissed from his team for pointing out another club’s embrace of wokeism.

“It’s a full-on mafia. They have organizations under their grasp,” 28-year-old Louie Rowe told LifeSite yesterday. “If it had any grounds in morality, you would not need power to force acceptance.”

Rowe’s contract with the Illinois-based Peoria Rivermen was terminated just hours after he mocked the Michigan-based Kalamazoo Wings on social media last week.

“I knew the Kwings were soft but I didn’t know they were gay, trans and soft,” he tweeted in response to the Wings making a rainbow version of its logo on Twitter and then brushing off a fan who complained.

I knew the Kwings were soft but I didn’t know they were gay, trans and soft 🤣

Rowe is a native of East Lansing, Michigan and attended Arizona State University. He competed against the Wings when he played for the Fort Wayne Komets. He sat out of professional hockey for the last several years due to the league’s draconian COVID policies.

Rowe explained to LifeSite that he’s been exposing child grooming and cultural Marxism on Twitter and Instagram for years although he’s faced occasional censorship. He says that when he was with Fort Wayne there were no issues with his online activism.

Twitter jail was fun… glad to be back though ☺️ pic.twitter.com/83Nd3dSb1h

Rowe told LifeSite that his coach Jean-Guy Trudel texted him on the night that he sent his Tweet. He’d just played in the team’s game earlier in the day.

Here’s how conservative hockey player @LouieRowe17 found out he was dismissed from the pro-LGBT @Peoria_Rivermen … in a text message from his coach Jean-Guy Trudel, who then blocked him. pic.twitter.com/DMSasorWOe

“I had a great relationship with my coach, my teammates, all of us. My coach sent me this message and then blocked me. The next day my possessions were in a garbage bag waiting to be picked up. I hadn’t been with the team for 14 days, so I wasn’t entitled to any severance pay. You don’t make a lot of money playing minor league hockey.”

— Article continues below Petition —
Stand with brave priest who was SUSPENDED after defying the LGBT agenda against his abbot’s wishes!
Show Petition Text
12763 have signed the petition.
Let's get to 15000!
Thank you for signing this petition!
Add your signature:
Show Petition Text

TYT Sports produced a YouTube video on Rowe accusing him of being a “bigot” who promotes “conspiracy theories.”

The Rivermen are an affiliate of the NHL’s St. Louis Blues.

Rowe, who is a practicing Catholic, remains undeterred. In fact, he says he’s received “a lot of support from ordinary people as well as players this week.”

“The dam is cracking. People don’t want this. Just look at what Ivan Provorov did.”

Provorov is a Russian-born defenseman for the NHL’s Philadelphia Flyers. He refused to take the ice for warmups during a Pride Night game where players were forced to wear rainbow-colored jerseys. Despite a torrent of criticism from corporate media outlets, Provorov has stood firm in his defiance. His own No. 9 jersey sold out online on multiple websites this week.

“Regular people are starting to look at this and say, ‘Something is wrong, something is just not right.’ The LGBT agenda is being forced on other people, and it’s really rubbing people the wrong way. I think the tide is starting to turn,” Rowe said.

Rowe told LifeSite he isn’t sure what will come next, but that he’s open to whatever God wants.

“I don’t know what my future in hockey is going to look like. I’ve had a couple of teams and other leagues reach out. But to be honest, I’m not very interested. I might try to explore some options overseas. We’ll see about that, but I’m just going to be patient and, in my mind, if this season’s over, it’s over. I have other companies that I run. I’ll be alright.”