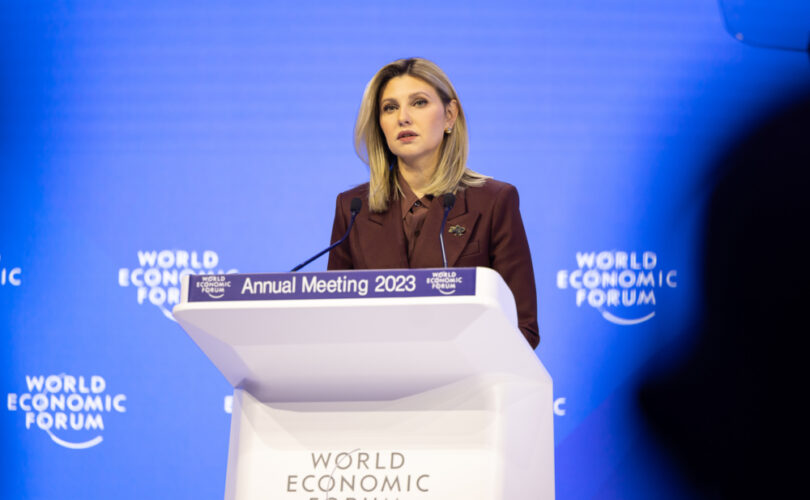 Olena Zelenska delivers a speech at the World Economic Conference in Davos on January 17, 2023Twitter/Screenshot

(LifeSiteNews) — As the Ukrainian president’s wife addressed the World Economic Forum (WEF) on January 17, the issue of the sanctity of the family bond was invoked. In a preliminary address, Olena Zelenska called for an intensification of the Western world’s efforts to win the war in Ukraine.

Striking a harmonious note with the message of permanent crisis favored by the WEF, she remarked:

We are facing a threat of the collapse of a world as we know it, the way that we are accustomed to it and to what we aspire.

Eight minutes and fifty-five seconds into her speech, she speaks of a crime – the violation of the bond between a mother and child.

Millions of people are torn apart from their families in the Russian occupied areas.

The cause of the family and of Ukrainian children was echoed in her own social media comments on the speech, and on that following a meeting with EU Commission President Ursula von der Leyen.

Had the honor to present 🇺🇦 peace formula at @WEF in Davos. For us – people are the most important thing. Ukrainian peace means parents and children who came back from frontline. Reunited families. Children – safe at home. I believe it will happen in 2023. We will succeed. pic.twitter.com/XIPmNG87Fa

Invited @vonderleyen and @EU_Commission to join the new project of my foundation. Ukraine needs 🇪🇺 financial support to develop family-based forms of care in order to get rid of orphanages. A home and a family for every child – the most worthy goal to which we should go together.

There has been no mention of the long established and lucrative sale of babies through Ukrainian surrogacy services, which saw Ukraine become a world leader in the sale of babies taken from a mother who would never see them again. The EU is silent on the matter, with Ursula von der Leyen saying:

European countries are providing more and more critical weapons… there will be no let-up in our steadfast help for Ukraine.

This is despite the fact the EU itself condemned surrogacy in 2015. Her speech, given at the WEF and following that of Mrs. Zelenska, did not allude to the issue at all.

There are others in Ukraine facing the collapse of a known world, which is the dark underworld surrounding Ukraine’s surrogacy trade. These are the Westerners awaiting the export of the children and the frozen embryos for which they have paid, and whose delivery has been interrupted by the war in Ukraine.

No mention is made of this moral outrage other than it being some kind of inconvenient interruption of the supply chain. Meanwhile, the adoption of orphans by Russia is framed as a war crime to generate yet more support for financial and military aid to Ukraine.

Olena Zelenksy adduced the controversy over the Russian adoption of war orphans, in a call reminiscent of the “babies ripped from incubators” story used to promote the first Gulf War. What the Russians describe as an act of compassion and generosity is framed as forced abduction, as an abuse of the rights of children. It is hard to consider such an objection seriously from a country which leads the world in selling babies.

The interruption of this trade, which includes in the West the sale of babies to both single and “married” homosexuals and transsexuals, was first reported as a result of COVID restrictions. Now the issue is the war, which has broken in Ukraine the lucrative business of the reduction of human life to a novelty product.

Various companies in the West, such as the disturbingly titled Growing Families and Brilliant Beginnings in the U.K., have availed themselves of the cheap grey market in children offered by Ukraine. It is a practice which is illegal in most countries in the world, and one with a long history of exploitation and illegal activity.

Circle Surrogacy, based in the U.S. but with a London office in the U.K., proudly announces:

We were founded by a gay man who aspired to have his own family, and the strategic programs and partnerships we have in place are designed to make gay surrogacy possible. We’ve helped gay and trans individuals and couples become parents for over 25 years, and about half of the parents through our program are part of the LGBTQIA+ community.

The British Surrogacy Center boasts of being founded by “Britain’s most famous gay dad.”

It is unsurprising that this business has grown in a legal culture which sees accusations of child rape as no barrier to adoption. In fact, in the horrific case of “married” homosexuals William Dale Zulock Jr. and Zachary Zulock, such accusations can expedite a “‘faster than expected’ adoption process.”

Their case is due in court later this month. They face charges relating to the abuse of two boys they adopted in 2018. A months-long investigation by Townhall has discovered what they describe as an LGBT pedophile ring, in which the homosexual men used their adopted children to produce child pornography and prostituted them to fellow homosexuals through the use of dating apps and social media contacts.

An ideology which sees no greater problem concerning the sale of babies than a delay in the delivery of the goods is so obviously wicked as to beggar belief. It is one which will defend the right of the depraved to adopt their future rape victims. It is one which will cynically invoke the defense of children whilst presiding over their sale. It is one which endorses profit at the expense of the most profound human misery – the permanent estrangement of a child from its mother, and the transfer of the miracle of birth to the production line of the laboratory. It is one which has no moral limits to the desires and the demands it wishes to stimulate and satisfy by the reduction of every dimension of human life to a product.

It will make an emotional appeal to the very sacred bonds it seeks to destroy – those between mother and child, and between the family and their children. It is a sinister manipulation of the best instincts of humanity to promote their replacement with the worst. So far, so WEF.