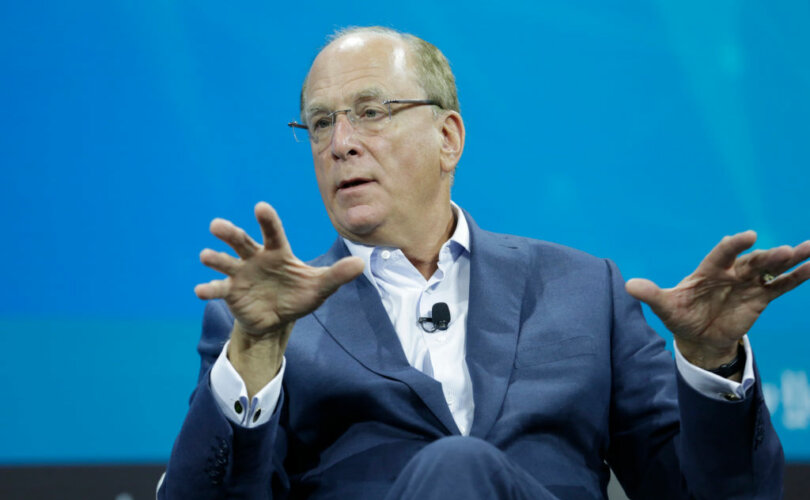 Larry Fink on stage at the 2022 New York Times DealBook on November 30, 2022. in New York CityPhoto by Thos Robinson/Getty Images for The New York Times

(LifeSiteNews) — For an economic forum, the 2023 Davos conference said little about the destructive policies of the western world’s economic management.

Instead, it gave a platform to Tony Blair to advocate for the forthcoming World Health Organization (WHO) power grab, under the aegis of a global vaccination database. This is, of course, a world surveillance state achieved by means of manufactured panic.

Climate alarmism too is a means of molding public compliance to the agenda of a vast machinery which destroys everything but itself. In this piece we will examine how the influence and practices of one major World Economic Forum (WEF) partner tie in with the broader technocratic blueprint of the masters of the future.

The WEF is a means of attracting the “favored stakeholders” of Klaus Schwab to implement a broadly post-human agenda which will transform our way of life permanently. These stakeholders include world leaders, heads of banks and NGOs such as the World Health Organization, and, of course, the Gates Foundation.

One name with which readers will be familiar is that of BlackRock, headed by Larry Fink. His vast investment firm, which has been said to co-own the world with Vanguard, enjoys an influence which reaches far beyond the markets and deep into the management of modern society.

Why have we heard so little about this firm? Information warfare is a peacetime staple in the west and it is prosecuted by the technocrats who direct state level and global bureaucracies at mass scale. Whether public or private, government or corporate, the messaging is the same as is the managerialist model which selects for suitable components – such as Jacinda Ardern who is rumored to be joining BlackRock – and against talent, character, principle, and what would commonly be understood as merit.

It is for this reason that many of our leaders are mediocrities. Trudeau, Macron, Sunak, Biden, Von der Leyen, Ardern – these are not people who have won their position on their intellectual prowess. They are a safe bet, and it is the house that is backing them. The house in question is not that of the Congress, that of Parliament. It is the power of vast non-state actors whose sheer scale allows them to shape our experience of life along technocratic lines which favor our better management.

It is we, the ordinary people, who lose at the table of this casino. The policies of BlackRock, with stakes in mainstream media, the pharmaceutical, and defense industries, as well as managing the largest global fund at $10 trillion, which are enforced by their sheer scale are designed to undermine your way and quality of life.

BlackRock’s influence makes profits for them and, in promoting policies degrading your existence, commends you to the nightmarish plans of their friends in the WEF.

In a recent fact-check by Reuters the claim that BlackRock is buying up U.S. single family houses was roundly denounced as false. Who then is described as “America’s landlord?” Blackstone would be the answer. A Wall Street equity firm that is now the single largest owner of real estate in the world, it was founded by Stephen Schwarzman and Pete Peterson. BlackRock owns a 5 percent stake in the company. What is more, according to this Deutsche Welle report of 2015:

BlackRock was born in the late 1980s, as a subsidiary of The Blackstone Group, a multinational private equity firm.

It should come as no surprise that a company like Reuters would smugly dismiss charges against BlackRock on a Blackstone technicality. Perhaps the company’s association with Hillary Clinton has given Reuters pause.

Why does this global behemoth matter? Blackrock has admitted it is actively promoting policies to end the 40-year-long Great Moderation. This is a term for the economic good times, ushered in by Reagan and Thatcher, which we mistook for normal life in the West.

BlackRock’s recently published economic manifesto named The Outlook, dubbed “a new investment playbook,” described the Great Moderation as “the four-decade period of largely stable activity and inflation,” and of “steady growth.” This period is over, replaced by an age of “brutal tradeoffs” demanded by new “productive constraints,” labor constraints, and geopolitical rivalries.

An end to aspiration, property ownership, privacy, to competent institutions and increasing social breakdown are features – and not bugs – of BlackRock’s strategy. Its immense power is used to promote policies which degrade the western living standard as well as destroy the competence in the bureaucracies which manage it, rendering public and private institutions increasingly incapable of dealing with the social fragmentation and poverty these policies create.

Here are some lengthy extracts from an excellent piece by Scott Shepard, a fellow at the National Center for Public Policy Research and Director of its Free Enterprise Project. He wrote at RealClearMarkets on January 18, 2023:

What the [BlackRock] Outlook says about energy prices is internally contradictory  BlackRock admits that ‘the transition to net-zero carbon emissions is causing energy supply and demand mismatches.’ This is coyly worded tripe. What the Outlook authors are trying very hard to avoid saying  is that the political-schedule push away from reliable carbon-based energy to unreliable (and dirty, and demanding of unfree labor) energy sources has caused energy scarcity and unreliability.[Emphasis added].

So, BlackRock knows the net-zero policies it pushes are creating chaos and decline.

But they couldn’t write that, of course, because BlackRock actively and aggressively pushes companies to move away from the reliable and affordable stuff, thereby causing the scarcities and price increases that it po-facedly laments. [Emphasis added].

As a mass scale organization concerned with its own power and preservation alone, BlackRock simply ignores democracy as an irrelevance:

As for the other factors the Outlook mentions, BlackRock also doesn’t consider the possibility that there might be ‘significant energy policy action’ by voters and polities to restrain the move to net-zero on political schedules, with the broad run of votes and citizens deciding that they’d prefer to stick with reliable and affordable fossil fuels. They ignore entirely that this is already happening in the United States and around the world.

So does BlackRock simply want to exploit an energy crisis they have helped to create?

No, no. Larry Fink and BlackRock want to ‘force behaviors,’ like getting to net-zero at speeds that will cause energy to be so costly and unreliable as to destroy the Great Moderation.

These “forced behaviors” are not limited to net-zero deindustrialization and the destabilization of the world economy.

Shepard’s analysis includes criticism of the consequences of BlackRock’s pressuring of western firms to adopt inefficient and ruinous green alternatives, which is undermining the strategic dominance of the USA.

BlackRock pressures western companies like Exxon to give up reliable-energy projects that then get snapped up by Chinese companies. By such methods BlackRock exacerbates the Great Moderation-killing effects of global re-fragmentation.

His conclusion is an indictment of the doublespeak typical of corporate communication, which employs public relations just as it does “customer service” – as a form of passive aggressive self-defense.

In its Outlook, BlackRock ostensibly mourns the passing of the Great Moderation, but in fact, and in each relevant instance, it is hastening its demise and heightening the negative consequences of its passing.

Shepard ends with a query:

The question before this house, then: Why?

The actions of BlackRock make sense if we understand that every organization at mass scale eventually develops into one concerned only with its own perpetuation. That this survival may come at the expense of everything else is insignificant. The strategy of BlackRock is that of any bureaucracy combined with advanced technology – it is a machine concerned only with itself, and whose culture cancels all others.

This is the reason corporations are “woke” – they have the same one-dimensional and solipsistic view as the most histrionic of street shriekers. To them all, destruction of your normal way of life is advantageous. It is a goal, not a side effect.

The reason Shepard cannot answer his own question is that he likely approaches the actions of BlackRock from a human point of view. There is no sane explanation for such a leviathan to exist at all, let alone to be free by dint of leveraged debt to destroy everything that it is not. With the open admission of their destructive agenda and its devastating consequences BlackRock has exited the shadows.

It remains to be seen whether its influence – or existence – can survive exposure to the light.