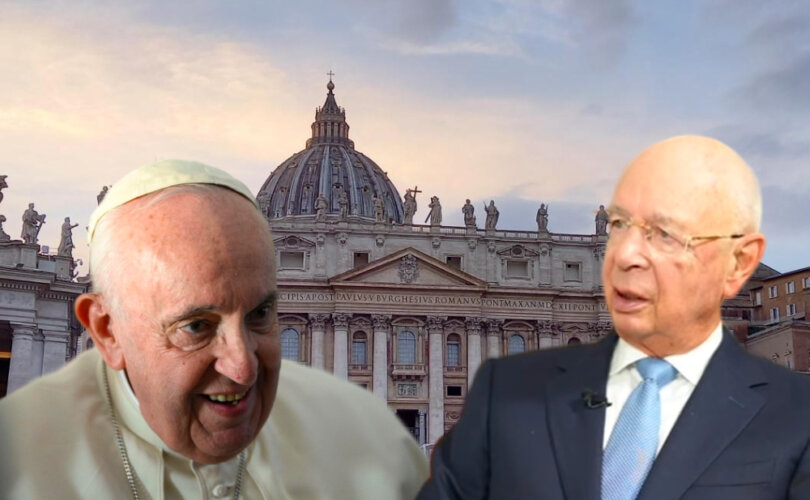 VATICAN CITY (LifeSiteNews) — As the annual World Economic Forum takes place in Davos, Switzerland – gathering the global elite, wealthy and a host of anti-life and anti-freedom advocates – the Vatican’s news outlet is promoting the event as “presenting solutions” to world “crises.”

In an interview published January 19 on Vatican News, the local Catholic priest in Davos spoke about the World Economic Forum’s annual meeting. It is taking place in its customary January spot, after having been held online in 2021 and then in May last year.

Father Kurt Susak, the parish priest in Davos for over ten years, stated that “everywhere you hear about crises. The world is somehow in crisis mode.” In the face of such crises, he added, the attendees at the WEF are “quite consciously” counting on the event “presenting solutions.”

Susak added the the WEF risked losing “its credibility and legitimacy if this meeting did not now also present solutions that are recognizable to the people and lead to an improvement in the many conflicts and challenges.”

Exactly what kind of solutions might be presented, Susak did not mention. However, as LifeSite has extensively reported, the WEF meetings have already highlighted how “access to abortion” is a key issue.

A moderator at one of the sessions briefly talked about the WEF’s “women’s health initiative,” a project by the globalist organization that also pushes abortion and contraception under the guise of “reproductive health.” The initiative aims, among other things, to reduce “unintended pregnancies and unsafe pregnancies.”

Among the numerous partner organizations for the pro-abortion initiative are leading companies such as Johnson & Johnson, Merck, CVS Health, Save the Children as well as the Bill and Melinda Gates Foundation.

So far, the WEF’s Davos meeting has raised considerable concern for family and freedom advocates. In addition to the overt promotion of abortion, countries such as Poland and Hungary have come under attack there for their stance defending families. The Executive Director of Human Rights Watch,Tirana Hassan, accused the two countries of being “divisive,” claiming that they “increase acts of violence and discrimination” by their policies.

Building on the widespread rollout of the COVID-19 injection, linked to digital vaccine records in many countries, former UK Prime Minister Tony Blair then argued that “proper digital infrastructure” would be necessary in tackling another “pandemic,” in order to “know who has been vaccinated and who hasn’t been.”

However, in outlining some concerns about the Davos meeting, Fr. Susak did not mention such attacks on the unborn, the family, or freedoms. Instead, he noted “traffic jams,” the general expense of running the event, and a lack of transparency.

Vatican News paraphrased Susak’s comments, writing that “[h]e notes that everything is overpriced; there is an enormous amount of traffic with accompanying traffic jams and long waiting times; and says the usual way of life in the area is seriously disrupted during the time of the WEF.”

Drawing from Pope Francis’ oft-used themes regarding money usage, Susak also noted “the enormous economic costs” related to the Davos event, and that people question “whether it is worth the cost, whether it is necessary, and what the ultimate outcome of the meeting should be.”

According to Vatican News, Susak added that “very little ultimately is made public” and cited a need for more transparency.

These points aside, Susak nevertheless noted that there were many “positives” to the annual meeting of global elites. The local schools schedule skiing, which “gives the students a great deal of pleasure.”

Susak also appeared to suggest that the event now overshadowed traditional Christmas events in the region. Vatican News wrote that:

Previously, Christmas was associated with Christmas and ski tourism, he said. “Before that, work is done, preparations are made, all the security measures are organized, carried out. The hotel industry, the restaurant industry, the craft companies, everything is working at full speed. And this testifies to the great cohesion that Davos presents here.”

Susak revealed that for a number of years the parish has conducted “silence and prayer” events during the WEF meetings. Such events “gathered people together to pray precisely for the intention that good decisions might be made for a more just and peaceful world,” he stated.

Now the events are ecumenical: “Catholics, Reformed Christians, and evangelical churches” all gather in the “silence and prayer” events, Susak said.

The Vatican has in fact had a close, although little known, relationship with the WEF. Pope Francis has signaled his intimacy with the WEF’s globalist founder Klaus Schwab, by sending an address to the WEF four times in his eight-year pontificate, and allowing an annual Vatican roundtable at Davos, the WEF’s annual conference site in Switzerland.

As re-iterated by Susak, Vatican officials attending the Davos meeting have included Cardinals Pietro Parolin, Peter Turkson, and Michael Czerny. The priest added, however, that this year there were no Vatican delegates, suggesting that this was a “statement that Rome is making to the World Economic Forum.”

In a 2021 interview with Vatican News, Susak revealed that Parolin had gone in place of Pope Francis, who had been personally invited by Schwab for the event’s 50th anniversary.

READ: Pope Francis tells ‘global governance’ conference there can be no ‘return to normality’ after COVID

“I really had to be positively surprised at how much interest there is in the Church at the WEF, for example, there is a meeting called ‘Vatican meets WEF’ and there I experienced great interest from all over the world,” Susak stated in 2021.

Vatican News wrote that Schwab had himself been to the Vatican.

Indeed, Pope Francis’ actions and public interests align closely with Schwab and the globalist elites and the WEF. Back in December 2020, Francis used the phrase “build back better,” the slogan synonymous with globalist polices. The phrase was the name of Joe Biden’s website after the election (BuildBackBetter.gov), on which he claimed to be “restoring American leadership.”

Shortly after that, Francis joined with companies across the globe to promote a new “economic system” of capitalism in line with the Sustainable Development Goals, despite their link to abortion, and his own call for simple, austere living.

This was then followed up by a partnership between the Vatican and the U.N., in which the Pope once again showed his globalist tendencies by promoting education about “sustainable lifestyles,” “gender equality,” and “global citizenship,” yet avoiding any mention of the Catholic faith.

Such deepening ties with globalist corporations and leaders lends further credence to beliefs that Pope Francis is aligned with the WEF’s call for a “Great Reset.” He has referenced a “supranational common good” and said that “there is need for a special legally constituted authority capable of facilitating its implementation.”

The pontiff re-issued that call in spring 2021. In an address to the World Bank and the International Monetary Fund, he echoed the sentiments expressed by Schwab. Schwab’s proposed anti-Catholic “Great Reset” is underpinned by a focus on a green financial agenda, the “withdrawal of fossil-fuel subsidies,” and a new financial system based on “investments” which advance “equality and sustainability” and the building of a “‘green urban infrastructure.”

Indeed, at last year’s delayed Davos meeting, a Vatican official declared that the Catholic Church is “committed to the various issues considered at the forum.”

Father Leonir Chiarello, Superior General of the Congregation of the Missionaries of Saint Charles (Scalabrinians), identified eight key themes of the meeting: “climate and nature, fairer economics …  health and healthcare, global cooperation, and society and equity.”

He referenced Pope Francis’ Laudato Sí and Fratelli Tutti as examples of how the Catholic Church was adhering to the globalist agenda on particular aspects.