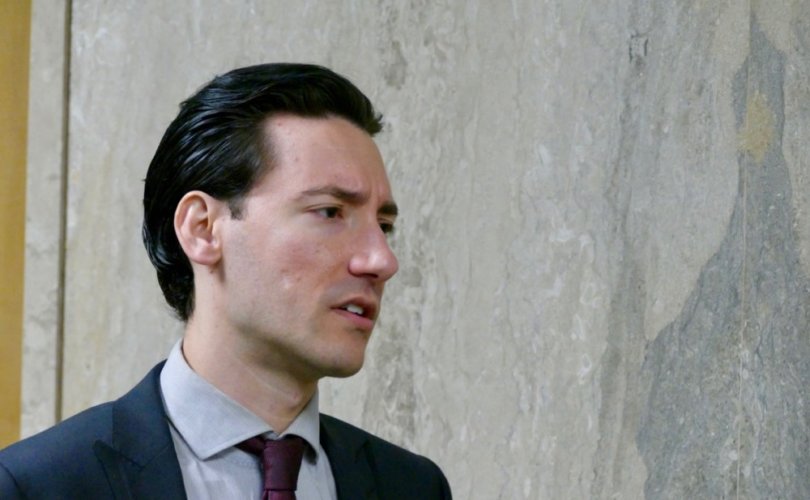 December 24, 2019 (LifeSiteNews) ― It has been a record year for LifeSiteNews. We’ll soon be reporting on our traffic in 2019, and the figure may astound you. Naturally, this milestone would not have been possible without the pro-life newsmakers whose stories or tips grabbed the attention of the world. Here, in alphabetical order, are 12 of those whose work or sacrifice on behalf of the unborn, families, or the Christian faith has inspired reporters and readers alike.

Cardinal Raymond Burke ― The Wisconsin native continued to be a true pro-life hero, leading thousands of people in the March for Life in Rome in May. As the Catholic Church across the world still reels from the ongoing sex abuse crisis, financial scandals and doctrinal confusion, Cardinal Burke frequently makes bold statements in defense of orthodox Catholic doctrine.

Michael Del Grande  ― The Toronto Catholic District School Board Trustee came under fire this year for his defense of Catholic teaching on human sexuality and the human person. In the face of colleagues more dedicated to political correctness than to the souls of Catholic schoolchildren, in December Del Grande dared to call gender ideology “evil.”

David Daleiden ― The young pro-life journalist’s long Calvary through the American court system continued this year as the Planned Parenthood empire struck back against his exposé of their trade in the bodies of the unborn babies they slaughter.

Donna Durning ― The veteran pro-life witness was hospitalized after an attack outside an abortion clinic in Louisville in April. Despite video showing Durning being knocked to the ground, resulting in a head wound and a broken thigh bone, a grand jury refused to indict her assailant.

Madeleine Jacob ― The LifeSiteNews digital marketing assistant went above and beyond the call of her usual duties when she grabbed a notebook to report on the James Younger case in October. Madeleine’s courageous reporting brought national attention to the hitherto under-reported plight of the little boy whose mother told him was a girl.

Cardinal Gerhard Müller ― Suddenly dismissed as Prefect of the Congregation for the Doctrine of the Faith in 2017, the German prelate has joined Cardinal Burke in bolstering the wavering confidence of Catholics. In February, the cardinal released his “Manifesto of Faith,” believed to be an answer to the doctrinal confusion sparked by the current pontificate.

Siobhan O’Connor ― The Diocese of Buffalo whistleblower who alerted media to the seriousness of the local clerical abuse crisis continued her fight on behalf of victims this year. Among other important interventions, she spoke up in January against the Vatican’s decision not to address clerical predation on young priests and seminarians during its clerical abuse summit. In December, when embattled Bishop Richard Malone finally tendered his resignation, O’Connor protested bureaucratic balderdash that the move was “an early retirement.”

Professor John Rist ― A professor emeritus and visiting scholar at important universities around the world, the Catholic convert and philosopher continued to take an active role on behalf of orthodoxy. In February, Rist alerted LifeSiteNews to a speech given by Vatican media spokesman Fr. Thomas Rosica that ultimately led to the end of the cleric’s career. In April, Rist signed a letter accusing Pope Francis of heresy, leading to his banishment from the Augustinian Patristic Institute in Rome. Rist had been a part-time visiting professor there for 15 years. Undaunted, Rist was one of 100 Catholics who signed a letter rebuking Pope Francis for his part in the veneration of the Earth Mother, or Pachamama, during the Amazon Synod.

Nick Sandmann ― This young man and his fellow students from Covington Catholic High School in Kentucky went to the National March for Life in Washington, D.C. in January. While waiting in front of the Lincoln Memorial for buses to take them home, the boys were racially abused by a group of extremists called the Black Hebrew Israelites and approached by a Native American activist who later accused them of racism. Irresponsible reporting by the mainstream media led to the national, and even episcopal, vilification of the teenaged Sandmann, who was soon exonerated by a thorough investigation. Sandmann is now suing CNN, NBC and The Washington Post.

Alexander Tschugguel ― While Catholics read with increasing unease of challenges to Catholic tradition and doctrine during October’s Synod of Bishops for the Pan-Amazonian Region, this young married Austrian took matters into his own hands. With an anonymous colleague, he removed statuettes identified with the pagan goddess Pachamama from a Catholic church in Rome and threw them into the Tiber. Inspired by the enthusiastic response, which eventually included the praise of prelates, Tschugguel founded the St. Boniface Institute to help other laity speak out for the Catholic restoration. In late November, he led prayers outside Vienna’s cathedral in reparation for a sacrilegious event being held inside.

Unplanned ― The film version of Abby Johnson’s memoir Unplanned: The Dramatic True Story of a Former Planned Parenthood Leader's Eye-Opening Journey across the Life Line made headlines throughout 2019. LifeSite wrote in January about the trailer’s release and in December about a teenage school trustee’s objections to showing it in Catholic high schools. In between, Unplanned sparked controversy, filled cinemas, grabbed a top spot, and ― most important ― saved babies.

Archbishop Carlo Maria Viganò ― The former papal nuncio to the United States was catapulted to worldwide fame in 2018 when he accused senior prelates in the Catholic Church of covering-up former Cardinal Theodore McCarrick’s serial predations on young men. This year, the archbishop continued to make headlines by exposing another Vatican cover-up and by asking the former cardinal to repent. In May, Viganò directly accused Pope Francis of lying when the pontiff insisted that he knew nothing of McCarrick’s sexual misdeeds. Although currently in hiding, the archbishop has frequently spoken out against corruption and doctrinal confusion in the Vatican this year. In the wake of the Synod of Bishops for the Pan-Amazonian Region, he joined those protesting the veneration of Pachamama among some Catholics.