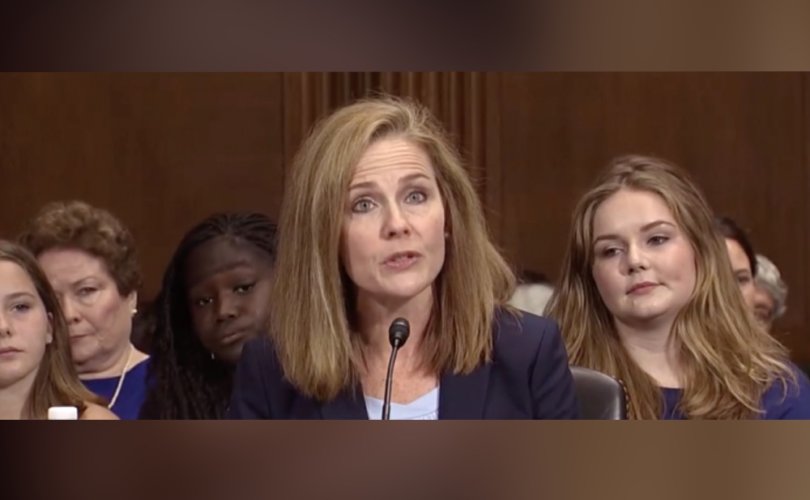 WASHINGTON, DC, July 5, 2018 (LifeSiteNews) — In less than one week, President Trump’s field of potential Supreme Court nominees to fill the vacancy left by Justice Anthony Kennedy’s surprise departure has quickly gone from over 20 to just three.

The White House will announce the President’s nominee on Monday, July 9, less than 72 hours away.

And of the three left standing, one stands out: Federal Judge Amy Coney Barrett.

Iconic radio talk show host Rush Limbaugh has often said that liberals “always let us know who they fear” through their unhinged attacks. Among all the potential nominees mentioned a little over a week ago, Amy Coney Barrett immediately attracted the most flak from the left.

“The facts of Barrett’s life — that she is a mother of seven children, and that when she speaks about her Catholic faith, she speaks about God as if she really believes in His existence — will provoke nasty and bigoted statements from Democratic senators and liberal media personalities. Again.”

The sputtering from the left brings one thing into crystal-clear focus: The guardians of the sexual revolution – those who fight to protect and promote abortion, homosexuality, transgenderism and sex without consequences – fear no one more than a strong, intelligent Catholic dedicated to living their faith – especially if that Catholic is a woman.

So here are a dozen reasons to look forward to Judge Amy Coney Barrett as the next United States Supreme Court Justice:

Amy Coney Barrett has been perfectly clear—she wants to overturn #RoevWade. She also belongs to a group that both refers to women as “handmaids” (no, we're not joking) & believes that husbands are in charge of their wives. She's on Trump's #SCOTUS shortlist. #WhatsAtStake pic.twitter.com/96K2hzyi0u

Trump promised to only appoint biased justices who will overturn Roe v. Wade. Amy Coney Barrett is at the top of that list. #StopBarrett #SaveSCOTUS pic.twitter.com/YjtkxfGtf1

Last fall, Senator Dianne Feinstein attempted to disqualify Coney Barrett during her confirmation hearing for the Federal bench because of her Catholic faith, saying, “The Dogma lives loudly within you.”

More than anything else, Feinstein will be forever remembered for her oddly-worded statement to Barrett.

4.) Likewise, Senator Dick Durbin a fellow Catholic, may have illegally grilled Barrett during her Senate confirmation hearing last fall, attempting to impose a religious litmus test on the nominee:

5.) Senate minority leader Chuck Schumer has attempted to use scare tactics to make her a toxic choice: “If chosen as the nominee, she will be the deciding vote to overturn Roe v. Wade.”

The bottom line: Judge Barrett has given every indication that she will be an activist judge on the Court. If chosen as the nominee, she will be the deciding vote to overturn Roe v. Wade and to strike down pre-existing conditions protections in the ACA. #WhatsAtStake

She disagrees with “stare decisis” – the idea that cases like Roe v. Wade are settled law in the courts – and instead has said she wants “space” for “reargument.” https://t.co/JcWyOx4uZl

6.) The New York Times published a hit piece, hoping to derail Barrett’s 2017 confirmation. The Grey Lady was disturbed that Barrett’s Senate interrogators had failed to call attention to her affiliation with an ecumenical Christian community, the People of Praise in South Bend, Indiana.

In particular, the Times worried that some members of the group “swear a lifelong oath of loyalty, called a covenant, to one another, and are assigned and are accountable to a personal adviser, called a ‘head’ for men and a ‘handmaid’ for women. The group teaches that husbands are the heads of their wives and should take authority over the family.”

They no doubt hoped to draw a correlation between the community’s terminology and The Handmaid’s Tale.  Their idea didn’t catch on.

On Tuesday, MSNBC hosts and correspondents displayed their religious intolerance by attacking the faith of potential Supreme Court nominee Amy Coney Barrett. During one hour after another, Barrett’s membership in a faith group was ridiculed and listed as one of her “potential weaknesses” in a Senate confirmation fight.  […]

In the 10:00 a.m. ET hour, anchor Hallie Jackson listed Barrett’s faith as a “weakness” when it came to confirmation: “But, when you look at some of the potential weaknesses here. This People of Praise, reported ties that she has. An interesting religious group that, for example, labels heads of household, the men, the ‘heads,’ the women the ‘handmaidens,’ along those lines.”

Just prior to that, Politico Senior White House Reporter Josh Gerstein worried: “Amy Barrett would be among the more provocative possible nominees because of her skepticism about the Roe v. Wade decision is basically a matter of public record. So the White House would be making, I would say, a pretty edgy nomination if they go in that direction.”

8.) Ruth Marcus at the Washington Post says she “is a danger”:

Of all the potential Supreme Court nominees that President Trump is considering, the one who seems most inclined to undo Kennedy’s work and overturn Roe as completely and quickly as possible is Amy Coney Barrett, a 46-year-old newly minted (last November) federal appeals court judge.

In particular, Marcus is worried that Barrett’s “flexible” understanding of stare decisis, a legal principle which holds that precedent, i.e., former decisions such as Roe v Wade, should weigh heavily in decisions and should not be overturned.

When “a prior decision clearly misinterprets the statutory or constitutional provision it purports to interpret, the court should overrule the precedent,” [Barrett] writes. “Reliance interests count, but they count far less when precedent clearly exceeds a court’s interpretive authority.”

In other words, Barrett believes that the meaning and intent of the United States Constitution should outweigh precedent, eclipsing stare decisis. The Supreme Court has done just that, overturning its earlier decisions such as Plessy v. Ferguson.

9.) CNN’s Chris Cillizza insulted Amy Coney Barrett, and by association, the country’s entire female population, by deploying a misogynist attack, suggesting that if she were chosen as the nominee, it would be because of her “appearance.”

Twitchy in turn asked: “Does the smart lady scare you?”

One of the many Tweets critical of Cillizza said that he “reduced her to looks. Disgraceful.”

10.) The very liberally-minded folks at Slate.com alleged that Barrett belongs to what looks like a “cult.”

Law professor and Senate candidate Richard Painter tweeted the old Times story this weekend and said People of Praise “looks like a cult”; another prominent critic one-upped Painter by calling it a “secretive religious cult.”

And in fretting that “people of Praise members are said to be accountable to a same-sex adviser, called a ‘head,’” Slate for perhaps the first time in its history used the hyphenated term “same-sex” in a derogatory manner.

The point of the article was not investigative journalism. It was to toss the word “cult” into the national conversation, hoping that it would get batted around enough to knock Barrett out of the competition.

11.) “The more Progressive Democrats attack her, the more likely [Barrett] is to be the nominee to replace Anthony Kennedy,” William A. Jacobson notes.

Writing at legalinsurrection.com, Jacobson quotes an article in the Washington Post suggesting that Barrett is “everything Trump’s base could want. But she also gives Trump something less tangible: The opportunity to stoke a culture war.”

Jacobson asks:  “Culture war? That would be liberal Democrats’ war against Barrett’s Catholicism.”

12.) A little-discussed but crucial component of Amy Coney Barrett’s fitness to serve on the highest court in the land is her education. Barrett received her law education not from one of the Ivy League schools, but from Indiana’s University of Notre Dame.

Princeton’s Professor Robert George drew attention to the significance of this in a humorous tweet: