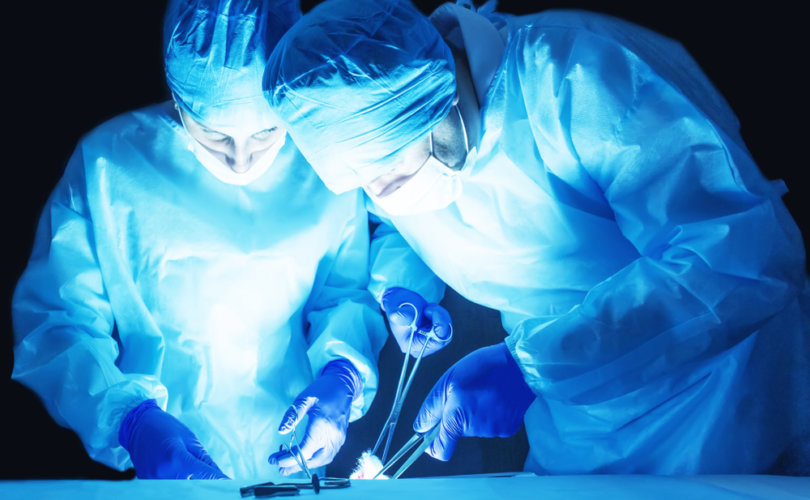 December 16, 2019 (LifeSiteNews) – The transgender train is screaming down the tracks, and today’s Jerry Springer headlines are likely to be tomorrow’s dystopian reality. The Telegraph, for example, is reporting that a 12-year-old boy in the U.K. has begun taking puberty blockers because his mother claims that the child knew from the age of three that he wanted to be a girl rather than a boy. Ash Lammin is embarking on this journey of gender transition with the support of his mom and a clinic run by the National Health Service, which is now also in the business of poisoning and amputating healthy body parts.

According to Terri Lammin, her son had insisted he was a girl from “the moment she could speak” at three-years-old, and Ash’s mum obediently changed her child’s name from “Ashton” to “Ashley” by deed poll at the age of eight. Ash will now embark on at least six years of puberty blockers, which will permanently change his body, before deciding whether to get “bottom surgery,” which includes the surgical removal of his male genitals and the creation of a facsimile vagina. Ash is one of over a thousand children in the UK getting “treated” with puberty blockers, and one of about 230 so far under the age of 14.

The media, of course, is treating this story has a wonderful bit of human interest news, as they now do with any transgender-related stories. The Daily Mail breathlessly announced that the UK’s “first trans parents” are delighted to announce the impending arrival of their child. The couple—a female-turned-male and male-turned-female—have used a surrogate to create their family, and the Mail’s description is a mind-bending mess of distorted propaganda and Brave New World ethics: “The couple's baby is being carried by a surrogate whom they do not wish to name, and is genetically linked to Jake by eggs he had harvested when he temporarily stopped taking testosterone for six months several years ago.”

The trans couple then found a woman who was willing to rent them her womb—one who was particularly pleased to help a couple “overcome prejudices.” The commodification of both the women and the children inherent to the surrogacy process, of course, was breezily excused based on the fact that being transgender justifies virtually everything. “We had a very upsetting message from an old schoolfriend I hadn’t seen in 20 years who said she felt surrogacy was ‘utterly wrong,’” Jake told the Mail. “Yet she was speaking as a mum fortunate enough to have three children, and we felt it wasn’t her business to comment.” So there you have it, then.

Over in the Scientific American this month, you’ll find a fascinating article titled “Taking Sex Differences in Personality Seriously,” which explains how “New approaches are shedding light on the magnitude of sex differences in personality and the results are so strong and pervasive that they can no longer be ignored.” The first several paragraphs are dedicated to recognizing the controversy around gender, as the LGBTQ movement has now labeled any science that inconveniences their ideological agenda as hate speech. The forces of science have now been marshaled into service to assist men and women with gender dysphoria in having children at all costs, but revelations about inherent gender differences are cast aside.

And in case you’re wondering, this is just the start. Transgender parents renting wombs to gestate children created for them in petri dishes might sound dystopian, but trans activists are hoping that someday soon, science and technology can bend and subvert the very laws of nature. Ash Lammin, the little boy taking puberty blockers with the help of his mother and the NHS, has said that when he grows up, he “eventually wants a womb transplant so that she can be a mother when she’s older.” And where did he get this idea from? Trans activists who say that as soon as it is possible, the government is obligated to provide free wombs to biological men who are attempting to transition to female.

That’s how far we’ve come. We’re unharnessed from reality, and floating downstream fast. I wonder how long it will be before we hit the rapids.

Jonathon’s new podcast, The Van Maren Show, is dedicated to telling the stories of the pro-life and pro-family movement. In his latest episode, he speaks with the editor of the National Review Rich Lowry about his latest book, The Case for Nationalism: How It Made Us Powerful, United, and Free. Lowry has authored other books, including New York Times bestseller, Lincoln Unbound and Legacy: Paying the Price for the Clinton Years. Van Maren and Lowry speak about Lowry’s book, where America is headed, “the age of Trump”, the rise of division in our political climate, and the need for maintaining culture in order to maintain a democracy.