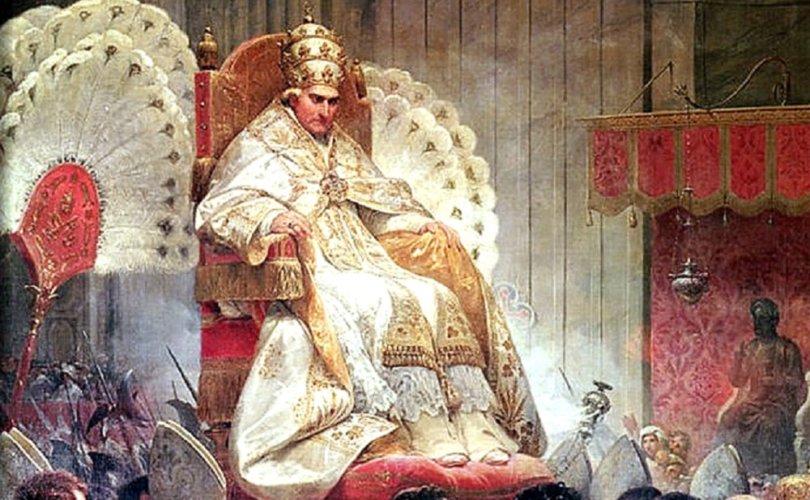 June 27, 2019 (LifeSiteNews) — The June 10, 2019, release of the “Declaration of the truths relating to some of the most common errors in the life of the Church of our time” signed by Cardinal Burke, Bishop Schneider, and several other bishops — a veritable “New Syllabus of Errors,” or perhaps “Syllabus of New Errors” — put me in mind of the great papal magisterial documents of centuries past, when reigning pontiffs knew the difference between truth and falsehood, knew how to exalt the former and condemn the latter, and possessed sufficient courage and charity to spread these judgments far and wide among the clergy and faithful. I found myself digging back into my files of papal encyclicals, and was, as usual, impressed by my rediscoveries. Today I will share two of them.

How many have heard of Pope Pius VIII (Francesco Saverio Maria Felice Castiglioni, 1761–1830)? His reign was short, less than two years, but his encyclical letter Traditi Humilitati, published almost exactly 190 years ago, resounds with penetrating insight and fervor. Here he might as well be speaking about Abu Dhabi and the working document of the Amazon Synod:

Among these heresies belongs that foul contrivance of the sophists of this age who do not admit any difference among the different professions of faith and who think that the portal of eternal salvation opens for all from any religion. … Against these experienced sophists the people must be taught that the profession of the Catholic faith is uniquely true.

He urges the bishops of the world:

Be very careful in choosing the seminarians, since the salvation of the people principally depends on good pastors. Nothing contributes more to the ruin of souls than impious, weak, or uninformed clerics.

As if anticipating trouble, Pius VIII cuts through the darkness unleashed by Amoris Laetitia:

We also want you to imbue your flock with reverence for the sanctity of marriage so that they may never do anything to detract from the dignity of this sacrament. They should do nothing that might be unbecoming to this spotless union nor anything that might cause doubt about the perpetuity of the bond of matrimony. … [T]he union of marriage signifies the perpetual and sublime union of Christ with His Church; as a result, the close union of husband and wife is a sacrament, that is, a sacred sign of the immortal love of Christ for His spouse.

In words reminiscent of St. Catherine of Siena, the pope urges his brother bishops to prove their zeal when the flock is in danger due to modern errors and revolutions:

Shall We hold back Our voice when the Christian cause is in such great need? Shall We be restrained by human arguments? Shall We suffer in silence the rending of the seamless robe of Christ the Savior, which even the soldiers who crucified Him did not dare to rend? Let it never happen that We be found lacking in zealous pastoral care for Our flock, beset as it is by serious dangers. We know you will do even more than We ask, and that you will cherish, augment, and defend the faith by means of teachings, counsel, work, and zeal.

A still earlier pope, Clement XIII (Carlo della Torre di Rezzonico, 1693–1769), dilated on the duties of bishops in his encyclical Christianae Reipublicae of 1766. Having railed against licentious books as well as the empty philosophy of Enlightenment thinkers, Clement reminds the bishops that their function is to defend the foundations of the Church, watch over the depositum fidei, and expose the wolves who are ravaging the fields:

It is principally your duty to stand as a wall so that no foundation can be laid other than the one that is already laid. Watch over the most holy deposit of faith to whose protection you committed yourselves on oath at your solemn consecration. Reveal to the faithful the wolves which are demolishing the Lord’s vineyard. They should be warned not to allow themselves to be ensnared by the splendid writing of certain authors, that they may halt the diffusion of error by cunning and wicked men. In a word, they should detest books which contain elements shocking to the reader; which are contrary to faith, religion, and good morals; and which lack an atmosphere of Christian virtue. We manifest to you Our great happiness in this matter that most of you, following the apostolic customs and energetically defending the laws of the Church, have shown yourselves zealous and watchful in order to avert this pestilence and have not allowed the simple people to sleep soundly with serpents.

In short, Clement XIII is condemning the sort of authors praised by Pope Francis, such as Walter Kasper, Fritz Lobinger, Teilhard de Chardin, Francesca Pardi, and Stephen Walford. In keeping with his name, Pope Clement, truly the merciful one, is warning us, as all good pastors have done, never to exchange novelties for established doctrine, temporary experiments for time-tested spirituality, dubious lifestyles for sound Christian morals.

We sorely need a Clement XV, a Pius XIII, a Gregory XVII, or a Leo XIV, emerging from a future conclave, to issue that long-overdue Syllabus of New Errors, to establish an Oath against Neo-Modernism, and to restore the liturgical tradition of the Roman Church. The healing of our tragic situation will require nothing less than several such popes, as did the reforms after the Council of Trent. Deus, in adjutorium nostrum intende: Domine, ad adjuvandum nos festina.