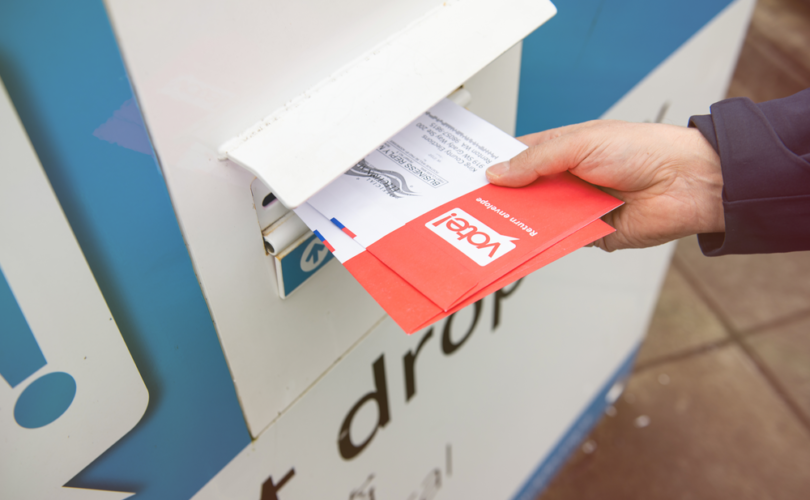 (LifeSiteNews) — I have known about the efforts of Catherine Englebrecht and True the Vote to investigate the 2020 election for at least a year.  And I — along with the readers of LifeSiteNews,  have known for many months that the great conservative filmmaker, Dinesh D’Souza, was making a documentary about their efforts.

But seeing the actual film was still a revelation — and not a pleasant one — for someone like myself who still cherishes the dream of America’s Founders of a free republic of self-governing citizens. For the work of True the Vote, as laid out by Dinesh, makes disturbingly clear that the 2020 election was stolen by Democrat operatives.

”2000 Mules” was released a few days ago in 200-plus theaters across America and quickly racked up over a million views. It is also available online, which is where my wife and I watched it in shocked silence from the comfort of our living room. You should too.

When you do, you will learn how True the Vote plotted out on maps exactly where the mail-in ballot drop boxes were in cities like Atlanta, Detroit, and Philadelphia, where massive voter fraud has long been suspected. They then put what they called a “geo-fence” around each drop box.

At the same time, they obtained terabytes of cell phone geo-tracking data in key swing states for the weeks before and up to the 2020 election. Running the geo-tracking data against the geo-fence coordinates, they then were able to see exactly which cell phones approached which drop boxes, and how many times they did so.

Those people who only visited the drop boxes a few times, maybe dropping off a ballot for themselves, grandpa and grandma were eliminated. What was left were thousands and thousands of cell phone carriers who visited drop box after drop box, night after night, sometimes for days or weeks on end during the early voting period.

But the icing on the ballot trafficking cake came when True the Vote was able to get 4 million hours of video footage in some of these same states. They were then able to identify the cell phone carriers — True the Vote calls them “mules” — and observe their behavior. What they show — and what you see with agonizing clarity in the documentary — are ballot trafficking “mules” approaching a drop box, usually in the week hours of the morning, taking a handful of ballots out of a bag or backpack, and stuffing them in the ballot box. Over and over and over again.

The video also reveals that the mules will often take pictures of the ballots before they stuff them in because, as the documentary reveals, they are being paid by the ballot and need proof that they delivered the goods. Sometimes they are seen wearing latex gloves in an obvious effort to avoid leaving incriminating fingerprints.

Aside from visiting dozens of ballot drop boxes, the mules also made regular visits to Democrat-run non-profits in these same states to pick up ballots and receive payment for stuffing them into the drop boxes. In fact, as Catherine Engelbrecht makes clear in the movie, to be considered a “mule” had to have not only visited a multitude of drop boxes, but also had to make five or more visits to these stash houses.

You will leave the documentary convinced that this was a planned and coordinated conspiracy to add tens or hundreds of thousands of illegal ballots in every single battleground state. All together, True the Vote estimates that perhaps 7 percent of the mail-in ballots were trafficked. And that, even using the most conservative estimates for how many mules stuffed how many ballots, it is clear that the 2020 election was stolen.

So where do we go from here?

The first thing to do is watch the documentary for yourself. If you have already done so, then encourage your friends and family to watch it as well  Whatever their political views, they will be shaken seeing the brazenness as well as the sheer magnitude of the fraud that has been perpetrated on the American people.

It is all the more important that you do this because of the current media blackout. It is not surprising that the Democrat Party’s minions in the mainstream media would prefer that you not view the documentary. No major news agency has carried news of 2000 Mules.  After all, their political allies have been caught with their hands in the ballot box.  There is simply no way to explain away the cell phone and video evidence of their illegal acts. And so they don’t even try.

But the conservative media has been largely silent as well. Aside from Tucker Carlson’s interview  with Catherine Englebrecht last week, Fox News has been silent on the 2020 election heist, and the documentary itself has gone unmentioned.

And from the Republican Party’s social media accounts — crickets. Its leaders in Congress, themselves safely re-elected, are afraid to confront those who have systematically defrauded the American people of their true president.

As far as state and federal law enforcement agencies, they have taken no action to address the election heist either. True the Vote provided their data to the Georgie Bureau of Investigation last year, and nothing has been done. Perhaps not surprisingly, the FBI has not been on the case either.

It is impossible to exaggerate how precise the geolocation data for smart phones has become. As True the Vote’s Jack Phillips points out in the documentary, “The fact of the matter is, these techniques are used every single day by law enforcement, intelligence community [and] Department of Defense.” Not to mention that they were being used in the days up to January 6, 2021, to track the movements of hundreds, if not thousands, of those who attended the Trump rally that day, and later protested at the Capitol.

In other words, it would not be difficult for the FBI, or Homeland Security, to identify and interview each and every one of the mules pinpointed by True the Votes efforts. But, as far as we know, they have not even begun to do so.

So it is up to ordinary American citizens — you and I.

The documentary has been doing phenomenally well, but 2000 Mules must do even better, so spread the word.

Americans must raise such a cry that the Republican Party will find its voice, and law enforcement agencies will be forced to investigate.

If there are no consequences for the electoral fraud that Democrat operatives have perpetrated on the American people, they will do it again. And they will be even more brazen.