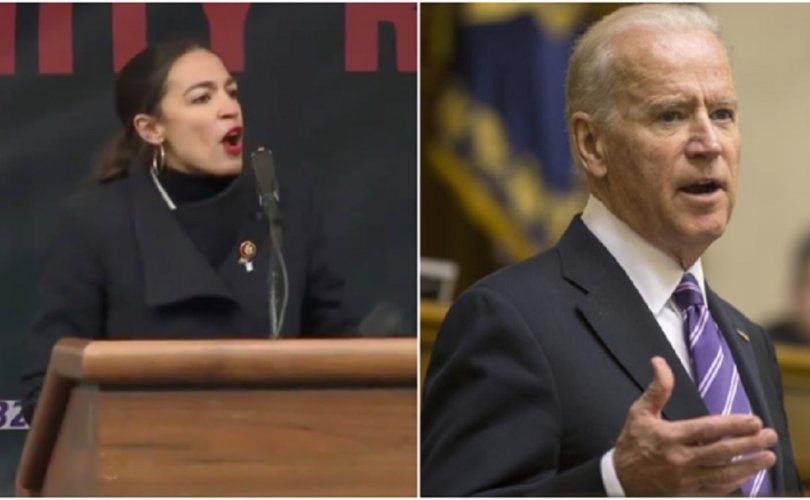 Heck, the way the last three years have progressed, this isn’t even your older brother’s Democratic Party.

The leftward lurch, nay, leap of the onetime home of Bill Clinton’s centrist politics into the deep waters of socialism during the Trump era has changed seemingly forever the party historically associated with blue-collar, middle-of-the-road Americans.

Gone are the days of talking about “safe, legal, and rare” abortions. Now supporting anything other than infanticide makes you a traitor to the cause.

Gone too are when Democratic senators like Dianne Feinstein of “the dogma lives loudly in you” fame warned against the dangers of unchecked immigration. Watch her do so in this video taken from the early ’90s.

Here’s a short list of some of the other radical policies Democrats are currently kicking around: decriminalizing prostitution; getting rid of the Electoral College; expanding the Supreme Court; universal daycare; “free” college tuition; abolishing ICE; legalizing marijuana; reparations for slavery; and, of course, the Green New Deal.

Question: Will any of this help them win Michigan; Pennsylvania; or Wisconsin, where a socially conservative judge just beat out a feminist, Planned Parenthood-backed candidate for a seat on the state’s Supreme Court?

The growing extremism on display in today’s Democratic Party means their 2020 presidential primary will serve as an inflection point that may irreversibly change the party and potentially the country as a whole.

On the one hand, you have the younger, communist-loving, LGBT social justice warriors sympathetic to Antifa and supportive of Black Lives Matter who draw inspiration from Bernie Sanders and the aforementioned 29-year-old Ocasio-Cortez.

On the other side of the Democrat Party exists the establishment, limousine liberals in the mold of Nancy Pelosi, who just turned 79.

The fissure between the two camps is widening with each passing day. All indications are that the party’s future leaders do not want to go back to its moderate past. Hence, the knives are out for former V.P. Joe Biden, who represents everything the base of the party wants to move beyond: middle-class white male America.

Despite polls suggesting that Biden is the likeliest candidate to beat Trump in 2020, other Democrats in the race desperately want to take out his knees before he gets any momentum. The recent media coverage of Biden’s creepy touching of women is no doubt part of that effort.

True to form, the establishment was quick to counter the smear attempt.

MSNBC host Mika Brzezinski, daughter of the late globalist Zbigniew Brzezinski, an adviser to Jimmy Carter and co-founder of the Trilateral Commission, came to Biden’s rescue on her show with Joe Scarborough the other week, saying of him: “he is extremely affectionate, extremely flirtatious in a completely safe way.”

How is this excuse anything other than a double standard for Biden and a complete betrayal of the #MeToo movement?

The message being sent here is clear. The elites aren't going to let their candidate (who seems to also like touching children) be taken down so easily.

Biden has quickly learned that the road to 1600 Pennsylvania Avenue is going to include a lot of apologizing — not only for his weird back rubs and countless “gaffes,” but for referring to Mike Pence as a “decent guy,” for his role in the Anita Hill hearings, and for his votes on criminal justice reform.

Biden has also denounced, at least indirectly, his “privilege,” a prerequisite for any white male Democrat running for office these days.

In New York last month, Biden said to an audience, “We all have an obligation to do nothing less than change the culture in this country[.] … This is English jurisprudential culture, a white man’s culture. It’s got to change.”

Wall Street Journal columnist Peggy Noonan wrote in an essay last Thursday that Biden should in fact not run. The party will tear him apart, she argues. His legacy is already set as a lion of liberalism in the U.S. Senate and as a loyal aid to the nation’s first black president. If he announces his candidacy, things will get ugly. Fast.

I tend to agree with how Noonan sees things shaking out tactically against Biden. He doesn’t need to run. In fact, he's looked old and tired when giving speeches lately — much older than he did in 2016. But it seems he thinks he has a patriotic duty to give it a go. That or he’s being pressured by international corporate elites who want a candidate who will bring to an end Trump’s anti-globalist message.

Either way, if Biden doesn’t run, unlikely as that would be, what would his absence mean for the upcoming general election?

Pat Buchanan recently said that if Biden isn’t the Democratic nominee in 2020, “Trump would be the nation’s last line of defense against the coming of a Socialist America.”

Maybe. I happen to think that even if Biden were the Democratic nominee, he’d ask someone like Kamala Harris to be his vice president in order to appease the far left in the party. It’s hard to imagine that some socialist policies wouldn’t be put into place in such an administration.

Whoever the Democratic nominee is, pro-life, pro-family Americans need to be aware that 2020, even more than 2016, may be the last chance to save the country from sliding into liberal totalitarianism.