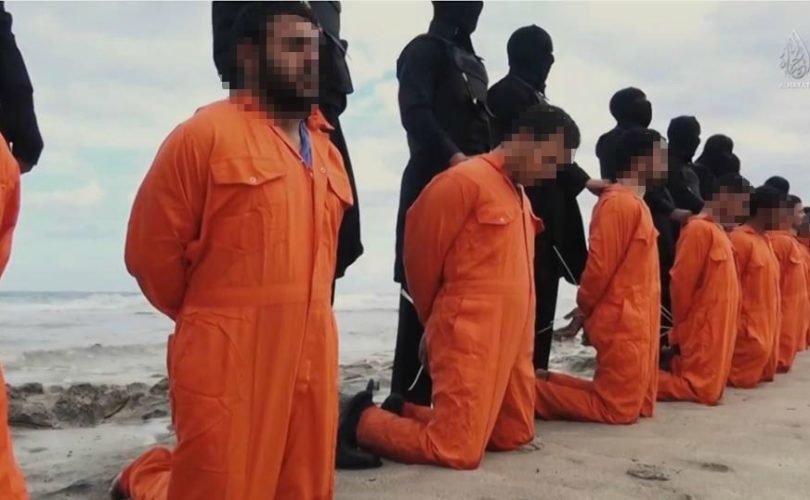 Lent is here and like usual I am scrambling to figure out what I should give up. Many Christians are deciding whether to give up sweets or swearing or something else. All for what? To humble ourselves in some small way to unite our sufferings to those of Christ on the cross?

Sugar? Swearing? Is that all we got? Our modern day sacrifices don’t seem enough when we compare them to the incredible sacrifices happening around the globe.

Just a little over a week ago the world watched as ISIS fighters beheaded Christian victims whose hands were cuffed behind their backs. Egyptian officials said they believed that 21 Christians were killed that day. It is also said that a few of the hostages cried out “Oh God” and “Oh Jesus” before their untimely deaths.

Pope Francis commented about the horrific event: “The blood of our Christian brothers is a witness that cries out.” He went on to say to his audience, “If they are Catholic, Orthodox, Copts, Lutherans, it is not important: They are Christians. The blood is the same: It is the blood which confesses Christ.”

In February 2015, nearly 2000 years after Christ’s death and Resurrection, 21 martyrs lost their lives in the name of a God they were not willing to forsake.

I go about my daily life in America where I practice my Catholic faith freely and wonder if giving up sugar will just be too much of a sacrifice for Lent, wondering if I can endure it for 40 days. I realized my own weakness as I watched 21 men give their lives in the ultimate sacrifice.

It just puts things into perspective. My friend and speaker Patrick Madrid wrote on his Facebook page last week after this ISIS attack on Christians, “I am thinking of these brothers in Christ as I prepare for my own paltry, insignificant Lenten ‘sacrifices.’ Praised be ‎Jesus‬ Christ, now and forever. Onward Christian Soldiers!”

That about sums up how I feel about my own Lenten sacrifices, which seem more like inconveniences than real sacrifices.

This tragic loss of lives should be a reminder to all of us what Lent is truly about and what it leads to. It’s not about giving up the sugar or the swearing, but the greater commitment through fasting, giving alms, and prayer to re-unite ourselves to Christ. To give up those things that distract and deter us from giving ourselves fully over to Him. It is a time to focus and reflect on the life and death of Christ for 40 days in preparation for the Easter celebration that reminds us that Christ was exactly who he revealed himself to be—the son of God, the one who triumphs over sin and death, and the lover of our souls.

The United States Catholic Conference of Bishops states, “The key to fruitful observance of these practices is to recognize their link to baptismal renewal. We are called not just to abstain from sin during Lent, but to true conversion of our hearts and minds as followers of Christ. We recall those waters in which we were baptized into Christ's death, died to sin and evil, and began new life in Christ.”

As I receive the sign of the cross in dark, dusty ashes on Ash Wednesday, this year will be different. This year I will try harder to sacrifice in a way that brings me closer to Christ. The dark dust of those ashes will be not only be a reminder for me of Christ’s death but of the many who have lost their lives for a religion that I sometimes take for granted.

May this Lent be a time where true fasting, almsgiving, and prayer will not be done in some measly attempt to fulfill a requirement, but rather be done to unite ourselves to Christ’s suffering and turn away from sin and be faithful to the Gospel, the same Gospel 21 men just died for.