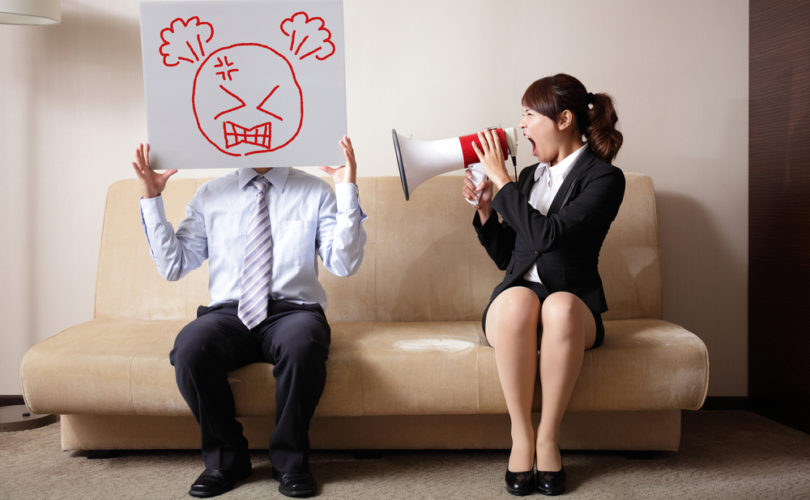 There is intense social pressure to avoid even bringing up any controversial moral issues, and doing so can result in ire, accusations, and marginalization.Shutterstock

The year of our Lord 2014 finds us in a much different era than even a few short decades ago. The belief that a corrupt and decadent cabal of academics, politicians, and celebrities are trumpeting trends that the average hard-working, moral citizen – the “moral majority” – despises, has long since crumbled.

Presidential candidate George McGovern was widely mocked in 1972 as running on a platform of “acid, amnesty, and abortion.” The Obama Democrats in 2012 called that a winning strategy.

The Sexual Revolution has made a clean sweep. Any pretence North Americans might have of living in “godly” nations look almost humorously naive. As the moral majority fades to a distinctly despised minority, how can Christians articulate their now-despised views on anything from marriage to abortion to the hook-up culture? There is intense social pressure to avoid even bringing up any of these topics, and doing so can result in ire, accusations, and marginalization.

The biblical book of Proverbs informs us, “A soft answer turneth away wrath.” Better advice in our current culture wars could not possibly be given.

I remember one awkward moment back in university, when I attended a Fraser Institute dinner featuring George W. Bush’s right-hand man, Karl Rove. After he finished his analysis of the 2008 election campaigns, Rove took questions from the audience. One wealthy attendee, probably assuming that it was a safe joke, made some comment about a certain Democrat—I can’t recall which—having a string of wives. Rove’s short, terse response killed every snicker in the room: “I’ve been divorced.”

I sympathized with the hapless businessman. I began my own university career hopelessly unequipped to deal with any discussions articulating my Christian beliefs. I realized very quickly that the principles I had taken for granted, coming as I did from a loving home with parents married for life and with my views untainted by the sexual nihilism promoted by the television shows they did not permit in the house, were not at all the consensus.

Anyone who has taken a pro-life training course will not be surprised to hear that the Socratic Method is always the best. When I was confronted by university friends and peers on some of my perspectives that they found downright incredible, questions were always helpful. One friend demanded to know why I wasn’t sleeping around. I responded with a question: “How many of the people that you were with do you wish you hadn’t hooked up with?” After a pause, the thoughtful response: “Most of them, I guess. Maybe even all of them.”

Another classmate demanded to know how I could call myself “a dude” if I wasn’t “sleeping with chicks.” I simply asked him whether it took more of a man to keep one woman happy for a lifetime or dozens for ten minutes. To that one, I got an arched eyebrow, an appreciative chuckle, and no follow-up questioning. In none of these cases and many others did I end up in a verbal brawl over sexual ethics. Instead, they thought about their own views, and gained a bit of respect for mine.

I know it seems trite and perhaps a bit precious, but it’s absolutely true. I remember watching a documentary on the battle over Proposition 8 in California, where gay marriage proponents and opponents screamed at each other in the streets, unstoppable force meeting immovable object. It brings to mind a few lines from Matthew Arnold’s poem “Dover Beach,” in which he explains that the world:

Hath really neither joy, nor love, nor light,
Nor certitude, nor peace, nor help for pain;
And we are here as on a darkling plain
Swept with confused alarms of struggle and flight,
Where ignorant armies clash by night.

However, when you discuss things with people instead of placards, it’s amazing how the relationships that form can help others question some of their perspectives.

We see this all the time debating abortion—once people realize that you’re not going to yell at them, that you just want to chat, and that you’re not judgemental monsters who are there to condemn them, they calm down. One pro-choice protestor screamed at me for ten minutes. Eventually, however, we had a three hour conversation that resulted in her tearing up her own sign. Once I was no longer a protestor but a person, she had to take me more seriously. She just had to realize that pro-lifers were people before she could grasp that pre-born children, are, too.

Another time I was chatting with one of my friends, who happens to be gay, with whom I have extensively debated cultural issues. He started to talk about how support for traditional marriage is bigoted. But I interrupted him with a question: “Would you call me homophobic?”

He barely paused. “I’d call you a friend,” he said, and carried on with the conversation.

Trust me, I know this one is difficult sometimes. At university, I failed this one multiple times. But if you choose to engage—and you should—on cultural issues like abortion or pornography or sexual ethics in general, where people’s views are often rooted in their own experiences and those of people that they love, staying calm is essential. As defensive as you might be when your principles are under attack, always remember that the people you are discussing or arguing with are probably just as defensive as you are.

The biblical book of Proverbs informs us, “A soft answer turneth away wrath.” Better advice in our current culture wars could not possibly be given. That doesn’t mean we compromise on truth, and it doesn’t mean that there isn’t a time for “righteous indignation” in defence of our beliefs. But in the context of a one-on-one conversation with a university peer, many of whom will try to bait you, this advice is essential. I was involved in all sorts of campus rabble-rousing at university, and while I, being the loudmouth that I am, thoroughly enjoyed vociferous encounters, one of the lessons I learned and have learned time and time again since is that we often need less heat and more light. Keep your cool, and you might be surprised at how productive your conversations will turn out.

In summation, I always think of my discussions with university peers in the terms of one of Aesop’s Fables. The Wind and the Sun were debating as to which was the strongest, and decided to have a contest to resolve the issue. They decided to see which one of them could cause a man walking down the road to take off his cloak. The Wind howled and blew and whipped around the man, who only clung to his cloak all the harder and pulled it around him, until the Wind finally gave up in despair. The Sun simply shone brighter and warmer until the man relinquished his cloak and took it off. We have a chance on campuses to have real, meaningful discussions with our peers on the issues that matter the most. And we should.