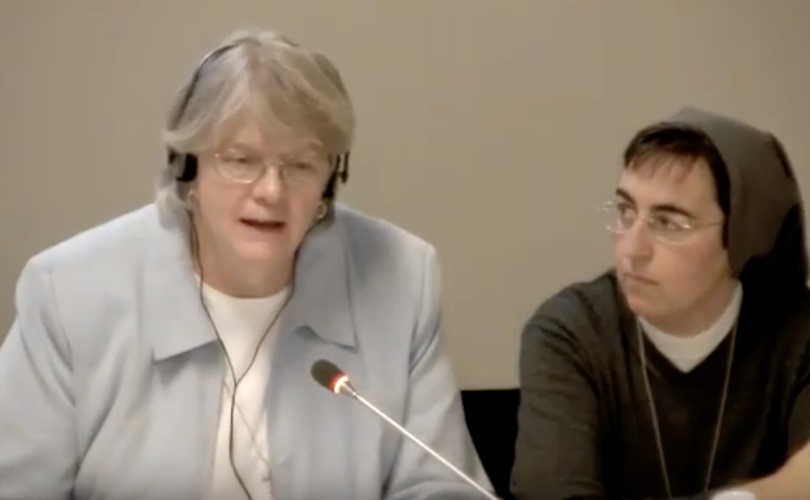 October 30, 2018 (LifeSiteNews) – The general superiors of 34 female orders from Austria, Germany, Switzerland, and Luxembourg are demanding more influence in the Church. As part of an international umbrella organization, they ask that women be admitted to all offices in the Church, including ordained offices. Already in 2016, some superiors general of the umbrella organization asked Pope Francis about a commission on female deacons. The final document of the Youth Synod seems to resonate with some of the requests of the women religious.

As several German-speaking outlets reported on October 25, the German-speaking members of the International Union Superiors General (UISG) had a meeting in Innsbruck, Austria, at which they also requested that women have voting rights at future synods of bishops.

“In the future, more women are to be included at synods of bishops – of course with voting rights. That is the only way they can influence decisions,” they explain.

The general superiors of the German-speaking orders met from October 18 to 22 in Innsbruck, according to a report on the website of the Austrian religious orders. The local bishop, Hermann Glettler, visited the general superiors during their meeting and spent some time with them. Inge Metzmacher, pastoral counselor of the Archdiocese of Cologne, Germany, moderated the discussions.

According to this report, these religious leaders see a need for a new “culture of dialogue, of participation, and of gender equality” in the Church. The Church's teaching should be adjusted to “new scientific findings in the theological and other academic disciplines.” The general superiors are of the opinion that an increase of qualified women in the Church would bring “diversity and an enrichment on all levels.” One could learn from religious communities “how men and women have fruitfully worked – and still work – together for the people.”

Already on October 16, Sally Hodgdon – the Vice President of the UISG participating at the Youth Synod in Rome – had raised the issue of women in the Church and their access to ecclesiastical positions. Hodgdon declared that there will be in the future voting rights for women at synods of bishops.

As the report on the website of the Austrian religious orders states, the German-speaking members of the UISG, by a majority number, support a German declaration from December 2017. This declaration was formulated at a theological conference in Osnabrück and contains a call for the admission of women to all offices and services of the Church, including the offices of the ordained ministry (deacon, priest, bishop). According to this declaration, as supported by the 120 participants, true ecumenism cannot advance “without an agreement concerning the presence of women in all ecclesiastical offices.”

As the report on the German-speaking general superiors’ meeting points out, it had been upon the initiative of the UISG that Pope Francis himself, in May of 2016, then established a commission to study the history of the female diaconate.

During a May 12, 2016 meeting between Pope Francis and the UISG, the following comments and questions were, according to Zenit’s translation of the Vatican’s transcript, put before him by one religious sister: “There is in the Church the office of the Permanent Deacon, but it is only open to men, whether married or not. What impedes the Church from including women among the Permanent Deacons, precisely as happened in the early Church? Why not constitute an official commission that can study the question?”

The Pope answered, “I think it will do the Church good to clarify this point: I agree and I will speak about doing something of this nature.” He added, “I think I will ask the Congregation for the Doctrine of the Faith (CDF) to refer studies to me on this topic.” He concluded his reflections with the words: “Therefore, on the diaconate, yes, I accept and it seems useful to me that a commission should clarify this well, especially in regard to the early times of the Church.”

As Sister Sally Hodgdon likewise explained on October 16, this commission has already written such a report. However, she does not yet know whether this is its final report. Observers wonder why nothing has been heard for quite some time about this commission. One of its members, Professor Karl-Heinz Menke, wrote in June 2018, however, a commentary for the German Catholic newspaper Die Tagespost. He argued that female deacons would now be possible if it had not been for the recent magisterial teachings of Pope Pius XII and of the Second Vatican Council. Since then, the diaconate has been declared to be part of the three-fold office of ordination which is only open to men, and therefore women are to be excluded from it.

According to Sister Hodgdon, the Youth Synod touched upon the matter of female deacons three or four times during the plenary discussions. She was an auditor at the synod, but without voting rights. A novelty at this synod was the fact that two non-ordained religious brothers were actively participating and had voting rights. This brought up the question as to why religious sisters were excluded from those very rights.

As LifeSiteNews reported on October 27, the final document of the Youth Synod contains some controversial passages highlighting the importance of female influence in the Church. Paragraph 148 speaks about “the presence of women in ecclesial bodies at all levels, even in positions of responsibility, and the participation of women in ecclesial decision-making processes, respecting the role of the ordained ministry.” These expressions seem to resonate with some of the statements and requests already made by the International Union Superior Generals over the last weeks and years.