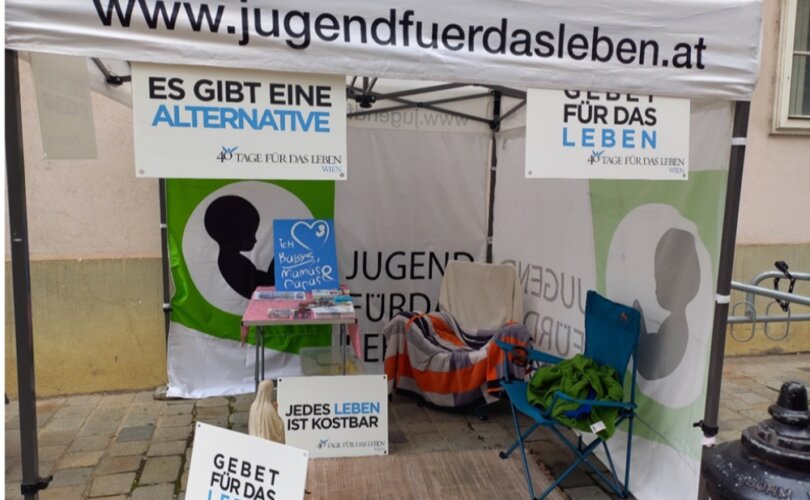 VIENNA (LifeSiteNews) — During this year’s fall campaign, people are again praying 24/7 for 40 Days for Life in many places around to world to end abortion and save the lives of unborn children.

The campaign is not limited to North America. In many European countries people pray unceasingly for 40 days between September 28 and November 6 as well. I spent time in prayer in front of a centrally located abortion clinic in my hometown of Vienna, Austria.

To sit in a chair in a small tent covered with signs that say “Prayer for life” and “Every life is valuable” and to publicly pray for the unborn can sometimes be uncomfortable. Getting weird looks, hearing hostile comments, and sometimes suffering insults hurled at you in a public place is not a particularly pleasant experience.

Like LifeSiteNews Editor-in-Chief John-Henry Westen said, “To end abortion, we must have the courage to step up and do what is uncomfortable.”

If we are not willing to fight for the life of the unborn because we may face uncomfortable and even hostile opposition, we have to rethink our priorities. According to the World Health Organization, around 73 million abortions take place worldwide each year and about 3 out of 10 pregnancies end in abortion. That’s over 70 million unborn babies killed every year. These numbers are absolutely horrific, mind-boggling, and demand a proper response.

We must pray publicly to shine a light on this hidden genocide of the unborn that is taking place in our time.

However, we need not condemn mothers who decided to have an abortion or even the doctors who carry out this evil act. Christ did not condemn the adulterous woman; instead he told her “Go, and now sin no more” (John 8,11).

God can forgive every sin if we truly repent, and there are many wonderful examples, most famously the story of Abby Johnson. Even though she ran a Planned Parenthood abortion clinic and had two abortions herself, she realized that abortion was murder when she assisted an ultrasound-guided abortion and watched in horror how a 13-weeks-gestation baby fought for its life and was killed by the abortionist.

Johnson converted to the Catholic faith and now has eight children together with her husband and is a passionate pro-life activist and leader. Stories like Abby Johnson’s show that anyone can repent, turn his or her life around, and find forgiveness in Christ.

For me personally, the 40 Days for Life is a silent sign of charity. There is continuous prayer for the unborn children, their mothers and families in need in front of the abortion clinic. We also pray for the conversion of the clinic staff. Together we send a public signal that we care about the atrocities that happen behind the walls of an abortion clinic. At the same time, we can trust that by God’s grace, miracles happen in secret every day. According to Abby Johnson, there are up to 75 percent fewer abortions when people pray outside the clinic, and who knows, maybe the Lord will give us one or more major conversions in Vienna as well.

A principal reason to keep praying publicly to end abortion is that many babies are saved by it. On October 10, the president of the 40 Days for Life apostolate Shawn Carney shared that 49 unborn children had been saved across the world as a direct result of 40 Days for Life prayer vigils and volunteers.

I had my own rewarding experience when I was praying in front of the abortion clinic in Vienna: a man walked up to me to tell me how great it is that we were praying there. “My mother considered aborting me, but she did not, and her faith helped her not to do it,” the man told me. “Thank you for doing this. Please keep going!”

Encounters like these make all the weird looks and hostility worthwhile.