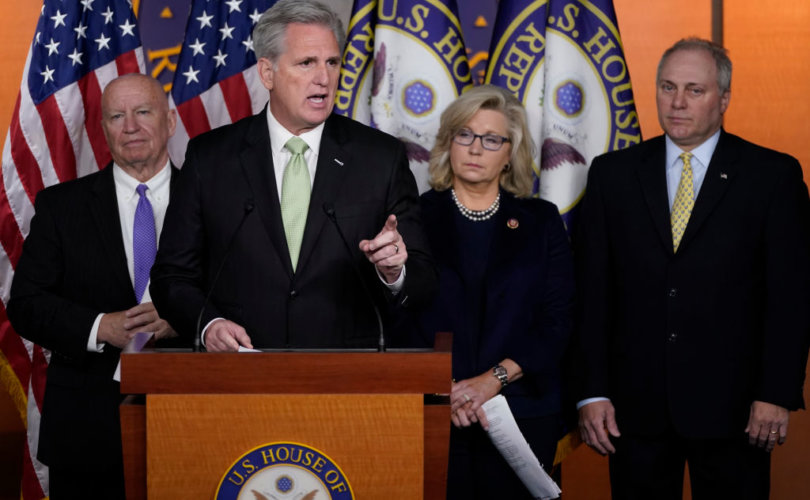 WASHINGTON, D.C. (LifeSiteNews) — Following a stunning dereliction of GOP leadership, 47 Republicans in the House of Representatives joined all Democrats on Tuesday in voting to pass a radical bill to make the redefinition of marriage virtually impossible to untangle.

Introduced as part of Democrats’ fear-mongering efforts over the U.S. Supreme Court, the so-called “Respect for Marriage Act” would repeal the longstanding (but unenforced) Defense of Marriage Act, which recognized marriage as a man-woman union in federal law and protected states’ rights to do the same; federally recognize any “marriage” lawfully performed by any state; and force every state to recognize any “marriage” of any other state “between two individuals” without regard for “the sex, race, ethnicity, or national origin of those individuals.”

Notably, those conditions on marriage recognition only apply to states, not to the federal government. In other words, the bill would force the federal government to recognize any definition of marriage a state might come up with in the future, sight unseen. So while the “two individuals” language gives those voting for it in 2022 something to point at to claim the bill isn’t that extreme, the fact remains that if and when a state decides to validate polygamy, the federal government will have to agree, setting up a new “inequality” for tomorrow’s leftists to knock down.

But instead of whipping votes against this naked blend of Democrat base-pandering and LGBT future-proofing of cultural transformation, House Republican leaders Kevin McCarthy and Steve Scalise gave their members permission to support it … and 47 of 211 House Republicans did just that, including Liz Cheney, Darrell Issa, Adam Kinzinger, Nancy Mace, and Elise Stefanik.

Now the bill moves to the Senate, where Majority Leader Chuck Schumer says Democrats are currently working to see whether they can get 10 Republican senators to cross over and pass it over the 60-vote filibuster threshold. And GOP Minority Leader Mitch McConnell, a walking, talking insult to the very concept of leadership, instead of drawing a line in the sand, meekly responds that he’s “going to delay announcing anything on that issue until we see what the majority leader wants to put on the floor.”

Can Democrats get 10 Republicans? So far, at least four have indicated they either definitely or likely will vote yes: Susan Collins, Lisa Murkowski, Thom Tillis, and Rob Portman. Politico identifies another six who are noncommittal but don’t rule out supporting the bill.

One of the national GOP’s dirty little not-so-secrets is that it’s only as conservative as it needs to be to stay in office. Their natural inclination is to go with the flow on marriage and sexuality, partly because it’s irrelevant to the economic issues they really care about or to their own professional betterment, and partly because it’s easier to live, work, and play in the Swamp when one reflects the Swamp’s values.

Scores of Republicans were privately thrilled that the Supreme Court disenfranchised America on the definition of marriage in 2015, hopeful that no longer being able to vote on the issue would exempt them from having to take a stand and put the issue behind them. For the most part it has, but the issue was never going to stay buried forever.

There is a direct causal line from surrendering marriage to the following years’ assaults on religious liberty and today’s all-out war on gender distinctions. “Sex doesn’t matter to marriage” was the starting point on the path to “sex doesn’t matter to anything,” and cutting children’s best interests out of society’s understanding of marriage was a predictable precursor to pursuing adult gratification at the expense of child welfare in even more destructive ways.

Aside from all the principle and policy reasons to be appalled by Republicans’ passivity here, those who cross the aisle to vote for the RFMA are playing with political fire. In an election year where Joe Biden and his allies’ disastrous leadership has set them up for a midterm massacre, Democrats have effortlessly baited Republicans into reminding their most loyal voters that their party couldn’t care less about their values and concerns. It would be sheer political malpractice for the GOP to simply assume that won’t have any impact on turnout in November.

This is a disaster in the making. Now is the time for conservatives, Christians, and other pro-family Americans to contact their senators and put them on notice: either stop this latest assault on marriage in its tracks or expect to be replaced by new lawmakers who will.