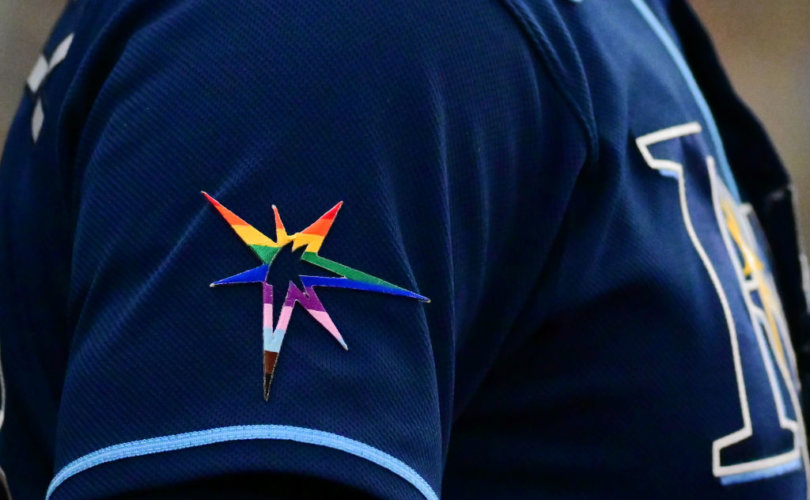 The five pitchers — Jason Adam, Jalen Beeks, Brooks Raley, Jeffrey Springs, and Ryan Thompson — took a stand against the pressure being exerted within all major league sports to “celebrate” and “welcome” sodomy and gender confusion during the month of June.

Today, we wear our #Pride on our sleeves pic.twitter.com/bcOLJNhx6Y

Rays management went so far as to post the team’s starting lineup in the colors of the gay rainbow flag and the pastel-hued trans flag just before the start of Saturday’s game.

We line up with a little extra #Pride tonight pic.twitter.com/mjGZqTPEIX

Adams said the reason for declining the homosexual- and trans-themed emblems came down to faith.

“So, it’s a hard decision. Because ultimately, we all said what we want is them to know that all are welcome and loved here,” explained Adams to the Tampa Bay Times.

But when we put it on our bodies, I think a lot of guys decided that it’s just a lifestyle that maybe — not that they look down on anybody or think differently — it’s just that maybe we don’t want to encourage it if we believe in Jesus, who’s encouraged us to live a lifestyle that would abstain from that behavior, just like (Jesus) encourages me as a heterosexual male to abstain from sex outside of the confines of marriage. It’s no different.

It’s not judgmental. It’s not looking down. It’s just what we believe the lifestyle he’s encouraged us to live, for our good, not to withhold. But again, we love these men and women, we care about them, and we want them to feel safe and welcome here.

Over the last few years, Major League Baseball (MLB) and every other professional sports league have promoted “LGBTQIA+ Pride” nights and supported LGBTQ causes, including showcasing a “marriage” proposal between two homosexuals in front of a stadium packed with families.

And in 2020 during the height of violent and destructive Black Lives Matter rioting in major cities across the U.S., hundreds of professional ballplayers surrendered themselves to the abhorrent BLM ideology by taking a knee before the start of their games.

By bending their knees, the men have paid homage not to civil rights, but to Marxism; to the destruction of the nuclear family; to transgender and homosexual political power squashing not just religious liberty, but religion itself; to the defunding of police; and to the erasure of western history and culture.

— Article continues below Petition —
Tell the Secretary of Defense: "Pride Month" is making our country weaker
Show Petition Text
10095 have signed the petition.
Let's get to 12500!
Thank you for signing this petition!
Add your signature:
Show Petition Text

By choosing to peel off the rainbow burst logo from their jerseys and wear the standard team hat, the five pitchers have calmly and firmly taken a manly stand against the unbridled advancement of an ideology antithetical to Christianity.