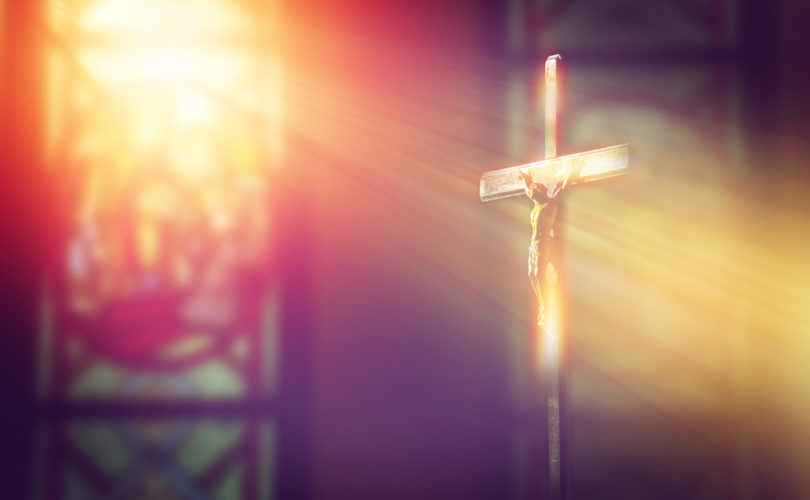 April 23, 2021 (LifeSiteNews) – As the month of June approaches, Catholic school boards in Ontario are facing increasing pressure to follow the world in declaring June as “Pride Month” and to fly the rainbow-striped homosexual “pride flag” atop school masts in the name of diversity, inclusivity, and acceptance. There are seven good reasons why the pride flag should never be flown atop any Catholic institution.

1. Flags are flown by those who hold control. The pride flag was created in 1978 by open homosexual and drag queen Gilbert Baker. The flag as a whole, composed of various colored stripes, has become an international symbol of the homosexual movement and its view of the human person and sexuality that is at odds with biology, the social sciences, the world’s major religions, and specifically with the Catholic faith. To fly the rainbow flag at Catholic schools would simply mean that the homosexual agenda has taken control of Catholic education and that Catholic children are no longer receiving an authentic Catholic education at such schools. The pride flag should not be flown at Catholic schools because the formation of Catholic children should not be ceded to homosexual activists. Catholic children require Catholic formation, not homosexual propaganda.

2. The term “pride” in salvation history denotes an explicit refusal to follow God and his rule. The Book of Proverbs warns that “Pride goes before destruction, a haughty spirit before a fall” (16:18). God’s laws are especially revealed in the Bible, which warns in numerous places against homosexual behaviors. Those who engage in such behaviors are ultimately rejecting God’s laws. Pride drives them to choose their own way over God’s ways. The pride flag is especially symbolic of supporting actions and behaviors that are specifically condemned in the Bible and contradict Catholic sexual morality. A flag that symbolizes a refusal to follow God and his rule should not be flown at Catholic schools. Catholic children should not be formed in the vice of pride, which is one of the seven deadly sins, but in the virtue of humility in imitation of Our Lady’s fiat, “let it be done unto me according to your word.”

3. The rainbow was originally a religious symbol of God’s covenant with man that God used to convey to Noah (Genesis 9:13-17) that he would never again destroy the world by a flood. LGBT activists co-opted the rainbow to create a flag where the different colors are often interpreted as signifying sexual “diversity.” While a naturally occurring rainbow has seven colors, the LGBT flag has only six, a number that is biblically associated with sin, imperfection, and even Satan. The loud blaring rainbow colors have become a political symbol for the acceptance of sexual lifestyles and behaviors that contain an implicit rejection of God’s plan for sexuality. A flag that warps the biblical meaning of the rainbow to mean a celebration of the rejection of God’s laws should never be flown over Catholic schools. Catholic children should instead rally under the primary sign of the Catholic faith, the cross of Jesus Christ, which is the greatest sign of God’s love for everyone.

4. The Catholic Church calls everyone, including children, to a life of chastity. The pride flag, however, is closely associated with those who promote lifestyles of sexual hedonism. To fly the pride flag at Catholic schools would send children the false message that there is no problem with them exploring lifestyles and behaviors that are contrary to the life of chastity. In order to not contradict the message that Catholic children are called to chastity, not immorality, pride flags should not be flown at Catholic schools.

5. Catholic schools exist to help parents teach their children the Catholic faith. There is no place in such schools for ambiguity concerning Catholic doctrine. They must present Catholic teaching in a clear and convincing manner. The pride flag, however, is inextricably linked to promoting an LGBT agenda that is at extreme odds with the faith. To fly the pride flag at Catholic schools would mean to betray the responsibility that Catholic parents placed in the schools when the parents sent their children to these schools. Catholic schools must not betray the trust that parents place in them. They must form students with the truths of the authentic Catholic faith.

6. Catholic schools teach children about God and his laws. God teaches through Scripture and the Church that homosexual lifestyles and behaviors are not part of his plan for mankind. Flying the pride flag, which supports homosexual lifestyles and behaviors, would amount to a betrayal of God who has made it clear through salvation history, as quoted in the Catechism, that homosexual actions are one of the “sins that cry to heaven.” A flag that betrays God should not be flown from Catholic schools. Catholic schools should honor God by following his laws and teaching children to do the same. As Jesus says, “If you love me, keep my commandments.”

7. June is the month of the Sacred Heart where Catholics especially venerate the mercy and the love of God. Instead of honoring a symbol closely associated with lifestyles and behaviors condemned by the Church, Catholic schools should honor and promote the image of the Sacred Heart of Jesus on account of his all-inclusive love from which nobody is excluded. Catholic children should be given images and messages that help them on the path to salvation, not symbols that could potentially lead them along the path to damnation.

In the end, Catholic schools should celebrate virtue, not vice. They should promote chastity, not immorality. They should turn to the symbols of their own faith when it comes to promoting messages that all are loved, accepted, and wanted. The greatest symbol of love that Christianity boasts of is the cross of Jesus. If messages of inclusivity and acceptance are wanted in Catholic schools, what greater symbol can there be but of the God who became man, who stretched out his arms on the cross in an invitation for all to come to him who are weary and burdened, and he would give them rest in his sacred heart? Jesus’ arms on the cross are open wide for anyone to come to him to receive his love. The Catholic Church already has beautiful powerful symbols to show what love looks like. It’s time for Catholic schools to start using them.