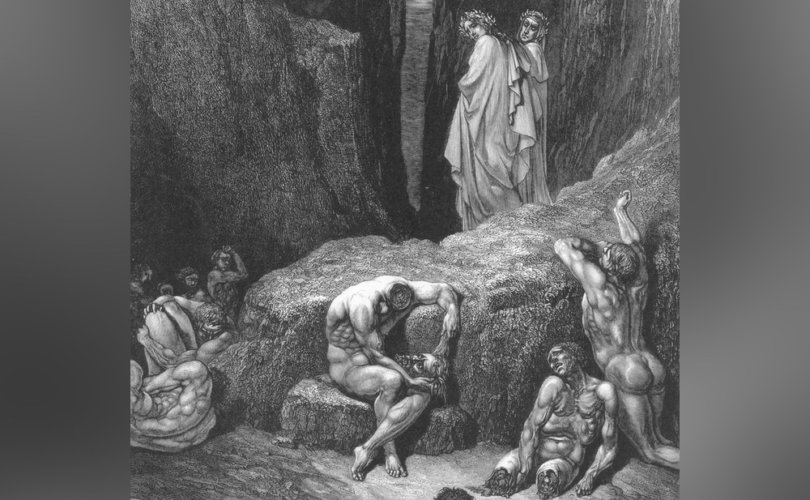 Virgil leads the author past a group of wretched souls contemplating their missing limbs and heads. An engraving by Gustave Dore, illustrating Canto XXIX of Dante's Inferno, written circa 1310. Hulton Archive/Getty Images

April 16, 2020 (LifeSiteNews) – This year, 2020, marks the 700th anniversary of the completion of the greatest Christian poem ever written: Dante’s Divina Commedia.

We do not have an exact calendar date—“he put his pen down on the 11th of March”—but we do know that the Florentine poet finished his work in the year 1320. The title given to the work by its author was simply Commedia; Divina was added in the 16th century.

The sense of “comedy” is not that of modern English, something that makes fun of people or makes a person laugh out loud (although there are moments in reading Dante that bring a broad smile or takes one’s breath away). It is comedic in the older sense we see in Shakespeare’s comedies, in which characters suffer trials, setbacks, and anguish before being swept up in a happy ending that they could never have designed for themselves. The characters receive their just deserts and a copious mercy.

The Commedia opens with a famous description:

Midway in the journey of our life
I came to myself in a dark wood,
for the straight way was lost. [1]

There is probably no adult who hasn’t felt this way, lost in a dark wood, at some time in his life. This “dark wood” is capacious enough to remind us of so many different aspects of life—various trials and confusions that beset us, whether personally or when we look to the state of the world or the Church.   Note also that Dante uses both singular and plural, our life and myself. He’s aware we have this journey in common.

Dante goes on to describe the nightmare quality of the wood he was lost in:

Ah, how hard it is to tell
the nature of that wood, savage, dense, and harsh—
the very thought of it renews my fear!
It is so bitter death is hardly more so. [2]

Fortunately, help came for him, in more ways than one, and he made the journey through hell and purgatory all the way to heaven. Here are some of the things he discovered on his journey that may help us if we, too, feel lost in a dark and fearsome wood.

The story that remained most vividly in the mind of my wife when she first read the Commedia in college was that of Buonconte de Montefeltro,[3] who was saved from eternal damnation at the last minute. He was a Catholic who had put off repentance, and in battle he was stabbed in the throat. What saved him? Mary.

…I made my way
wounded in the throat, fleeing on foot
and dripping blood across the plain.
There I lost sight and speech.
I ended on the name of Mary. [4]

Reading this story as a non-Catholic at the time, she found it incredible (in the literal sense), both for the power it ascribes to the Blessed Virgin as well as for the fact that a single act of repentance could be so efficacious. The devil, says Dante, was also incredulous at this demonstration of mercy:

I will tell you the truth—you tell it to the living.
God’s angel took me, and he from Hell cried out:
O you from heaven, why do you rob me?
You carry off with you this man’s eternal part.
For a little tear he’s taken from me… [5]

“Tell it among the living.” Perhaps we need to tell it to ourselves first? As the Memorare prayer reminds us: never was it known that anyone who called on Mary was left without aid. Even in the last extremity. Such is the power of Mary, such is the power of mercy. “‘A tiny tear’ finds an ocean of mercy in reply.”[6]

The second person to highlight is the Sienese noblewoman Sapia. She is on the terrace of purgatory for the envious, where all have their eyes sewn shut.

I sought my peace with God
at the very last and penitence
would not have yet reduced the debt
had it not been for Peter the comb-seller
who in his charity grieved for me
and remembered me in his devout petitions.[7]

Peter the comb-seller, who would have been the social “equivalent of an immigrant street vendor,”[8] prayed for this rich and haughty noblewoman! And his prayers brought her a great way up the mountain of purgatory, significantly reducing her time of purification. Here we see the unity of the Mystical Body in action—in particular, the connection between the Church Militant and the Church Suffering.

But this is only one example of that unity and of the power the faithful have to cause the entire Mystical Body to increase in charity. In the Paradiso, Dante meets some souls in the second heaven, who, shining with glory, see him and say to one another with great excitement: “Here is one who will cause our love to grow.”[9] By helping each other, our love for one another and for God increases.

How often do we consider this? Do we ever consider it? How much it would transform our day-to-day lives if we remembered it! Our little sacrifices and our big ones, our acts of love, our “offering up” of problems or tasks really does make a difference to the world, to the Church. We do not have to be, like Dante, on a journey through heaven; it applies to us also because we are—hopefully—on a journey to heaven. “Nobodies” and “nothings” can make a difference too.

In the Paradiso, the story of Piccarda, the would-be nun in the heaven of the moon, is often quoted, or rather, her famous line, which might be the most quoted of the poem. Piccarda is answering Dante’s question about why those in the lower heavens do not envy the souls who have more glory in the higher levels of heaven. She says: “In His will is our peace.”[10] A profoundly consoling truth. Reaching this peace requires humility, proper detachment, and trust.

My wife shared with me a conversation she had one afternoon with a Benedictine monk from Norcia, which has remained with her ever since. She had asked him how he remained so peaceful among all the bustle and hassle of dealing with guests and tourists in their shop. He said to her: “Peace… is God’s will right now.”

How might we relate these three lessons from Dante to the present situation?

Second, pray for the dead and the dying. Your simple prayer may make all the difference to someone, and you will not know it until (please God) you reach heaven and meet your brother or sister who was and will be indebted to you for ever, just as you will be indebted to so many others.

Third, trust in God’s will. He is not surprised about what is happening. He knows it; He wills or allows it, because for those who love Him, it will work to their good. As St. Pio of Pietrelcina used to say: “Do not fear God, because He doesn’t want to do you any harm at all. Love Him a great deal, because He wants to do you a great deal of good.”

[1] Inferno, Canto 1, lines 1-3. I am using here the Hollander translation of the Comedy.

[8] Baxter, Beginner’s Guide, 93. It’s also interesting to observe that this Peter, a nobody, became a Franciscan hermit and was venerated in Siena as a saint. See Hollander, Purgatorio, 290.