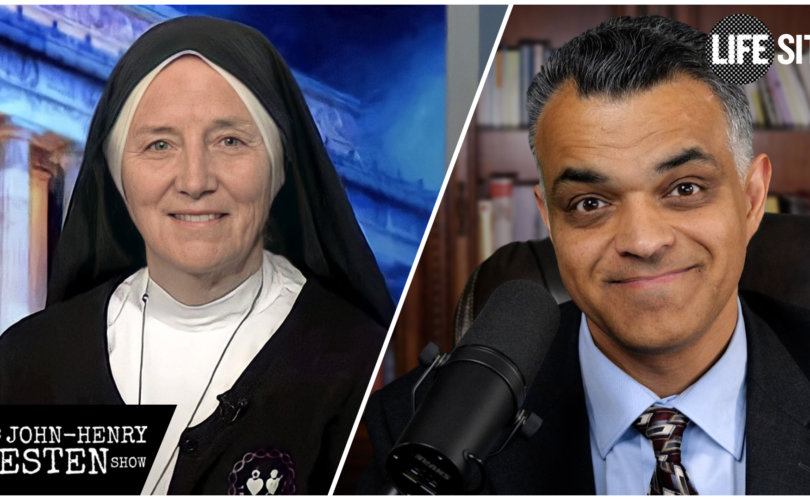 (LifeSiteNews) – Even though Sister Deirdre “Dede” Byrne made headlines around the world as one of the superstars at the Republican National Convention last year, she’s now done something even more controversial. On Wednesday, she spoke at Truth for Health’s Stop the Shot Conference, strongly condemning the COVID so-called “vaccine” and its connection to abortion.

A former doctor in the Army Medical Corps, and currently a doctor-nun, Sister Byrne joined me in this episode of The John-Henry Westen Show to discuss her motivation to speak at the RNC, denying Holy Communion to pro-abortion politicians, the coronavirus jab, and much more.

In the beginning of our conversation, Sister Dede described how God called her to use the platform at the 2020 Republican convention to stand up and be a voice for unborn babies. She said that protecting preborn life is the foundation for any society, and that “if you can’t support the unborn then everything else crumbles.”

Sister Dede pointed out that Christians are fighting a battle not “between Republicans and Democrats, or Left and Right, or Conservatives and Liberals.” But instead she said that we are in a spiritual fight for and in our culture: “a battle between Our Lord and the Devil.”

The doctor-nun highlighted that “Catholics” who promote the murder of the unborn and then receive Holy Communion sacrilegiously in a state of mortal sin, put “their soul in grave danger,” and is a double evil.

Sr. Byrne also mentioned her reasons for having taken a strong stance against the COVID injections. She stated, that from the beginning, the fact that these so-called vaccines are connected to aborted babies, made her reject them.

She added how “it would be hypocritical for me personally to take the vaccine for those reasons,” and that she has now understood more arguments against the experimental shots.

Besides that the virus can be prevented through ethical and moral means, such as early treatments, and that coronavirus is basically not fatal for many people, Sister Dede is of firm belief that the ‘vaccine’ shouldn’t ever be mandated or forced.

The nun also said that forced vaccinations and the masking of children is “diabolical” and “not of God,” since it compels people to live in fear and be controlled by the government.