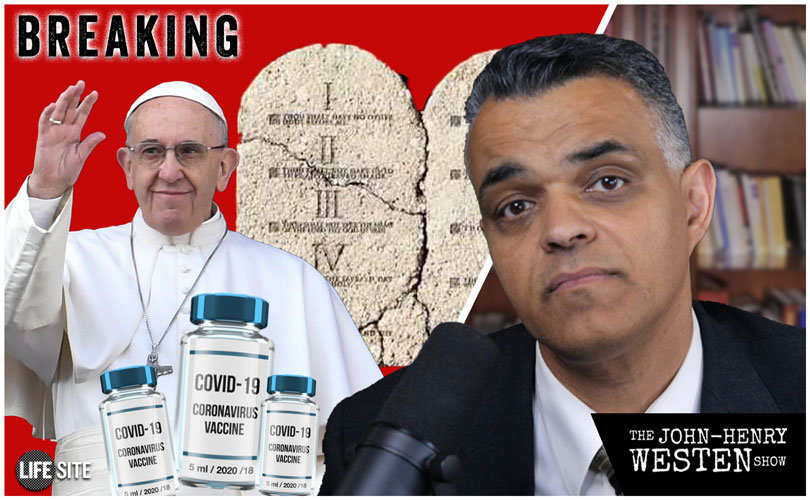 (LifeSiteNews) – I bring you breaking news from the Vatican: Pope Francis has said he does not observe the 10 Commandments as “absolutes.” We have a response from Bishop Schneider to those comments from the Pope.

And while Pope Francis does not have an “absolutist” approach to the 10 Commandments, he certainly does have an absolutist approach to the so-called COVID ‘vaccine,’ making it seem absolutely necessary. He just released another promo video for the COVID jab without even mentioning that they are all abortion-tainted.

Speaking at his General Audience today, Pope Francis said, about the Commandments, “I observe them, but not as absolutes.” That is hard to believe of course, as have been so many of Pope Francis’ statements over the last eight years, so we wanted to show you the video of him saying it so you can see for yourself, and see it in context.

Did you catch that? “Do I live in the fear that if I don’t do this or that I will go to hell? Or do I also live with that hope, with that joy of the gratuitousness of salvation in Jesus Christ?”

The pope suggests fear of hell is somehow opposed to hope and joy in Christ. But nothing could be further from the truth.

In the traditional Act of Contrition, Catholics for centuries prayed: O my God, I am heartily sorry for having offended Thee, and I detest all my sins, because I fear the loss of heaven, and the pains of hell; but most of all because they offend Thee, my God, Who are all good and deserving of all my love.

There is no contradiction in the loving Christ and in obeying the Commandments. In fact, Jesus Himself says in John 14:15: “If you love me keep my commandments.”

I reached out to Bishop Athanasius Schneider for comment on what the Pope said and here was his response. He said: “This contradicts the teaching of the Church and is very much a kind of sola fide teaching of Martin Luther.”

Moreover, Bishop Schneider added, “This affirmation of Pope Francis contradicts the Encyclical Veritatis Splendor of Pope John Paul II, which says, ‘In the Old Testament we already find admirable witnesses of fidelity to the holy law of God even to the point of a voluntary acceptance of death.'”

But he also quoted The Catechism of the Catholic Church, n. 2072, which also contradicts what Pope Francis said. The Catechism states: “The Ten Commandments are fundamentally immutable, and they oblige always and everywhere. No one can dispense from them.” For the full reaction from Bishop Schneider click here.

Do you remember last year when Pope Francis said he approved of same-sex unions? At that time Bishop Schneider called on all the faithful to pray for the conversion of Pope Francis. So many of his statements over the years have caused massive confusion and contradicted the faith, it is no wonder the faithful need to pray for his conversion.

In related news, Pope Francis has released a video today promoting the COVID-19 vaccine and urging people to get vaccinated. In the 3-minute-long video, the Pope said the vaccines bring “hope” to an end to the pandemic and called receiving the vaccine “an act of love.” The video made no mention of Christ and believe it or not never even mentioned the fact that all of the currently available COVID vaccines are abortion-tainted.

“Most vulnerable?” That is mind-blowing. When we speak of the most vulnerable, pro-lifers most often mean children in the womb who are without doubt the most vulnerable class of people on the planet. These COVID jabs being promoted unabashedly by Pope Francis were developed on the backs of aborted babies. They were all produced using aborted fetal cell lines for testing purposes, and the aborted baby who was killed to extract those cells from her kidney is known and beloved by Almighty God.

As tyrannical governments all-over the world are mandating the vaccine, the split in the Catholic Church over the issue is becoming more extreme and generally lines up along the lines of orthodoxy.

“The crime of abortion is so monstrous that any kind of concatenation with this crime, even a very remote one, is immoral and cannot be accepted under any circumstances by a Catholic once he has become fully aware of it,” they also wrote. “One who uses these vaccines must realize that his body is benefiting from the ‘fruits’ … of one of mankind’s greatest crimes.”

Cardinal Raymond Burke, whom we are all praying may pull through his fight with COVID, has said “with regard to vaccination, it must be clear that it is never morally justified to develop a vaccine through the use of the cell lines of aborted fetuses. The thought of the introduction of such a vaccine into one’s body is rightly abhorrent. At the same time, it must be clear that vaccination itself cannot be imposed, in a totalitarian manner, on citizens. When the State takes on such a practice, it violates the integrity of its citizens.”

Some bishops have gone so far as refusing to allow their priests to give religious exemption letters to faithful Catholics pleading for such letters from their priests in order to conscientiously object to the mandates that are costing them their jobs, schooling, and freedom to travel.

Such bishops point to Pope Francis’ pro-mandate position. On August 19, 2020 Francis called for the so-called vaccine to be “universal and for all.” Shortly after he would give a television interview in which he suggested that “everyone” must take the COVID-19 vaccine. “I believe that, ethically, everyone should take the vaccine,” he said. The Pope added “it must be done.”

Also in mid-January the Vatican announced that Popes Francis and Benedict had both taken the abortion-tainted vaccine. And only a month later came the news that Vatican employees who refused the abortion-tainted COVID injections would lose their jobs. Only people who have received coronavirus vaccines may attend Pope Francis’s Mass during his planned visit in Slovakia this September, according to the country’s health minister.

Moreover, a July 29 statement from the Vatican Museums confirmed that, as of August 6 “and until further notice, access to the Vatican Museums and all related areas will be permitted only to those in possession of a Green COVID-19 Certification (Green Pass or equivalent certificate).” So as we can see, while Pope Francis says he does not support absolute obedience to God’s Commandments, he certainly seems to support absolute obedience to tyrannical governments mandating the abortion-tainted COVID jab.

We must, as Bishop Schneider advised in a message to the Pope, pray for his conversion. At the time it was over same-sex unions, but it could apply equally to this new statement of the Pope’s against the absolute obedience of the Commandments.

Addressing the Pope we must say: “For the sake of the salvation of your own immortal soul, for the sake of the souls of all those persons who through your approval of the same-sex unions are by their sexual acts grievously offending God and exposing their souls to the danger to be eternally lost, convert, retract your approval and proclaim with all your predecessors the unchangeable teaching of the Church.”