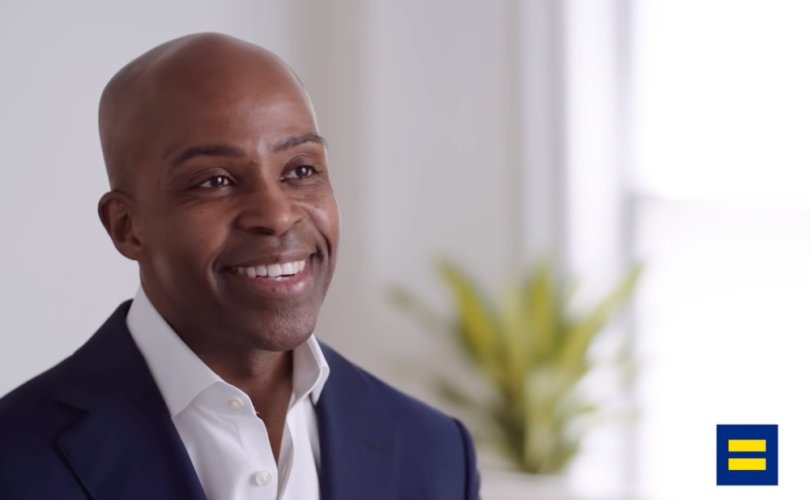 WASHINGTON, D.C. (LifeSiteNews) – The head of the nation’s largest, most powerful pro-LGBT lobbying organization has been fired for the role he played in helping his previous employer, now-disgraced former New York Governor Andrew Cuomo, discredit one of his sexual assault victims.

Yesterday’s ousting of Alphonso David as president of the Human Rights Campaign (HRC) not only reveals not only the hypocrisy of an organization purportedly dedicated to ‘human rights’ and combatting discrimination and harassment, it also blows wide open the lie about the organization’s primary purpose. Purported LGBT ‘rights’ are a cover for what is nothing more than a propaganda arm of the Democratic Party’s establishment.

David, once celebrated as HRC’s first black president, was terminated on Monday by HRC’s board of directors “for cause” –– implying that the board had reason to believe that David was guilty of serious error or grave misconduct –– in what is described as a unanimous decision aside from two abstentions.

Cuomo aides then leaked the file to media outlets, including the Associated Press, The New York Times, The New York Post, New York Daily News, the Hill, and CBS.  Cuomo’s team sought to retaliate against Boylan because she had declared on Twitter that the New York governor was “one of the biggest abusers of all time.”

Do you see who these people are?

Glenn Greenwald, one of the nation’s leading truth-telling political journalists and who self-identifies as ‘gay,’ fired off a fusillade of Tweets exposing the true nature of HRC:

“The head of HRC — the lavishly funded Democratic Party propaganda arm that masquerades as an LGBT advocacy group — got caught helping ex-Gov. Cuomo leak personnel files of his accuser to the media and now depicts himself as the victim, refusing internal demands that he resign,” began Greenwald.

The head of @HRC — the lavishly funded Democratic Party propaganda arm that masquerades as an LGBT advocacy group — got caught helping ex-Gov. Cuomo leak personnel files of his accuser to the media and now depicts himself as the victim, refusing internal demands that he resign. https://t.co/fnMpgCBHF7

“Remember when, in 2016, Bernie said that he thought HRC and Planned Parenthood — which had endorsed Hillary — were part of ‘the Democratic establishment’ and Dem establishment mavens pretended to be angry and offended as it if weren’t indisputably true?” he asked.

“This HRC group is a pure embodiment of swampy DC sleaze,” explained Greenwald.

“They are funded overwhelmingly by the largest banks and corporations, with a few gay oligarchs thrown in for good measure,” he continued.

This @HRC group is a pure embodiment of swampy DC sleaze. They are funded overwhelmingly by the largest banks and corporations, with a few gay oligarchs thrown in for good measure. They take in *$50 million a year*. For what? Who is helped? It’s just a Dem Party front group. pic.twitter.com/48sxw4xDUY

“Just a repulsive joke of an organization. Putting ‘Human Rights Campaign’ in its title and then bestowing awards like this on Raytheon, then taking its money. Pure sleaze. I hope Alphonso David stays as its Executive Director:  makes their values clear,” said Greenwald.

Just a repulsive joke of an organization. Putting “Human Rights Campaign” in its title and then bestowing awards like this on Raytheon, then taking its money. Pure sleaze. I hope @AlphonsoDavid stays as its Executive Director: makes their values clear.https://t.co/3ERcUbDav7

“President of the Teacher’s Union defending HRC Executive Director Alphonso David — of course — even after he got caught helping ex-Gov. Cuomo leak personnel files to the media to smear one of his accusers.”

“Do you see who these people are???” he asked of the Twitterverse.

President of the Teacher’s Union defending @HRC Executive Director @AlphonsoDavid — of course — even after he got caught helping ex-Gov. Cuomo leak personnel files to the media to smear one of his accusers. Do you see who these people are???https://t.co/MDMG0sRKcr

The brazen hypocrisy of HRC and other Democrat ‘rights’ groups

The drama between HRC and its now former head shines a harsh spotlight on progressive non-profit ‘rights’ groups as not only rife with hypocrisy, but as more regressive than progressive.

“Alphonso David, who’s the actual culprit, releasing an accuser’s personnel files as a slimy means of discrediting her when Cuomo was on the hot seat, which happened in his previous job as chief counsel to Cuomo, refused to blame himself at all, and put out a tweet claiming victimhood,” explained American Thinker’s Monica Showalter.

“He apparently has no shame at all and his response is ridiculous.”

— Article continues below Petition —
PETITION: Stand with Hungary for protecting children from LGBT propaganda
Show Petition Text
44667 have signed the petition.
Let's get to 45000!
Thank you for signing this petition!
Add your signature:
Show Petition Text

Showalter pointed out three things that “leap out” with these “crash-and-burn incidents:

In May it was revealed that under David’s direction, the Human Rights Campaign had joined Media Matters for America, GLAAD, and NARAL Pro-Choice America to strong-arm Facebook into permanently banning LifeSiteNews.

HRC then published on its website a joint statement by the four powerful anti-life, anti-marriage, anti-family, and anti-human dignity social influencers boasting of their takedown of LifeSiteNews and vowing to do more to further silence LifeSite’s pro-life messaging.