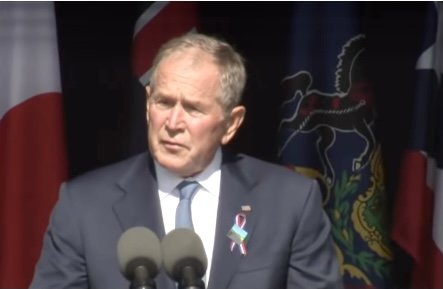 (LifeSiteNews) — Former President George W. Bush sparked outrage on Saturday when he insinuated that January 6 U.S. Capitol protesters were terrorists no different from those who hijacked and weaponized commercial airliners on the morning of September 11, 2001, killing nearly 3,000 Americans.

Speaking in Shanksville, Pennsylvania, on the 20th anniversary of the crash of United Airlines flight 93, Bush said, “We have seen growing evidence that the dangers to our country can come not only across borders but from violence that gathers within.”

The former president was correct. There are Americans who share with Al Qaeda terrorists “disregard for human life,” who “are children of the same foul spirit.”

However, these homegrown jihadists are not conservatives or patriots or Trump supporters as Bush implied. They are those who promote and sanction abortion, cavalierly condoning the massacre of millions of innocent children.

President George W. Bush is the son, husband, and father of monsters. Mother Barbara Bush, wife Laura, and daughter Barbara — three generations of Bush women — have famously supported the murder of children in their mothers’ wombs. Only daughter Jenna remains silent on the issue.

The most horrific violence “that gathers within” our borders has been displayed in his own family for decades, and yet he has not disavowed these women and their high-profile contribution to the worst type of violent extremism present in the world today.

On Saturday, the former president managed to out himself as a hater of heartland Americans, disgracing himself and his presidential legacy in the process.

“Bush helped widen [national political] divisions by endorsing a Rachel Maddow-esque argument that an equivalence exists between the plane-hijacking, murderous terrorists of Sept. 11, 2001, and the Capitol rioters of Jan. 6, 2021 — a comparison that has no basis in fact but has done much to sour the national debate,” wrote the Washington Examiner’s Byron York.

“You’d think he was talking about Antifa — but he’s talking about you,” tweeted Claremont Institute senior fellow David Reaboi. “I can’t think of anyone else who’s made such a disgusting disgrace of his legacy.

“On a solemn day — where many of us are paying respect to the lives of those who were lost through remembrance, prayer, and acts of service — Bush is crafting the narrative that AMERICANS are the new terrorists,” said Florida state Rep. Anthony Sabatini.

“What an absolutely sick individual and an embarrassment to our nation,” Sabatini added.

The former president accuses conservatives as American jihadists while harboring the worst sort of terrorists in his own family.  If he’s serious about what he said in Shanksville, he has a “duty to confront them.”