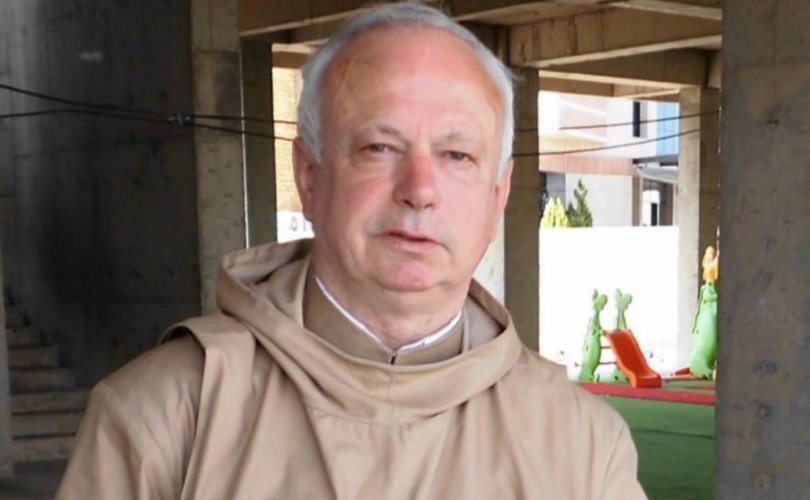 LENS, France (LifeSiteNews) — A priest in the north of France was physically attacked and subjected to verbal abuse because of his clerical state by a man of North African appearance last Wednesday, in what under French laws comes under the heading of anti-religious “racism.”

Father Jean-Paul Argouarc’h, 75, who wears the beige habit and scapular of the traditional Institute of the Holy Cross of Riaumont (Sainte-Croix de Riaumont), was at a petrol station near Lens, close to the Belgian border, on Wednesday evening, hoping to fill up his car, when the “racist” incident occurred.

France is facing growing gasoline shortages triggered by massive strikes called by the still-powerful communist labor union CGT in the refineries two of its major energy groups, Total and ExxonMobil, at a time when gas and diesel prices are already high. The dearth began to be felt in the northern regions of France earlier last week before spreading to the rest of the country.

Last Wednesday at 8:40 pm, Fr. Argouarc’h was waiting for his turn in a station which was still offering petrol for sale when he saw a man harassing a woman who was filling her car, telling her that she didn’t need the fuel whereas he did because he “worked,” he said, and she “didn’t.” She answered that she had children and needed to fill her car for her daily commutes.

The priest got out of his car in order to support the woman being verbally attacked, only to be shouted at in his turn by the aggressor, who exclaimed: “So you want petrol, too!” Argouarc’h answered “Yes,” for his “daily visits to the elderly in nursing homes.”

At this point the aggressor had seen that Fr. Argouarc’h was wearing a religious habit and realized he was facing a priest. He started to hurl abuse at him, calling him a “dirty priest,” using other insulting terms, and hitting him violently several times on his left arm.

The attacker also shouted: “I’m a son of the FLN.” This was a reference to the communist-inspired Algerian “National Liberation Front” that made war on the French colonial powers from 1958 until 1962, when France left Algeria in tragic circumstances. The oil-rich country then sank into misery, resentment against France, and violent, radical Islam. France colonized Algeria in 1830 when it did not exist as a country but was under lax Ottoman rule. The area’s “Barbary pirates” had sailed the Mediterranean seas to capture Western cargo and sell the crews of the ships they boarded as slaves.

— Article continues below Petition —
Demand that the Archdiocese of Indianapolis let Kim Zember speak!
Show Petition Text
4966 have signed the petition.
Let's get to 5000!
Thank you for signing this petition!
Add your signature:
Show Petition Text

Since Algeria gained its independence in 1962 (after a war marked by terrorist attacks and barbaric crimes on the part of the “freedom fighters”), countless Algerians have left their country and crossed the Mediterranean to find work and fortune (and generous welfare handouts when those first two were not forthcoming) in France. It is hard to say how many Algerian immigrants now live in the European country: official (and therefore conservative) estimates speak of some 900,000 Algerian nationals and many more second-generation Algerians who are French nationals by birth on French soil.

Meanwhile, the rift between the two nations still makes itself felt with Algeria repeatedly claiming reparations for “war crimes” and “exploitation.” The incident involving Fr. Argouarc’h was also in a way a throwback to that past in which Islam in Algeria was angry at the presence of representatives of what it saw as a Catholic nation.

Although young and strong, the aggressor was unable to wrench Argouarc’h’s mobile phone from his right hand as the priest unsuccessfully tried to take a photo of him. It was only when Argouarc’h said that “the whole of France” would hear of the attack that the aggressor finally took to his heels, continuing to shout abuse, perhaps out of fear of video surveillance that is active day and night in French petrol stations.

Fr. Argouarc’h, whose arm was hurting badly, later went to the emergency department of a nearby hospital to have it checked and was told that nerves and muscle of his left arm had been very badly contused. Two days later, when he spoke with LifeSite at an event near Paris celebrating the 40th anniversary of the Chartres pilgrimage, the priest still could hardly move his arm. Attempts to lift it were very painful.

He told LifeSite that it was important that other priests should know that he had been attacked by a self-proclaimed Algerian because of his priestly dress. He warned that such aggressions may well become more frequent in the years to come. “Many priests think that they are not at risk and that these things only happen to others, but that is not true,” he said.

Thanks to his medical certificate, Fr. Argouarc’h had been able to file a complaint at his local police station in the north of France on Thursday, under the heading: “Violence followed by incapacitation not exceeding 8 days, committed because of the victim’s race, ethnic origin, nation, or religion.” This is a legal delict in its own right, and it carries heavier penalties than plain “violence.”

This is rarely quoted in police reports and penal procedures when the violence, injury or insults target French “natives” or Catholics and their sacred buildings and symbols.

For instance, only last month, a statue of the Virgin Mary in a small replica of the grotto of Lourdes was attacked in La Chapelle-Thouarault, a village near Rennes. It was ripped from its base, damaged in the process, and moved to a nearby post where it was set up, forlorn and broken, for passers-by to see. Yet the village’s mayor went out of her way to say that the vandals had “no anti-religious intentions” because they had not left anti-Christian graffiti at the scene of destruction.

For Fr. Argouarc’h, the insults that directly targeted at his identity as a priest were proof enough that the attack was truly aimed at the Catholic faith and those who serve it.

He will be represented during his legal proceedings – for the moment against a person unknown – by the French defense league, AGRIF (Alliance générale contre le racism et pour le respect de l’identité française et chrétienne – that is, the “General alliance against racism and for the respect of French and Christian identity”). From the judicial point of view, the AGRIF’s legal statute allows it to seize the courts in cases of “racism” (a blanket concept which in France covers all acts of “discrimination” and aggravated delicts against victims because of their origin, nationality, sex, handicap, age, religion, and several other distinctive features.) When an individual is so attacked, the AGRIF can assist the victim at his or her request.

Fr. Argouarc’h, a former military paratrooper, is ready to fight this battle. As a religious, he long headed the “Riaumont Children’s Village” where boys with social problems were welcomed with open arms, getting schooling and professional training that helped many to find their way back into society. The work of Riaumont remains faithful to the traditional Mass, and its hundreds of scouts and guides are a prominent feature of the Paris-Chartres pilgrimage each year.

Riaumont came under fire from secularist forces a few years ago as a flimsy case of “minor violence” against some of the boarders was brought against four of the brothers, who live according to the Benedictine rule. “Over 300 boys were interviewed: only 11 complained. There is not a single medical certificate. So there is absolutely nothing serious,” Fr. Argouarc’h told LifeSite when commenting the proceedings in January 2019. That story received nationwide media interest, while the proven beating up of a Catholic priest only attracts the attention of the so-called “alternative media.”

Just another case of two weights and two measures?