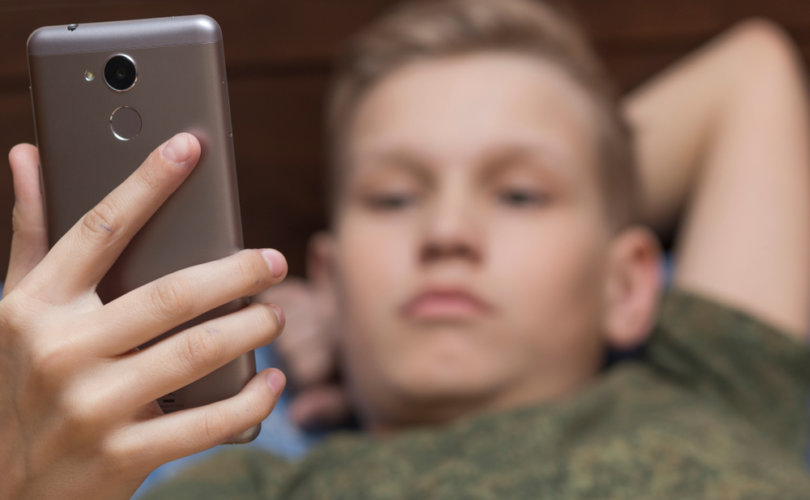 December 13, 2018 (LifeSiteNews) – Earlier this week, I wrote a column on the recent news out of Kansas that the rates of children sexually assaulting children have been sharply increasing for some time, and noted that in the United Kingdom police have also reported this trend (40,000 instances in only a couple of years) as well. Shortly after it was published, I received an email from a mother who reached out because she had not seen this trend reported on anywhere else.

The first mistake, she wrote, was giving her teenage son a smartphone. “My big regret is giving our son an iPhone on his birthday during his 8th-grade year,” she said. “He wanted a phone so bad. My husband and I thought it was a good reward for good behavior. Getting ready to go to high school in a few months, his friends had one, he gave us no problems and was a very good student. He was so excited when he opened his gift. He even had tears. Little did we know, we would be all brought to tears because of the dangers of that phone.”

The pressure these parents were under is extremely common. I’ve frequently written that children should not be given a smartphone, even in high school (if at all possible), and many parents respond by saying that the requests for a smartphone from their children are relentless. Much of teenage social life now takes place in a cyber-world of social media that is only accessible via a smartphone, and thus children are desperate to obtain the device that gives them access to this world.

“That summer, we did not realize he was trying out what he had learned on these porn websites—sexual abuse—on my grandchildren,” she said. “Because he was a ‘responsible’ boy, his sisters, who are married, would have him babysit while they would run errands. I happened one day to drop in to visit and I rang the doorbell. My son answered the door and immediately went into the bathroom. My sweet granddaughter came up to me and casually said what my son had done to her. I immediately dropped to my knees and asked her to repeat what she had just said.”

That was the moment the nightmare began:

I could not believe what I heard her say. She repeated herself and I was stunned. I hugged her and then I heard the garage door start to open. My daughter was home. I grabbed my granddaughter and told her to tell mommy what she had told me. My poor daughter. The look on her face was horror, but she wanted to remain calm for her daughter. She immediately told her how proud she was in telling us what happened.

My daughter and I just looked at each other in total shock and disgust. What are we going to do? We kept saying that over and over. I told my daughter to keep her daughter away so she could not see me confront my son. Still in the bathroom, I calmly told him to hurry up, we needed to go home. He came out and I told him to get into my granddaughter’s room where this act happened. I shut the door and quietly but directly told him what my granddaughter said. He denied it, but I told him that four-year-old girls do not describe what just happened to her without it being done to her.

I told him to get into the car and I told my daughter I would be calling the police. My son-in-law did. The police came to their home and said that they would be questioning our son in the morning. We called our priest to come and he stayed with us as we were in complete shock, horrified, and totally crushed. In the morning we took our son to the police station and told him to tell the police the truth. After he was questioned, the investigator told us that he would be going to juvenile hall and probably spend a few days there. He had turned 13 a few months before, and the district attorney was not going to let him go home…the DA wanted him to go to a state prison for juveniles, register as a sex offender for the rest of his life, and not get out until he was 25 years old.

At this point, the mother writes, she and her husband decided to fight for their son, as they felt he was a child and also needed help. They hired a lawyer, terrified of what might be done to their son by other inmates if he got sent to state prison:

They hired a psychologist, who concurred with the therapist’s opinion. The district attorney, however, was determined to send the boy to state prison, and used delaying tactics as well as a “divide and conquer” strategy in the understandably crushed family. Eventually, the sentence was ten months in juvenile hall, and weekly therapy thereafter. But there are many others who remain registered sex offenders for the rest of their lives for horrific crimes committed when they were 12 or 13 years old. The impact of those events has irreparably changed the family:

We relive this nightmare over and over. We now have two separate families. By the grace of God our daughters are still in our lives. We were so fearful they would be estranged from us for fighting for our son…It has put a strain on our relationship, but we love each other and hope time will heal these wounds. They do not want anything to do with our son. Our daughters only come to our home when our son is in school. Their home is not a place they can just drop in as they used to do to hang out with us. They miss their home, but as long as our son is here they do not come over. I pray for healing.

This is not what I thought our family would be like. We are so proud of our family. My daughters each married awesome men and had beautiful children. We had such a beautiful life before this all happened. We cannot go back to the way it was. It is like a death. Truly it is. I miss our life before we bought our son an iPhone. My son will never own one as long as he is our responsibility. The Internet on our home computer is monitored also. Porn is an evil that tears family apart. I strongly recommend not letting children have an iPhone, smartphone, etc.

This is something that is not talked about. No one wants to talk about the horrors of porn. My husband and I suffer alone. It’s a very heavy cross to bear. Trying to be a mother/father to our daughters and our son, a grandmother/grandfather to our grandchildren, to make loving memories that as a parent or grandparent dream to have with their children/grandchildren are very tainted because of this scourge to our family. We pray one day for healing and forgiveness and reconciliation. If this can save families from dealing with what we are dealing with, it would help the bitterness we are experiencing.

I have said this before, and I will say it again: If we as a culture do not address the pornography problem, it will destroy us. The violent sexual ideology it is teaching to an entire generation is transforming the way millions of people see sex, relationships, and even each other. Pornography is ruining marriages, ruining families, and ruining lives. It is long past time that we woke up and realized that we simply have no choice: We must deal with this, because it is everywhere.