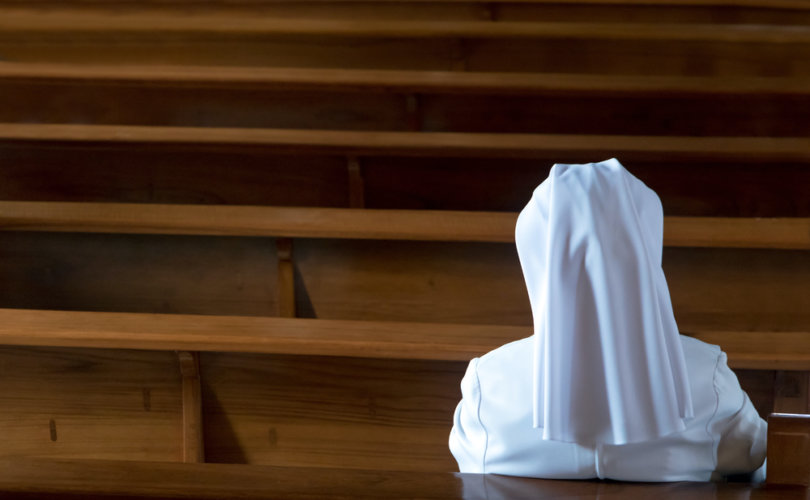 PARIS, France (LifeSiteNews) — Recent protests in New York at the first showing of Benedetta, a “historic” film that crudely tells the story of a purported mystic nun tried for lesbianism in 17th century Italy, were ridiculed in the mainstream press while the Catholic hierarchy worldwide appears to have remained totally silent over the blasphemous picture. In France, where the film premièred in July at the Cannes festival, there was literally no reaction on the part of Church leaders – not even to object to the fact that it was restricted only to audiences aged 12 and over.

The film, dubbed a “mystic farce” in one Belgian daily, is due to be released in the U.S. on December 3.

Benedetta attracted almost no viewers in France: while the latest James Bond film totaled nearly 3.5 million spectators in four weeks, the near-pornographic Paul Verhoeven picture had a lackluster start with about 200,000 viewers during its first week in theaters as of July 14; it obtained fewer than 130.000 more during the following three months.

Gross, indecent, vulgar, and willfully abusive of all that Catholics hold sacred, Benedetta was thankfully savaged by a large section of French critics, who mocked its histrionic overtones and quirky portrayal of supposedly mystic scenes. But it received positive and even enthusiastic notices from some French critics, as well as from the BBC, the Hollywood Reporter, Variety, indieWire, and the like, who called it “gleefully impertinent,” “religiously sinful and absurdist” (World of Reel), “shockingly hilarious,” “a vision of the body as an instrument of the church but as a subversive powerful instrument.”

The story behind Benedetta is a true one, unearthed by university professor Judith C. Brown from the archives of the city of Florence. Her book retells the trial of Benedetta Carlini, a 17th century nun who was placed in a Theatine convent in Pescia, Tuscany at age 9 by her parents and went on to have “visions” both religious and erotic. She claimed to have received the stigmata of Our Lord, was revered as a saint, and was made abbess of her convent until a formal investigation revealed that she had not only faked the supernatural phenomena that had made her famous but also had homosexual relations with a young nun, Bartolomea, who slept in her room to preserve her from apparently demonic attacks. Benedetta escaped being burned at the stake for her deceit – the archives of her process mention no condemnation – but she was forced to live as a prisoner within her convent for 35 years until her death in 1661.

This tragic tale was told by Brown in Immodest Acts: The Life of a Lesbian Nun in Renaissance Italy. Despite the title, it is mainly a story of possible demonic possession, psychiatric disease, or plain greed for power and fame, as exposed in a very detailed ecclesiastical enquiry at time of the events. Brown highlighted her own angle, that of the history of sexuality and “gender,” but her work was at least historic. It is the film, which is loosely based on her work, that made the “immodest acts” central to the story, and portrayed them without discretion, the better to express scorn for the faith that leads men and women to choose chastity and the religious life.

Paul Verhoeven, the Dutch director of Robocop, Basic Instinct, Total Recall and Elle, pounced on the sordid details with his customary crudeness and transformed it into a sexually explicit, grotesque, and blasphemous narrative, miles apart from a mere historical study of a spurious Italian mystic unable to deceive her contemporaries for more than a few years. The most disturbing scene even shows the two nuns using a statuette of the Blessed Virgin in an obscene way. Our Lord is portrayed as a ludicrous character, hitting away at a serpent with a sword or speaking to Benedetta like an evil spirit in bizarre “visions” that mainly show the director’s incomprehension of, if not plain aversion for, God the Son.

Verhoeven has protested that he had no intention of attacking the Catholic faith. But he deliberately left an element of doubt in his picture regarding the fraudulence of Benedetta’s “visions,” and made clear that, in his opinion, the Church is hypocritical about the sexuality of its priests and religious – a sure hit at a time when the public eye is focused on the abuse committed by a minority. During an interview, he explained: “We humans are basically animals, aren’t we? We have a body, instincts… Benedetta can’t resist the call of the flesh, but why should she resist it? It would be stupid. Originally, human beings were primates. Adam, Eve, the apple, the snake, the tree of wisdom, all that never existed! I think that knowledge is a good thing. Science tells the truth, legends make up stories, that’s what I think.”

The fact that Verhoeven portrays his beliefs by debasing that which we hold most sacred — Jesus Christ, His Blessed Mother, the goodness of a chaste religious life well lived — shows that with Benedetta, he was seeking to make an offensive and ridiculing statement against Christianity. His lead actress, Virginie Efira, said how overjoyed she was to have joined a film about “the final taboo in the Church, a case brought against a woman because of her homosexuality.”

Benedetta was banned in Russia by the Ministry of Culture, which withdrew the film’s screening license without an official explanation. The film was to have been released there on October 7 under the title “Temptation.” The French “center-right” daily Le Figaro presented the banning of Benedetta as a symptom of Russia’s submission to the “orthodox taliban,” suggesting that a group of Christian activists accused of burning down several buildings in protest against the release of a film about Czar Nicholas II was responsible for the “lobbying” that led to the government decision. There was not a word about the legitimate hurt and anger felt by Christians when their faith is defaced with lewd and blasphemous scenes.

Verhoeven himself complained about the negative reception of the explicit “sex-toy” scene, claiming that “today’s world” has become “prudish.” “We have returned to a puritanism that I can only remember from the Second World War, when I started watching films as a seven-year-old.”

However, to date, Benedetta has been shown in several western countries without provoking public protests. As mentioned above, in France it was approved for audiences aged 12 and over. If that is a “prudish” decision, decency has become an empty word.

In the United States, a protest was organized by the TFP (the American Society for the Defense of Tradition, Family and Property) at the New York Film Festival where Benedetta premiered on September 26. A group of young men bore signs saying: “We vehemently protest the blasphemous lesbian movie Benedetta that insults the sanctity of Catholic nuns,” “Why the endless insults to Jesus?” and “Stop blasphemy now!”

The TFP has announced that it will hold “rosary rallies of peaceful protest and reparation in front of the four well-known theaters where Benedetta will premiere on December 3: the IFC Center and Film Lincoln Center in New York City, and at The Royal and The Alamo Drafthouse in Los Angeles.”