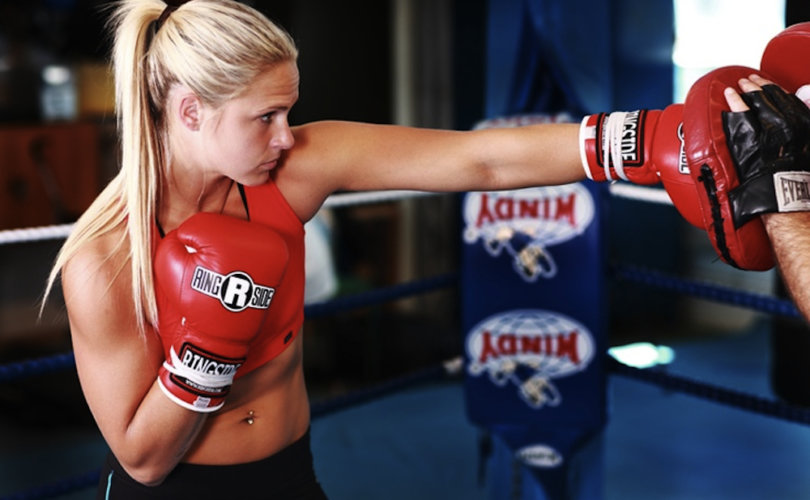 July 25, 2017 (LifeSiteNews) — A 15-year-old male in Connecticut sure does well in girls’ track and field events. On May 30, Cromwell High School freshman Andraya Yearwood left his testosterone-challenged competitors in the dust as he won the 100-meter race in 12.66 seconds and the 200 meters in 26.08 seconds.

Yearwood, who “identifies” as a “girl,” began his career in girls’ track events without stopping for hormonal treatment or castration, so he has quite the hormonal advantage. According to the Mayo Clinic, a 15-year-old boy can produce up to 1,200 nanograms of testosterone per deciliter of blood whereas a 15-year-old girl produces just 7 to 75 nanograms. And testosterone comes in mighty handy in athletics — for one thing, it increases the strength and size of muscles.

You know and I know and everybody knows — deep down if not up front — that the average human male is a faster runner than the average human female. So where’s the challenge, the fun or the glory for a teenage boy in beating a bunch of teenage girls to the finish line?

Whatever it is, it probably beats coming in dead last, which is what Yearwood would have done had he raced against the boys. According to WorldNetDaily.com, the slowest times for boys who participated in the Connecticut 100 meters and 200 meters were 11.73 seconds and 25.59 seconds.

Since this is American high school sports we’re reading about, I smell scholarship money. Runner-up Kate Hall was robbed — and maybe of more than just first place. From the sound of it, she already has been robbed of her ability to tell the truth about Yearwood, which is that he is a man, a boy, a male, a guy, a bloke, a chap. And, believe me, women are usually good at discerning this kind of thing, especially when out alone after dark.

But Kate’s lucky in a way. She’s a runner. And this is where it all gets personal for me because back in the day I was a boxer. A lady boxer or, to re-create the Cockney accent of my coach, “a lye-dee box-sah.”

This was in the 1990s, when boxing was just becoming fashionable for gently brought up, university-educated women. Women’s boxing was not yet an Olympic sport, and a lot of old pros were wailing that women had no place in the ring, as we were just too fragile, etc. They weren’t totally off base there, but I’ll write about that another day.

I started boxing to settle a bet with a friend. One of us thought women hitting women for sport didn’t contribute to women’s full flourishing as human beings, and one of us did. I forget who thought what, but in the end, it was I who called up the Regency Boxing Club and asked if they took women.

“I been lookin for a lye-dee boxah,” said the English guy who came to the phone, and so off I went to become Hamilton, Ontario’s only licensed female boxer, the one who paved the way — I flatter myself — for Jessica “Raging” Rakoczy.

Since I was the only woman in the club, I sparred with men, and they all pulled their punches almost all of the time. Some men just refused to hit me at all, and that’s perfectly understandable: men really not wanting to hit any woman, ever, is a good and natural thing. The tough young trainer who attempted to shout me into greatness was utterly horrified when he inadvertently bloodied my lip. I thought my war wound was cool. He was in bits.

The one guy who lost his head and gave me his best shot was about 15. I was 27. We were sparring in the ring, and I was doing very well, getting in a lot of hits over his rather faulty guard. Our coach, who had overcome this poor lad’s reluctance to fight me at all by shouting “She’s not a woman, she’s a fightah,” suddenly changed his tune and chortled, “Are you gonna let a girl beat ya?”

He saw red, my nose gushed blood, and I ended up in emergency awaiting an x-ray.

“There may be a hairline fracture,” said the doctor, “but it’s too small to see.”

To be honest, I wasn’t very talented, and I’m pretty sure Jessica Rakoczy — a born champion from the moment she learned how to tie her handwraps — pulled her punches when she sparred with me, too. But I learned a lot. And one of the most important things I learned was not to box competitively with men. Pound for pound, men are stronger than women, and that’s just the way it is. Sure, I could knock a guy down — but I don’t like to think what could have happened, outside the safety of the ring, when he got up again.

I also learned that boxing, even amateur Golden Gloves boxing, could be pretty corrupt, and there were coaches out there who were happy to match their rising female stars with inexperienced patsies. One of the best protections for a boxer, male or female, was the weight-based rule about opponents: for example, if I weighed 119 pounds, I could fight a 128 pounder. If I weighed 117 pounds, I couldn’t. Physically, opponents had to be more or less equal. And that was fine with me.

Imagine then my horror, my abject disbelief, when I read about “transgender” Fallon Fox fighting female mixed martial arts fighter Tamikka Brents. Fox, who had his “transgender surgery” when he was 30, beat the stuffing out of Brents. He broke her eye socket and gave her a concussion. Color me so not surprised.

“I’ve fought a lot of women and have never felt the strength that I felt in a fight as I did that night,” said Brents. “I can’t answer whether it’s because [he] was born a man or not, because I’m not a doctor. I can only say, I’ve never felt so overpowered ever in my life, and I am an abnormally strong female in my own right.”

Of course it’s because he was born a man, you crazy woman! He is a man! A man who is a highly trained martial artist! And you got into the ring with him! What were you thinking?

But what I find even more appalling — speaking as a formerly licensed fighter — is that other women got into the ring with Fox without knowing that this reasonably female-looking person (for a fighter, but I’ll write about that, too, another day) was “born a man.” They had no idea Fox had all the advantages of a 5-foot-6 male fighter. Me, I would have sued. More than that, I’d have gone to the police and had him charged with assault, fraud, criminal negligence. And then I’d have sued the licensing body.

When is it OK for a man to beat up a woman? Presumably when he says he is a woman, and they’re both martial artists.

And when is it OK for a man to take a gold medal, a title, an athletic scholarship away from a woman? Why, yet again, it seems that he can if he says he is a woman, and they’re both athletes.

This strikes me as absolutely crazy.