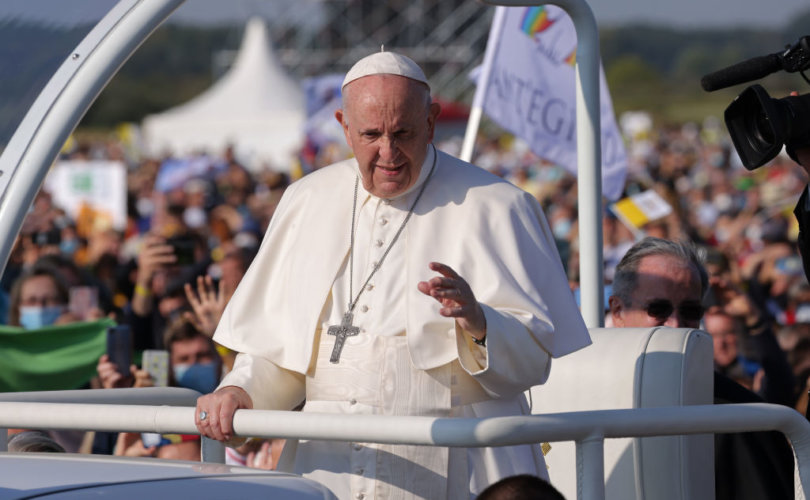 KOŠICE, Slovakia (LifeSiteNews) — Pope Francis suggested we should not approach Confession thinking about our sins, raising alarms among many faithful Catholics.

“Are sins really the center of Confession? What does God want? That you approach him thinking about Him or about your sins? What is central, our sins or the Father who forgives everything? It is the Father,” Francis told young people in Košice, Slovakia, on September 14 during his Apostolic Journey to Budapest and Slovakia.

His words certainly give the impression of contradicting Catholic theology, which teaches that sins are part of what makes up the essential “matter” of confession — that is, the physical gesture or object of the sacrament. As St. Thomas Aquinas says, our sins help make up the matter of confession, “not for approval, but for detestation, and destruction.”

In his Summa Theologiae, Aquinas makes clear that the penitent’s sins “are the remote matter” of the Sacrament (what is being used in the sacrament, that is necessary for its validity). The “acts of the penitent” are the “proximate matter” of confession (that is, how the remote matter — in this case, sins — is used in the sacrament). These acts of the penitent are, specifically, the repentance of one’s sins; confessing them in words; and intention to carry out the assigned penance.

Confession of all unremitted grave sins after a “diligent examination of conscience,” true repentance, and completion of the penance given by the priest are all required for a valid sacramental confession, according to the Code of Canon Law.

The end of the Sacrament of Penance is reconciliation with God, and in the larger context of our lives, God is indeed central. However, Confession specifically requires, by its very nature, a focus upon our sins in order to repent of them.

Pope Francis’ appointed editorial director of the Vatican’s Dicastery for Communication, Andrea Tornielli, has gone so far as to say that Pope Francis has “propose[d]” a “completely different outlook on confession, different from the experience of so many Christians and different from a certain historical legacy.”

Tornielli’s commentary, entitled “A new outlook on confession, the sacrament of joy,” reinforces Pope Francis’ “new” outlook with the subheading, “At the center of forgiveness, there is God who embraces us, not the list of our sins and our humiliation.”

Tornielli rephrases some of Pope Francis’ words in such a way as to reinforce the erroneous idea that it is not a requirement for penitents to “humble themselves” when approaching the sacrament of Penance.

Tornielli’s translation of the Pope’s words reads: “One does not go to confession as chastised people who must humble themselves, but as children who run to receive the Father’s embrace.”

The officially issued Vatican translation reads: “We do not go to confession to be punished and humiliated, but as children who run towards the Father’s loving arms.”

Tornielli’s interpretation of this statement by Pope Francis certainly does not accord with Catholic teaching. While the Church indeed teaches that “Christ … desires that in his Church the gates of forgiveness should always be open to anyone who turns away from sin” (CCC no. 982), it also teaches that we must necessarily humble ourselves before God when approaching the sacrament.

According to the Catechism of the Catholic Church, “Penance requires” “the sinner” to “be contrite of heart, confess with the lips, and practice complete humility.” (CCC 1450)

The requirement that the penitent be truly “contrite of heart,” that is, truly sorry for his sins, is the condition — unmentioned by Pope Francis — of another declaration of his address: “Listen well to this: God always forgives! Understood? God always forgives!”

The Catechism also reads, “Among the penitent’s acts contrition occupies first place. Contrition is “sorrow of the soul and detestation for the sin committed, together with the resolution not to sin again.”

Joy is indeed an appropriate response to Confession, as Scripture says, “There shall be joy in Heaven” for one sinner that does penance (Luke 15:7). But when approaching the sacrament, sorrow is the required disposition. Pope Francis makes no mention of this in his address, but frames Confession as a remedy for when we feel “downcast”: “When we do feel downcast, what are we to do? There is one infallible remedy that can put us back on our feet … go to Confession.”

1
Pelosi receives Holy Communion at Mass presided over by Pope Francis
2
WATCH: John-Henry Westen, Michael Matt react to Pelosi’s Communion at Mass with Pope Francis
3
Pope Francis doubles down on restrictions of the Latin Mass in new letter
4
Princess Gloria: Global elites think they do good but actually serve the ‘prince of the world’
5
Record numbers of German Catholics are leaving the Church amid ‘Synodal Way’
Subscribe to Daily Headlines »