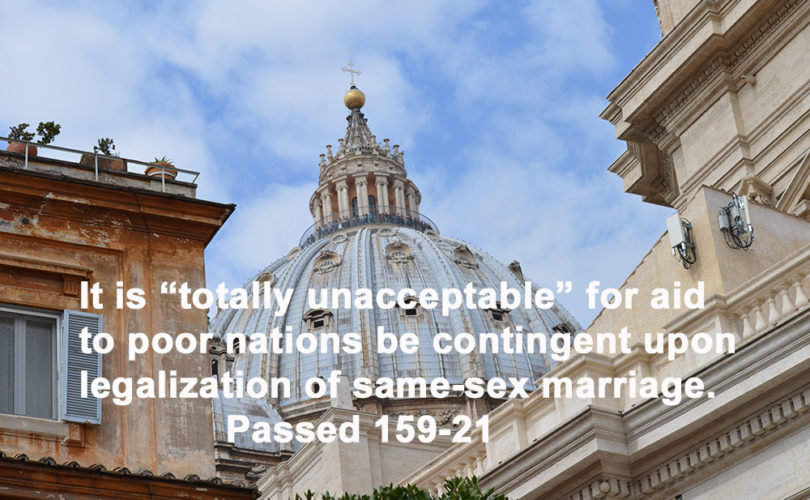 I could not help but note that paragraph 56 of the final Relatio Synodi or Synod Report, which stated that it is “totally unacceptable” that aid to poor nations be contingent upon legalization of same-sex marriage, passed by a 159-21 margin.  Again, 159-21.

Now tell me, how is it that even one bishop voted against that paragraph?

Does this not tell us something about the depth of spiritual sickness of some Catholic prelates and the danger that they present to the faith? To me, any bishop who would not support that motion should be immediately removed from his rank within the Church as he clearly presents a spiritual/moral danger to the faithful. But then again, maybe somehow I am missing something on this.

Also on the homosexual issue, another paragraph, the one stating that those with homosexual tendencies should be “welcomed with respect and sensitivity” was far less welcoming than initially proposed in the midterm report and failed to get the necessary two-thirds majority vote to pass. Nevertheless, it figures that a Canadian bishop expressed disappointment. The Church in Canada has, in practice, for decades been among the most liberal in the world on homosexuality, among other issues.

It was Canada that was among the world leaders against Pope Paul VI's Humanae Vitae.

“I have the impression many would have preferred a more open, positive language.  Not finding it in this paragraph, they might have chosen to indicate their disapproval of it. However, it has also been published, and the reflexion will have to continue.”

It is interesting how Archbishop Durocher could only conceive of that reason for the paragraph not receiving the required two-thirds vote. That, despite the intense opposition we are now all well aware of by numerous synod bishops to any discussion of weakening the Church’s position on homosexuality.

Durocher could not conceive the majority of bishops did not trust, after the shameful manipulations that they had been subjected to, that this issue would be faithfully discussed, no matter how harmless the paragraph wording might seem to be. I suspect the attitude of most was to simply vote down any paragraph that could potentially be manipulated to weaken the Church’s moral absolute teaching on homosexuality.

Poland’s Archbishop Stanisław Gądecki expressed what so many Catholics have been thinking for some time in response to Pope Francis’s frequent justifications for “change”, openness to “surprises”, becoming less “rigid”, etc., as justified by a new “tone” of “mercy” by the Church.

“The President of the Polish bishops considers that at the recent Synod “nothing revolutionary happened.” The 1981 exhortation 'Familiaris Consortio', of John Paul II, “had already expounded everything long before that.” What happens is that “everyone has forgotten it, and now there is the impression that the Church has suddenly become merciful, while she wasn't before. That she has become enlightened, and wasn't before.”

“These are all delusions, that are the product of nearsightedness, of the fact that we look at the past two weeks to exclaim: this did not exist before! Instead, all this already existed. The impression cannot be given that for two millennia there had been no mercy in the Church, that mercy now shows up unexpectedly. Mercy makes sense if it is related to truth,” Archbishop Stanisław Gądecki declared to Polish state radio. [Source, in Italian]”

Do you sense, as I do, that under the current papacy, the prolific teachings of Popes Saint John-Paul II and Benedict XVI on the moral issues have been almost totally set aside and that they are now considered irrelevant? How can this possibly have happened?

The issuance of Humanae Vitae was by far the greatest act of Paul VI related to family life, except for those who see it as having been a “mistake” (Bishop Bonny of Antwerp) possibly made by “Pharisees”, “afraid of new things” (words from Francis’s homily) and who do not “respond courageously to whatever new challenges come our way” and are not open to new “surprises” from God.

Francis proclaimed Paul VI’s “humble and prophetic witness of love for Christ and his Church!”, not in relation to the great Humanae Vitae encyclical which has proven to be one of the most prophetic Church documents of all time, but rather in reference to the words with which he established the Synod of Bishops: “by carefully surveying the signs of the times, we are making every effort to adapt ways and methods… to the growing needs of our time and the changing conditions of society”.

In my mind and many others, Humanae Vitae recognized and responded to the signs of the times in an extraordinarily profound way that sadly most Christians and even most bishops and Cardinals in the Church have still not awakened to.

As Father Daniel McCaffrey stated in my interview with him a few weeks ago, “It is going to be a very cold, dark winter” for the Catholic Church unless the Synod addresses the great failure since 1968 of the Church to preach the Church's sexual teachings which have been all but ignored for the past 50 years in most dioceses and parishes.