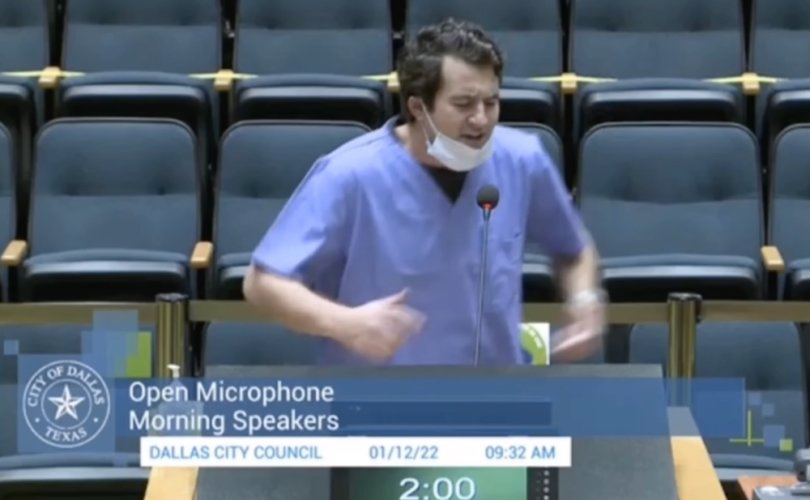 He has satirically advocated for vaccine mandates, called for the assassination of Vladimir Putin (“You got that sanitizer / And you know I got that Pfizer / You know I stick it in my vein / Put a bullet in Putin’s brain”), and explained his daughter identifies as a lizard (she needs a heated glass box in her classroom).

Stein’s raps and speeches are sometimes off-color. It’s a little difficult to discern what he actually believes. And his performances are not always “family-friendly.”

But a recent appearance before the Plano, Texas City Council highlights an emerging phenomenon: comedians are some of the only ones right now who will point out obvious truths, i.e. that men competing in women’s sports, even if they are taking female hormones, have an unfair advantage.

“Does this look like an unfair advantage to y’all?” Stein asked, twirling his obviously male body in a women’s one-piece swimsuit. “Clearly, I look like a biological woman!…I’m on so much hormone therapy I don’t even know left or right anymore!”

“I want you guys to wake up…tell the City of Plano Swim League to let me compete against the ladies. I’ve been on hormone blockers for nearly two weeks now. And like I said, I’m so messed up from them I’m probably gonna lose anyway. But I can send that tape to a college and I might get a scholarship!”

“I’m standing up for women’s rights!”

JP Sears is another YouTuber who has used his platform – and humor – to amplify the truth.

He, too, made a video about being the “best female swimmer in the world”:

And Sears’ videos on mandating life jackets and mandating “booster” life jackets are hilarious and on-point. His satire is cleverly done to avoid the ire of Big Tech censors.

Meanwhile, his video “BOMBSHELL Safety Data Released on ‘Life Jackets’” is a not-so-subtle way to shine a light on the data Pfizer and the federal government were forced to reveal about the Pfizer coronavirus injections – data they unsuccessfully tried to keep hidden from the public until 2076.

A few comedians are pointing out absurdities of COVID hysteria, logical ends of transgenderism

As British comedian Andrew Lawrence put it, “If you’re a good comic, you go for what’s difficult…what’s the one thing where there’s jeopardy in me making jokes about it?…if you tackle that subject that could ruin you, and you get it right, the reaction…the whole room explodes, laughter, people doubled over with laughter.”

And if a comedian got it wrong 10 years ago, the rest of his gig might bomb, but he moved onto the next one. Now, “it could be your whole career over, it could be, as a comedian. The risk-reward is much greater.” (Lawrence himself saw this pan out when he was accused of racism for something he tweeted and subsequently was dropped by his agent and had all of his live gigs cancelled.)

It is absurd that a man can now declare himself a woman and demand to use women’s showers and locker rooms and compete in their athletic events. The gaslighting surrounding COVID vaccines is similarly absurd. It is so ridiculous it’s a wonder anyone falls for it.

And it seems many people realize this privately, which is why Stein and Sears’ antics resonate so widely. A few brave comedians, however off-color or raunchy some of their jokes may be, are finally pointing out some of these absurdities of modern life – and hopefully normalizing standing up to them.