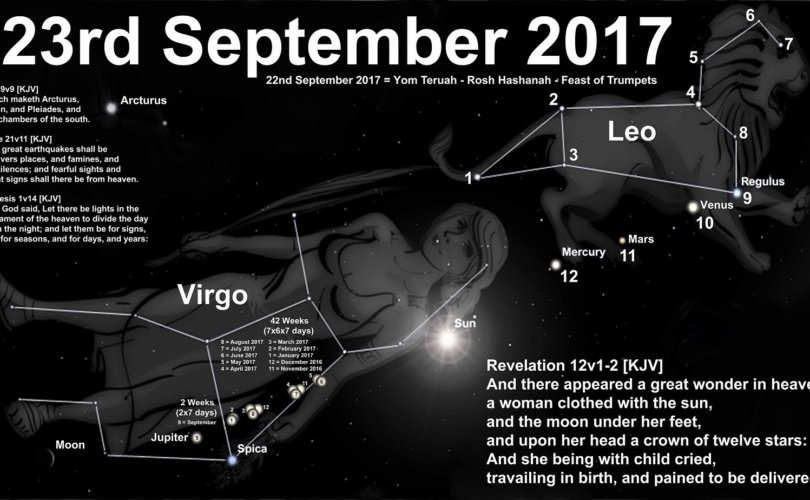 Last year Patrick Archbold at the Remnant wrote a fascinating article which details celestial events beginning on the close of the year of mercy today. The following are the pertinent parts of his article published in October 2015.

On November 20, 2016, an astronomical event begins that will last nine and a half months, culminating in startling concurrence with the vision of Revelation 12.

“And a great sign appeared in heaven: A woman clothed with the sun, and the moon under her feet, and on her head a crown of twelve stars: And being with child, she cried travailing in birth, and was in pain to be delivered.”

The author of Revelation clearly indicates that this vision is one of a sign in heaven or in the sky.

While I am not an astronomer, all my research indicates that this astronomical event, in all its particulars, is unique in the history of man.

On November 20, 2016, Jupiter (the King planet) enters into the body (womb) of the constellation Virgo (the virgin).   Jupiter, due its retrograde motion, will spend the next 9 ½ months within the womb of Virgo. This length of time corresponds with gestation period of a normal late-term baby.

After 9 ½ months, Jupiter exits out of the womb of Virgo. Upon Jupiter’s exit (birth), on September 23, 2017, we see the constellation Virgo with the sun rise directly behind it (the woman clothed with the sun). At the feet of Virgo, we find the moon. And upon her head we find a crown of twelve stars, formed by the usual nine stars of the constellation Leo with the addition of the planets Mercury, Venus, and Mars.

That is a truly remarkable and, as far as I can determine, unique series of event with a startling degree of concurrence with the vision of Revelation 12.

So what does it mean, if anything? The obvious and truthful answer is that we simply do not know. That said, we are not entirely without possible context.

It just so happens that these events transpire during the 100th anniversary of the apparitions of “the woman clothed in the sun,” Our Lady at Fatima in 1917. The culmination of these astronomical events occurs just 3 weeks before the 100th anniversary of the great miracle of Fatima, in which the sun “danced” (another heavenly sign), an event that was witnessed by many thousands.

In the almost century that has followed that great event, we have seen Our Lady’s warnings come true with startling precision. People did not cease offending God and we have seen terrible wars, nations annihilated, and Russia spread her errors throughout the world and, if we are honest, even into the Church itself. And yet, we still await the fulfillment of her promises, the triumph of Her Immaculate Heart, and a period of peace to be granted to the world.

For the full article see the Remnant here.