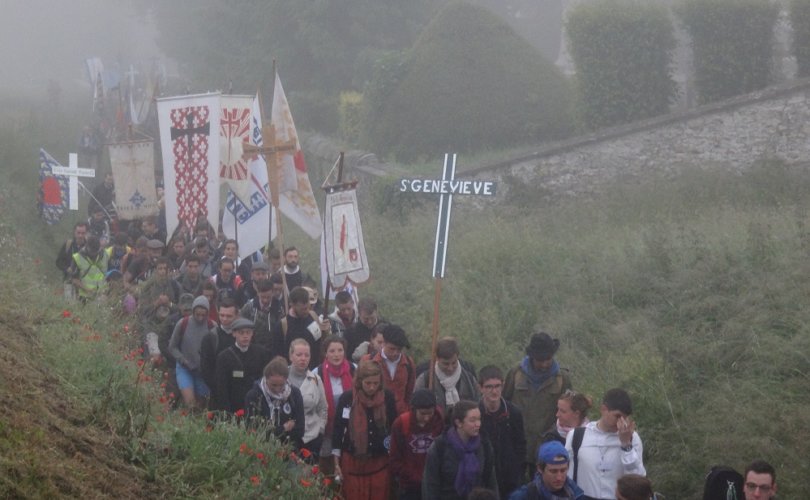 CHARTRES, France, June 12, 2019 (LifeSiteNews) ― Every year, thousands of Catholics who love the traditional form of the Latin Mass walk on foot from Paris to Chartres between the Vigil of Pentecost and Pentecost Monday. This year, I was among them again.

For 37 years, Catholics from France and, increasingly, other countries have taken the difficult journey. Divided into “chapters,” they usually follow a 70-mile route from the cathedral of Notre Dame de Paris to the cathedral of Notre Dame de Chartres.The “Pilgrimage of Christendom” is  organized annually by the society of Notre-Dame de Chrétienté.

This year, 14,000 pilgrims met outside the Church of Saint-Sulpice instead because of the extensive fire damage to Notre Dame de Paris. Saint-Sulpice also fell victim to a mysterious fire earlier this year but was less badly damaged.

My own Scottish-led chapter, “Our Lady of Aberdeen,” was not one of the groups admitted into Saint-Sulpice, but stood outside in the front courtyard with thousands more. We followed Saturday morning’s Pentecost Vigil Mass with microphones and an enormous screen set up outside.

Each pilgrim was given a fat “pilgrim’s booklet” on his way to the church, which contained meditations on the themes of the pilgrimage, the propers (readings and specific prayers) of the three Masses of the Pilgrimage, the ordinary of the Mass, and a host of prayers and hymns. These were all in French, but the propers and ordinary were also in Latin. The pavement was rather hard on the knees, so I was glad I had brought a piece of rubber mat as a kneeler and could employ my booklet for its proper use.

I was not always so comfortable, and indeed, I was not meant to be. The Chartres Pilgrimage, although celebratory, is also deeply penitential in nature. It is also a form of radical poverty: for three days, over ten thousand people, mostly young but many middle-aged and elderly, walk at a blistering pace under the broiling sun or the pouring rain, ordered to rest and eat, ordered to walk again. The Knights of Malta supply wonderful first aid stations every few miles, but the medics won’t treat blisters, because everybody gets blisters. The pilgrims queue for the portable toilets, run to catch up with vanished chapters, and finally at night are ushered into the campground, where, for most of the French ― and all of the foreign ― pilgrims, crowded communal tents await.

You can have a shower if you’re willing to walk as far as the showers ― but you’re too tired. You can have a cup of soup ― but only  if you happen to have a cup with you when you trudge past the soup table. You get to bed as soon as you can ― which is always later than I wish ― because at 5 A.M., a recording of “Pie Jesu” will blast over the massive camp. A French voice will begin shouting instructions in French, English, Italian, and German: “Good morning, dear pilgrim friends. You begin leaving at 6 A.M. Hurry up.”

Every chapter must leave camp when its name is called. Sometimes the chapter captain is not informed when this is until mere minutes before. On Pentecost Monday, my chapter was bumped up from 82nd place to third. I heard our marching orders when I was still rolling up my tent.

Ah, my tent. My chapter captain doesn’t want anyone to know about my tent, but as usual with LifeSiteNews, the truth must come out. I had brought a small tent with me on my first pilgrimage, three years ago, and it was my greatest comfort.  I was thus disappointed to hear very early on Saturday morning, as I waited with other pilgrims to get my ID bracelet and to put my night baggage onto the foreigners’ luggage truck, that foreigners’ tents had been banned. Thanks to a steady increase in the number of foreign pilgrims, there was no longer enough room to accommodate our personal tents in the campgrounds. (According to French media reports, at least 1,200 “étrangers” took part this year.)

We discovered on Saturday night that there was no longer enough room for everyone even in the communal tent assigned to the women of “Our Lady of Aberdeen” chapter. Thus, I slipped away and found a flat place to put up my personal tent, ceding my space in the communal tent to a beaming Australian.

On Sunday morning, I did my best to pack up and roll up my tent before “Our Lady of Aberdeen” was sent back onto the route, but I was stalled behind dozens of other foreigners queued up behind our baggage truck. I had to hurry past a long column of French, German, Dutch, Polish, American, and Welsh pilgrims before I found my group again. Walking over 20 miles a day for two days (and about 15 miles the last day) was hard enough without having to hurry through wet, tick-infested forests and fields, but that is what I had to do.

“Why am I here?” I scrawled in my notebook at 11 P.M. on Sunday. At about 5:30 P.M., I had joined the growing number of pilgrims who couldn’t walk any more that day and had to be shuttled by bus or car to the campground after a three-hour wait in a churchyard — a great mortification of my pride. My feelings about the pilgrimage veered between liking it and hating it, which is also how I feel about reporting on the scandals that are so badly hurting the Church.

I did not know this until Pentecost Tuesday, but I was on the pilgrimage to confront spiritually both my work for LifeSiteNews and my faith as a Catholic. Before I left for France, I was deeply shaken by two things I had recently had to do. The first was to ask a famous composer whose works I happily sang at my theological college if he still believed Catholic doctrine about sexuality, marriage, and the family. The second was to ask a bishop who had been accused of sexual and financial impropriety by the Washington Post how he felt about it. When I was a child, talking about homosexuality was taboo, and I was so much in awe of bishops that I never dared to approach my own. Now I ask famous strangers if they are closet LGBT activists and successors of the apostles if it’s true they’ve molested seminarians.

When I first began to suspect that this ambivalence was why I was on the pilgrimage, I decided to talk to a clergyman about it. An English-speaking seminarian had been sent to minister to our group on Sunday afternoon, so I consulted him. Hesitantly, he acknowledged that writing about the sins of others ― that is, of clergy ― is a serious thing.

My worry about the ethics around saying “bad things” is not about clergy, but about people in general, but the seminarian’s old-school response helped me understand why my job, though stressful and heartbreaking, is important.

The next day, as the spires of Chartres Cathedral were almost visible on the horizon, I talked in a roadway confession to a seasoned priest about work. He was comforting as well as helpful, and I felt a lot better.

The greatest joy of the Chartres Pilgrimage is the wonderful Pentecost Monday Mass in Chartres Cathedral. There is always some heroic bishop there to give an inspiring homily, and the ceremonies and music are glorious. This Mass really is, in the words of Fr. Faber, founder of England’s Brompton Oratory, the “most beautiful thing this side of Heaven.” Wonderfully, the “Our Lady of Aberdeen” chapter was assigned pews relatively near the front of the central nave, so we could see everything this year, including the gestures of Belgian Archbishop Emeritus André-Joseph Léonard as he thundered that despite all the sinful people in it, “the Church is holy.”

“The Church is holy!” he repeated.

Mass ended with the assembled thousands, both inside and outside the great Gothic cathedral, singing “Christus Vincit” as one and then, with differing accents, the Chartres pilgrim’s sweetest hymn to the Mother of God: “Chez Nous, Soyez Reine.” I cannot hear this last without wanting to weep, and sure enough, tears poured down my face.

Be the Madonna
Whom we beseech on our knees
Who smiles and forgives
In our home, in our home.