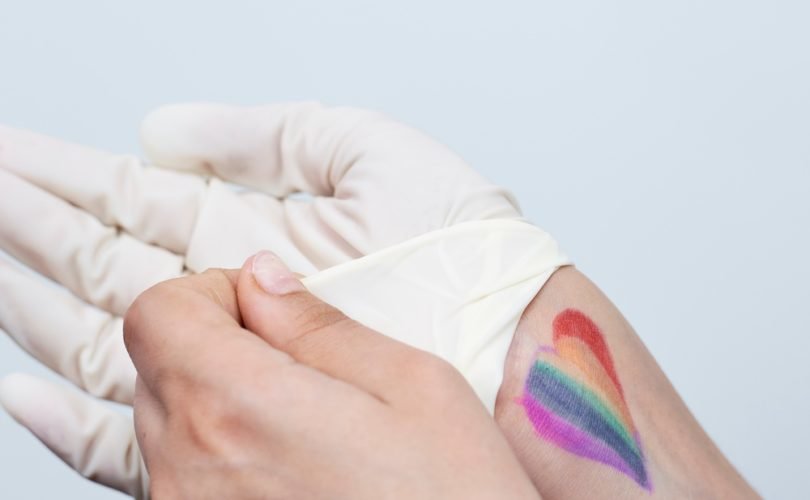 June 30, 2021 (LifeSiteNews) – As the transgender movement pushes the transformation of society, very few fields have been left untouched. The medical field, however, has faced the greatest number of challenges. Trans activists are demanding accommodation far beyond “transition” – or “gender affirmation surgery,” as they prefer it. Language is as important to trans activists as treatments. Verbal recognition of their chosen identities is the social affirmation they crave, which is why we’ve seen the media, politicians, academics, and celebrities obediently fall into line and people’s “preferred pronouns” pop up on social media like mushrooms after rain.

As such, Brooklyn-based freelance writer James Factora, who goes by the pronouns “they/them” (and thus presumably identifies as “non-binary”) and has contributed to publications such as VICE and Teen Vogue, has written “A Guide to Primary Care for Transgender Patients” for a publication called The Paper Gown. The Paper Gown is produced by ZocDoc, which is an online doctor appointment scheduling service.

Trans patients, Factora writes, are likely to face discrimination and thus need to “establish relationships with trans-affirming doctors” who can go beyond simply prescribing hormones and ushering the patient along on the path to transition.

As you might have guessed, “trans-affirming doctors” are doctors who know “the vocabulary to properly discuss their gender identity.” As the trans culture wars increasingly play out on the battlefield of language, how one speaks is of the essence. Factora, unsurprisingly, recommends Planned Parenthood, which has become America’s second-largest supplier of hormones to people struggling with their gender identity.

There have been many issues in the past several years where someone’s sex makes a real difference to the care they are provided, as there are distinct differences between male and female bodies – including a tragic incident in which a baby died because a pregnant woman presenting as male was misdiagnosed as an obese man. But Factora notes that while someone’s “assigned sex at birth” can be “relevant to … primary care needs,” approaching this issue is a difficult one. An excerpt:

While this can be an uncomfortable topic for many trans people, Goldstein says that providers often “use the question of sex assigned at birth” as shorthand for asking what organs you have.

In other words, Kumar says, when it comes to primary care, physicians are “really thinking about the organ system that’s involved,” whether that’s the cardiovascular system, reproductive system or whatever else might need attention. “There are some parts of your body that are going to be affected by hormones or surgery,” he says. “Some of those things may vary person to person, so it’s important for your provider to know what body parts you have or don’t have.”

Biological females who identify as male, for example, should still “be screened regularly for breast or chest cancer,” but “there’s not much data on screening for cancer in transitioning people.” Unspoken is the fact that this is because the wave of people identifying as transgender is very recent, as is the exploding number of people taking hormone therapy and embarking on sex changes. This is very much a medical experiment on a social scale, and we know almost nothing about what the long-term effects are.

Factora implicitly admits as much, quoting one expert as saying that “you have to keep track of what parts are there and what parts aren’t. If the parts are still in your body, then you have to screen them.” He also notes that “estrogen can increase your risk of getting lung cancer and blood clots,” which is not something he’ll hear many trans activists admitting as they insist these treatments are life-saving. There are also sometimes issues with “tucking,” which refers to the process of hiding the penis between the legs in order to better “pass” as female:

Kumar says that when tucking habits are causing an increased amount of pain, itching, redness or other skin changes, it can be a cause for concern. “Exploring some of those alternatives can be helpful,” he says. “If there’s breaks that folks can take, perhaps at nighttime or when they’re not out, if that’s comfortable for them, that’s something that can help the skin breathe.” If you have had bottom surgery, Estvold recommends pursuing gynecological care six months to a year after surgery. Goldstein recommends a visual examination of the vagina once a year to check for skin cancer, regardless of what tissues were used in the surgery.

“All of those techniques are so new that we don’t know if there are any implications for health screenings,” she says. “No matter how the vagina was constructed, the visual [examination] is really the most important.”

In short: In turns out that attempting to “reconstruct your body” has real-world implications. Sex change surgeries don’t actually change your sex, they just turn you into a life-long medical patient. Females identifying as male who practice “binding” – wearing a chest wrap to flatten the breasts and pass as male – need to be monitored as this practice can be very physically damaging.

Testosterone can increase your red blood cell count, which can heighten your risk for negative health outcomes, including blood clots. Also, some evidence suggests testosterone can alter cholesterol levels. Because of this, Estvold tests his transmasculine patients’ blood to make sure their levels are within the normal range, while also encouraging healthy lifestyle choices to reduce the risks of cholesterol problems.

In other words, transition comes with all sorts of risks that the mainstream media almost entirely ignores in its coverage of the issue. Authors and academics who bring up these risks are invariably accused of being transphobes, but the reality is that these are tremendously dangerous procedures.

But by far the most disturbing part of all of this has to do with sex. Read on at your own risk – I include this excerpt here only to highlight how brutal and extensive the surgical destruction really is:

“I think trans folks should be forthcoming with their medical providers about how they’re having sex,” says Goldstein. While she didn’t always ask patients how they prefer to have sex, it’s something she always asks now when patients are starting hormones. “For people who are on feminizing regimens, we dose the medications a little bit differently if they still want to be able to get an erection,” she says. “So it has all sorts of implications for care.”

If you’re a trans woman who’s had bottom surgery and has vaginal sex, Estvold says, “It’s important to make sure that the vaginal tissue is still healthy, and not dried out or infected in any sort of way, especially if you’re using your new vagina for penetration and sexual intercourse.”

As for trans men, testosterone can cause what is clinically referred to as vaginal atrophy. However, Goldstein likes to avoid this alienating language, and describes the phenomenon as akin to “symptoms of a UTI, like burning and irritation, without any bacteria in the urine.” If you’re a transmasculine person who has receptive sex in his front hole, Kumar recommends using water or silicone-based lubricant. This can also be remedied with topical estrogen applied locally, which can come in the form of creams, gels or tablets that can be inserted with an applicator.

Women getting erections? Men having a “front hole”? This is a movement driven by mental illness and mutilation, and young people are signing up for it in droves. We must keep this ideology away from our children and out of our schools – the damage that it inflicts on young people is incalculable and irreversible.

For people interested in learning more about this movement in order to understand it better, I wrote an article listing four books that will assist you in that. I’ve also had a number of excellent guests on my LifeSiteNews podcast, including Abigail Shrier, the author of Irreversible Damage: The Transgender Craze Seducing Our Daughters. I wish that articles like this one weren’t necessary, but the reality is that these people are no longer fringe. Governments are marching to their tune, and the time to educate ourselves and resist is now.