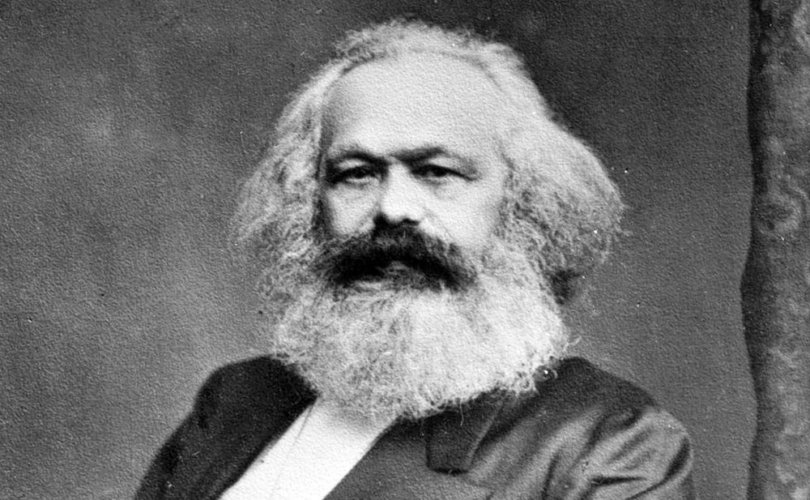 November 20, 2018 (LifeSiteNews) – Karl Marx, father of Communism, was born 200 years ago (as of this past May 5). Between 1835 and 1843, that is to say, between the ages of 17 and 25, he wrote a great deal of lyric poetry and humorous doggerel, which might be rather surprising to those who know only the “mature Marx” of Das Kapital, his famous critique of capitalism, which consists of hundreds of pages of ponderous and rather dull prose. The poetry is published in the very first volume of the Collected Works of Karl Marx and Friedrich Engels, published by International Publishers in New York.

For example, there are sonnets to Jenny von Westphalen, who was to become Marx’s wife and the mother of seven children, which include such lines as:

See! I could a thousand volumes fill,
Writing only “Jenny” in each line,
Still they would a world of thought conceal,
Deed eternal and unchanging will,
Verses sweet that yearning gently still,
All the glow and all the aether’s shine,
Anguished sorrow’s pain and joy divine,
All of life and knowledge that is mine.
I can read it in the stars up yonder,
From the Zephyr it comes back to me,
From the being of the wild waves’ thunder,
Truly, I would write it down as a refrain
For the coming centuries to see—
Love is Jenny, Jenny is love’s name.  (p. 522)

One may charitably imagine that the verses read more compellingly in their original German. One may also wish that Marx had confined himself to writing “a thousand volumes” of romantic poetry rather than Das Kapital, and that his Jenny had occupied so much of his time that he had none to spare for Engels.

But more volatile feelings were soon to emerge in his youthful verse, with a Luciferian twist:

I am caught in endless strife,
Endless ferment, endless dream;
I cannot conform to life,
Will not travel with the stream.

Heaven I would comprehend,
I would draw the world to me;
Loving, hating, I intend
That my star shine brilliantly. […]

Worlds I would destroy for ever,
Since I can create no world,
Since my call they notice never,
Coursing dumb in magic whirl. […]

So the spirits go their way
Till they are consumed outright,
Till their lords and masters they
Totally annihilate.  (p. 525–26)

These verses radiate the nihilistic force of one who would destroy if he cannot create ex nihilo. If creation is unavailable to men, what about manipulation by dark forces? With surprising regularity, Marx uses the language of magic and demonology. For example:

Ha! In nerve and spirit I was stricken
To the bottom of my soul,
As a demon, when the high magician
Strikes with lightning bolt and spell.  (p. 524)

Or in another poem:

With magic power and word
I cast what spells I knew,
But forth the waves still roared,
Till they were gone from view. […]

Throughout his verse, Marx finds dozens of ways to depict his protagonist or himself as locked in combat with “the gods”—with theism, Christianity, natural order. (It perhaps will come as no surprise that he projected a thesis summarizing and comparing the natural philosophy of Democritus and Epicurus, two ancient materialists.) Here is a particularly fine example:

So a god has snatched from me my all
In the curse and rack of destiny.
All his worlds are gone beyond recall!
Nothing but revenge is left to me! […]

I shall build my throne high overhead,
Cold, tremendous shall its summit be.
For its bulwark—superstitious dread,
For its Marshall—blackest agony. […]

And the Almighty’s lightning shall rebound
From that massive iron giant.
If he bring my walls and towers down,
Eternity shall raise them up, defiant.  (pp. 563–64)

Can anyone reading these lines not be reminded of the Lucifer who says, Non serviam – “I will not serve!” – and who works tirelessly over the vast sweep of world history to lead astray all who are foolish enough to serve the unservant? Can anyone read these lines and not think of Stalin’s Soviet empire, with its millions put to death and its Siberian gulags, ruling over men with “superstitious dread” and “blackest agony”? In the realm of fiction these lines call to mind Tolkien’s Mordor, Sauron, and Melkor, or Weston as the “Unman” in Lewis’s Perelandra.

Of Marx’s early poetry, the most disconcerting (at least that I have discovered so far) is one entitled “The Fiddler,” written in 1837 and published in 1841:

The Fiddler saws the strings,
His light brown hair he tosses and flings.
He carries a sabre at his side,
He wears a pleated habit wide.

“Fiddler, why that frantic sound?
Why do you gaze so wildly round?
Why leaps your blood, like the surging sea?
What drives your bow so desperately?”

“Why do I fiddle? Or the wild waves roar?
That they might pound the rocky shore,
That eye be blinded, that bosom swell,
That Soul’s cry carry down to Hell.”

“Fiddler, with scorn you rend your heart.
A radiant God lent you your art,
To dazzle with waves of melody,
To soar to the star-dance in the sky.”

“How so! I plunge, plunge without fail
My blood-black sabre into your soul.
That art God neither wants nor wists,
It leaps to the brain from Hell’s black mists.

“Till heart’s bewitched, till senses reel:
With Satan I have struck my deal.
He chalks the signs, beats time for me,
I play the death march fast and free.”  (p. 23)

The Fiddler is Marx holding a mirror up to himself: the supreme ideologue of atheistic Communism, who – in spite of a boasted disbelief in the supernatural or the spiritual – struck his deal with Satan, and danced to his atonal tune, his “techno” beat, “an art that God neither wants nor wists.”

The downfall of Soviet communism and the softening of communist regimes across the globe should not blind us to the fact that Marxist philosophy is alive, if not well. We see it lingering even in Catholic circles that tend towards socialism, progressivism, and doctrinal revisionism à la Hegel. We see it in the Vatican, to be sure, whose willingness to strike a deal with Communist China is an insult to Almighty God and a bitter betrayal of faithful Chinese Catholics, much as was Paul VI’s Ostpolitik decades earlier.

The spirit of Marxist ideology will not be easily exorcised, as it is but one of countless manifestations of the spirit of defiance and despair that vainly but energetically contests the Kingdom of God.