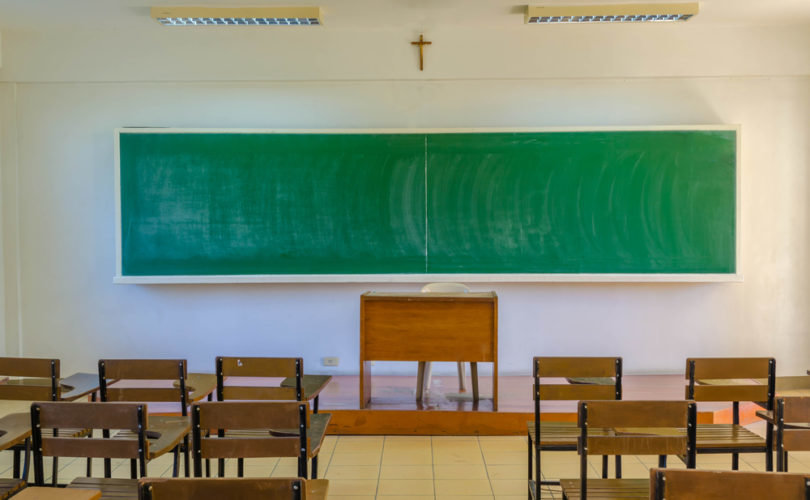 April 5, 2019 (LifeSiteNews) — A friend of mine was invited to pick over the books of a convent which was about to be closed, in Gloucestershire, England. Among other things she discovered an old 12-page booklet of the diocese’s Syllabus of Religious Instruction, covering, in a summary fashion, nine school years, from ‘Infants’ to the final year of school. It bears the name of Bishop William Lee, who led the diocese from 1931 to his death in 1948, and is a fascinating glimpse into the past. You can see it here.

For the bishops of Britain, as for the bishops of the United States, Catholic schools were a high priority. Our bishops had had to start more or less from scratch, in terms of Catholic institutions, as the Faith was given legal toleration in stages in the course of the 19th century. They regarded it as intolerable that Catholic children would have to be taught by non-Catholics, particularly, of course, on the subject of religion. But what were these Catholic schools to teach the children in their charge?

The stereotype of old-style Catholic education is that it was all rote learning from a catechism. As a glance at this syllabus shows, that is far from being the case. On the contrary, the syllabus is remarkable for the breadth of what it includes under ‘Religious Instruction’. Certainly, the catechism is there: it refers to two books in use in Catholic schools, an Infant’s Catechism and the Graduated Scheme, the latter apparently giving detailed information on doctrine.

But in addition to this, every year’s syllabus has sections on Prayers to be taught, and on History. In the early years the latter comprises biblical history, and, contrary to Protestant accusations, clearly the children of Clifton Diocese were taken through the entire Bible in the course of their education. Later years cover the history of the Church, in stages up to 1920 — at the time of publication, more or less the present day — to be coordinated with the study of secular history and illustrated by the lives of the Saints.

In addition to the learning of prayers, the children were to be taught popular hymns and Gregorian chant. The ‘Catechism’ and ‘Instruction’ elements of the syllabus covered the history of the Mass, the liturgical seasons, and the Sacraments.

It is impossible to tell from this document how many hours were devoted to Religious Instruction, and how detailed the instruction was. Nevertheless, it is clear that the pupils of non-elite, parochial schools were expected to be able, by the end of their courses, to have some idea of the sweep of history from Abraham to the Russian Revolution, to be able to discuss the Church’s social teaching, to have read the latest papal encyclicals, and — for the more advanced pupils — to be able to sing the complex Gregorian Chant ‘propers’ for major feasts.

The typical pupil at the eve of departing a Catholic school in England today would probably not know what Gregorian Chant is, and is extremely unlikely ever to have read a papal encyclical. Religious instruction in Catholic schools has, in fact, improved somewhat in recent years, but it is narrowly focused on doctrine, with a particularly shocking neglect of Church history. The stereotype of the past is actually more true of the present.

The coordinated approach of this old syllabus is something which could in general be attempted today only by those educating their children at home. For there is a difficulty with most Catholic schools which improving Religious Instruction classes (whatever they might be called) cannot address alone: it is a lack of coordination with other school subjects such as music and history, and a failure to connect the inculcation of theological knowledge with the spiritual life. It is not just a matter of having prayers at morning Assembly and crucifixes in the classroom, important as these are: it is a matter of making sure that the children know how to make the sign of the cross, say the rosary and the angelus, and have some idea of what is going on during Mass.

I have no doubt that good Catholic teachers do their best to teach this kind of thing in Catholic infant-schools. But unless they are practiced in the context of a school and home culture which reinforces and nurtures the practice of the Faith, they will be long forgotten by the time the children leave school.

I don’t entirely blame the schools, the best of which battle to convey the Catholic spirit to children whose parents may well not practice, and may be living contrary to the teaching of the Church. Nor do I necessarily blame parents, the best of whom often find themselves in permanent conflict not only with the school, but, even more intractably, with the culture of the peer-group. A good school needs good Catholic families, and good Catholic families need good Catholic schools.

For many, the only way to escape this chicken-and-egg problem is to unite family and school, and teach one’s children at home.