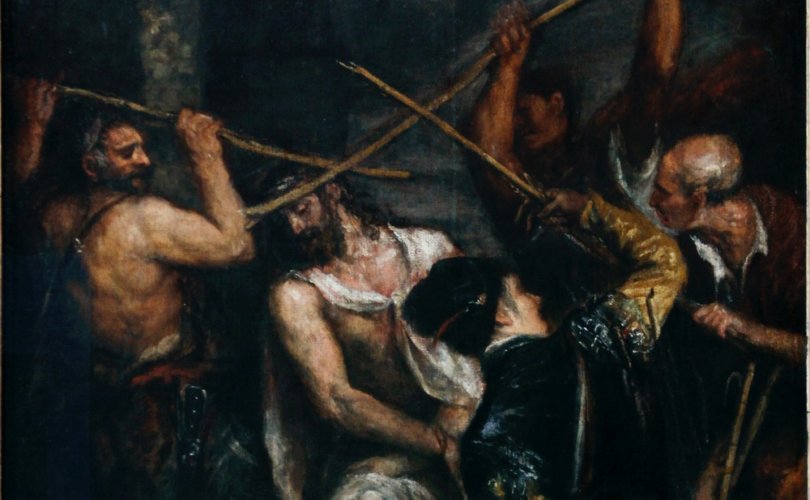 August 21, 2018 (LifeSiteNews) – The great Venetian artist Titian (Tiziano Vecellio, c. 1488–1576) painted this haunting depiction of the crowning of Our Lord with thorns at the very end of his life and long career. It is one of several intensely-felt religious paintings of the final decade that suggest a man taking stock of his life, looking into his soul, seeing past the gaudy surface of things into their hidden meaning.

In this case, we need not merely speculate about the shift in consciousness, since we have a similar painting from 1542–1543, that is, over 30 years earlier, and the difference between them is striking. The earlier depiction of the scene shows a Christ writhing and struggling, located in a niche below a bust of the emperor Tiberius Caesar, with a glaring light shining on the violent actors. The warm colors of red, orange, and peach predominate, bringing us closer to the blood and sweat.

This late painting, in contrast, shows a Christ patiently resigned, accepting all suffering, absorbing it into His divine Heart, at once the Victim and the Master. Instead of a bust of Caesar, there is a ghostly lamp of many prongs, which looks like some strange monstrous creature, a phosphorescent spider, or perhaps a demonic parody of the tongues of fire that came from heaven on the day of Pentecost. In the midst of the Passion, we are still far from the exuberant joy and explosive energy of that day. Patches of white and gold stand out against the otherwise dominating gray and black background.

Instead of the radiant dawn of Easter, the atmosphere visible through the archway is sunk in gloom, with sinuous gray clouds outlining the almost faceless brute in the back who administers the torture in league with several other almost faceless brutes. In the earlier painting the giant stones of the architecture are carefully chiseled and displayed with artistic bravura. Here in the late version, the stones have faded into menacing bulks that give the scene a horrible air of permanence, as if this torture had always been going on and will never end.

Two soldiers ply their vile trade as, with heavy sticks, they push down the thorns into the Savior’s head, as if they would crack his skull, or crush it, as in our day medical mercenaries crush the skulls of infants. The painter is careful to accentuate the enormous knife hanging from the belt of the soldier on the left (a detail missing in the earlier version).

Yet this “sacred head surrounded by crown of piercing thorn” is—in all the torment thrust upon Him, in all the weight of sin that burdens Him far more than physical wounds—the only one who is free. He suffered because it was His own will, as Scripture says, and we see this brought out by Titian in the Lord’s forward tilting to welcome the pressure, His upright posture, His legs positioned as if He could stand and walk but chooses to remain fixed, and the play of light that haloes His body, which presents to us a formidable strength of torso and arms.

Titian, in short, is telling us in the language of a great painter that although the men surrounding Christ are at liberty and He is a prisoner enchained to His place, in reality they are the ones who are slaves—to their higher-ups, their passions, their programs, blind to the King of kings who sits right before them—while He is free with the freedom of unchanging truth, unconquerable patience, and the offering of Himself in sacrifice, for love of sinners. He remains in command, as He was when fast asleep in the hull of the storm-tossed boat. Every martyr in the history of the Church has demonstrated this freedom of self-mastery and self-gift, which none of their tormentors could ever steal from them.

One of the most astonishing touches to the painting is Titian’s redesign of the soldier in the foreground. In the earlier painting he is bare-legged like the others, wearing a chainmail coat but otherwise not remarkable. In the late painting this soldier has suddenly become a kind of military dandy, with a handsome hat, fine shoes and red pants, expensive golden sleeves, and a rich blue jacket. He bears the halberd, a specialized weapon still in use in Titian’s day in the battles fought all over Europe, including those between Protestants and Catholics. Perhaps it is fanciful but I see this figure as a representative of the upper class, of the wealthy and powerful who also wound Christ with their sins—often moreso than the ordinary folk, because of their great influence and the authority they wield. One might see in this figure the contemporary bishop or cardinal who throws himself energetically into the devil’s work.

A last almost grisly touch to this masterpiece is the boy in the lower right corner who, with a disturbing air of innocence, stands there holding a bunch of wooden rods for whomever might need them to inflict further injuries on the Lord. This contributes to the unnerving sense of a series of crownings-with-thorns ready “in the wings” of history until the end of time, when Christ will return in glory to judge the living and the dead, and usher in the kingdom that will have no end.

Why do I choose this painting today? Our Lord continues to suffer, not in His own proper Person but in His Mystical Body, the Church, which is one flesh and one spirit with Him (cf. Acts 9:4, 1 Cor 6:17, Eph 5:29–30). All of our transgressions wounded Him and all of our iniquities bruised Him in His Passion, which continues in the Church whenever she is wounded by the sinful actions of any of her members, especially of her clergy, or bruised by their indifference, lukewarmness, careerism, cronyism, guilty silence and complicity, cowardice, heterodoxy, or contempt for the little ones. Titian vividly sets before us what the whole Christ suffers, inspiring in us dread and hatred for evil, hope and confidence in God. This is a message everyone needs to hear, to see, and to take to heart.