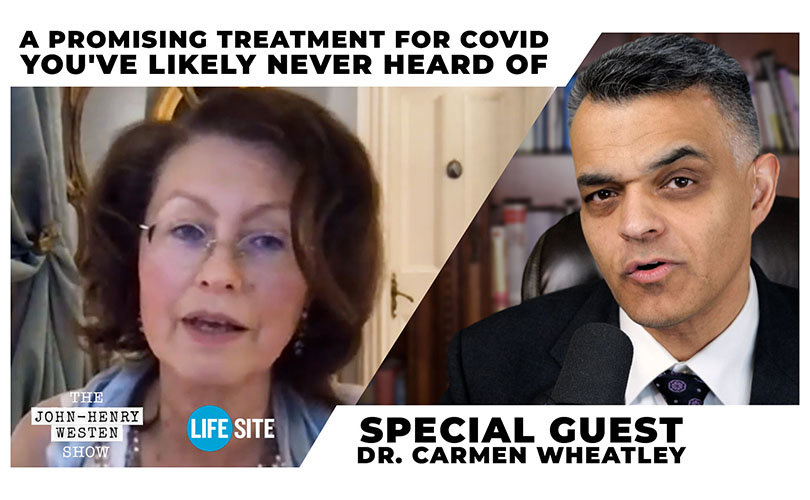 February 24, 2021 (LifeSiteNews) — In this episode of The John Henry Westen Show, Dr. Carmen Wheatley and I sit down for an interesting conversation on a new and potentially effective treatment against the coronavirus.

Dr. Wheatley is the director of a registered U.K. and overseas cancer charity Orthomolecular Oncology, as well as a medical researcher and specialist in cobalamin (vitamin B12), which she says has been shown to be a promising treatment to combat a significant number of illnesses.

She discovered from more than half a century of largely forgotten and overlooked scientific literature that B12 was used not only in patients who had deficiency in the vitamin in their body, but also to treat polio, rheumatoid arthritis, leprosy, cyanide poisoning, episodes of schizophrenia and psychosis, and more. The doctor discovered that cases where IV B12 is used routinely against cyanide poisoning, which have strong parallels to septic shock. This is applicable to acute COVID with the respiratory distress syndrome.

Wheatley tells me that those who die from coronavirus actually die from this septic shock. In sepsis, “you have serial organ failure and very often the liver, the kidneys and the lungs will fail,” which leads to the entire body and immune system being unable to respond to the virus. She conjectured that since vitamin B12 is able to help those patients with cyanide poisoning, even sometimes without them having to enter the ICU, it could also work against COVID.

Besides this parallel in the studies, Dr. Wheatley also highlights some other properties in cobalamin which counter the coronavirus. For example, she mentions that patients with COVID “have very low numbers of what are known as natural killer cells,” and when B12 deficiency/pernicious anaemia patients, and healthy humans are given B12, these cells are boosted. Moreover, the vitamin also is critical for producing antibodies.

Wheatley says that vaccines may not be effective without good cobalamin status, “since a vaccine is only as good as the immune system it challenges.” So, if a person’s immunity is deficient in vitamin B12, a vaccine will be more likely not to prevent any disease, but may be more likely to cause an adverse reaction.

As noted in our interview, doses in over-the counter B12 vitamins will not work to counter the virus due to their low oral absorption and thus low potency, and Wheatley says that even when you take more doses they will not act against COVID, because with B12, paradoxically, the higher the oral dose the less is absorbed.

She does suggest, though, that those who are healthy enough not to go to the hospital “get some liposomal B12 as methylcobalamin, to begin with.” But for more serious cases, higher doses may need to be given through IV or injection either at home or at the hospital, following doctors’ orders. Dr. Wheatley has a trial protocol that she can share with any interested doctor on request.

In answering why the medical system is not promoting COVID cures such as cobalamin, hydroxychloroquine, and ivermectin, Wheatley notes that we are “dominated by the Big Pharma paradigm.” She says that this monopoly of large pharmaceutical companies inside the healthcare industry has led to the bankruptcy of national healthcare systems everywhere. The doctor gives some history of medicine, which demonstrates that often simple cures, such as vitamin B12, can be effective solutions to difficult problems

Dr. Wheatley calls on “doctors … to take courage” and consider trying this treatment for the virus. She also discovered that cobalamin has not only indirect effects to regulate the immune system, but also historically has been shown to have direct antiviral action, not only against COVID — in recent molecular modelling screens — but other viruses: influenza A and B strains, HIV, polio, shingles, chicken pox, the papilloma cervical cancer causing virus. She calls it a “God given … pan-antiviral.”

Lastly, Wheatley states that one of the things which troubles her the most regarding the reaction to COVID-19 was “that governments were not issuing … general common sense [to] boost your immune system.” She says that “governments seem to act as if they own your immune system and that … you’re not safe unless you have treatments [or] vaccines” promoted by Big Pharma.

Dr. Wheatley concludes that people must take individual steps to fortify their own immunity to the disease “by taking B12 in the right form, taking vitamin C, taking [vitamin] D and other things like selenium and zinc,” as well as other herbal and natural antivirals, which have all shown to be effective antiviral treatments and preventive measures.

Dr. Wheatley can be contacted here.