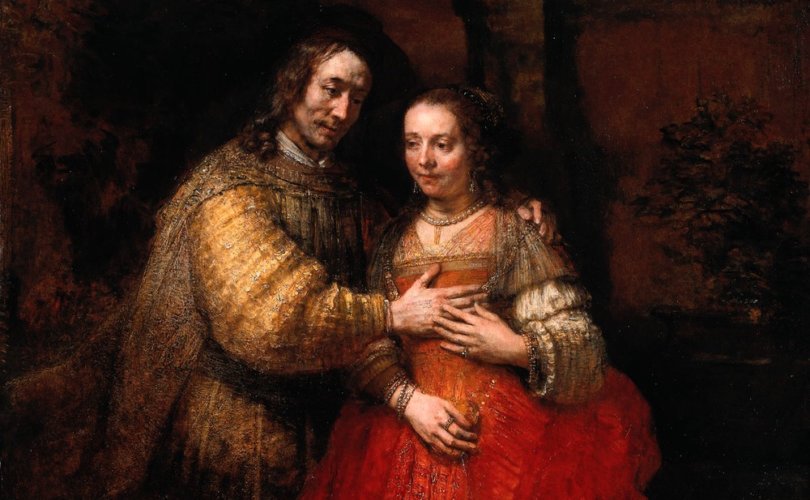 July 3, 2018 (LifeSiteNews) – Many are the great painters, but Rembrandt—whose full name is Rembrandt Harmenszoon van Rijn (1606–1669)—is among the very few who have become household names. This painting of ca. 1667, dubbed “The Jewish Bride” in the 19th century, shows us why he is so admired and popular.

Another famous painter, Vincent Van Gogh, sat before “The Jewish Bride” for several hours. When it was time to go, he said: “I would give ten years of my life if I could sit here for a fortnight with only a crust of dry bread to sustain me.”

Closer examination has revealed that this is a painting of the Biblical characters Isaac and Rebecca (Genesis 26). In a preparatory sketch, Abimelek, king of the Philistines, stands at a window, looking with surprise at the intimacy of Isaac and Rebecca, who were pretending to be brother and sister. Some art historians think it may be a portrait of a real particular couple, posing as Isaac and Rebecca.

The story in Genesis 26 ends with Abimelek saying: “Anyone who harms this man or his wife shall surely be put to death.” As with every story in Genesis, this one too carries the theological weight of being a demonstration of Divine Providence; God is watching over this couple, who have been chosen to be members of the genealogy of the Messiah.

The husband and wife are so deeply united that they don’t need to gaze into each other’s eyes. They are looking elsewhere, possessed of their own thoughts, but there is no doubt in the viewer’s mind that they are united. Their gaze is not the over-eager mutual preoccupation of puppy-dog love, but the trusting interior gaze of a man and woman who have committed their lives, their bodies, their futures, their progeny, to one another, “for keeps,” for better or for worse, for richer or for poorer, in sickness and in health, till death do them part.

The man’s sleeve (what a magnificent sleeve of shimmering gold!) leads to the hands joined together, his right hand gently on her bosom, her left hand softly covering his. There is a combination here of great strength and immense tenderness that makes one feel the rightness of this relationship, the permanence of affection in spite of trial and hardship. The other two hands—his left, circled around her shoulder, and her right, resting peacefully on her bosom, suggest protection, stability, and, discreetly, modestly, hopefully, the promise of children in the womb. The parallelism of the male and female hands, which seem to echo one another, lends balance and rhythm to the composition, in keeping with Rembrandt’s impeccable sense of order in motion.

A definite hierarchy is portrayed, whereby the man is over the woman as her head (the man is literally taller than his bride, larger, stronger); and yet his headship takes the form of a kindly inclination towards her, obviously seeking her good, and in awe of her dignity and beauty, of which he is unworthy, even if God has placed him in charge of her. It is as if his very touch is reverent and respectful, not voracious, presumptuous, or rough.

The colors of gold and red suggest kingliness, majesty, riches. They are wearing their brightest and best. But gold is valuable in the eye of the beholder, and red is the color of blood. He is valuable because she values him in her heart. He is ready to bestow what he can upon her, in body and soul, and she is ready to make sacrifices for his sake and for the family he will beget with her.

All this, and far more, Rembrandt magically and masterfully portrays, all from the tip of his brush dipped in oil paints, guided by a heart that has known love, tragedy, remorse, success, and struggle. We see in his work realism taken to another level. It is poetic realism, whereby what is seen on the outside is a manifestation of the inner reality of the characters in their relationship. Their souls are more real than their bodies, their souls give life and meaning to their bodies, and yet we see all this only through their physical appearance. From this painting it is but a single step to John Paul II’s Theology of the Body.

“The Jewish Bride” is today in the Rijksmuseum in Amsterdam, which also contains masterpieces by Vermeer, whose work we will take a look at in time to come.