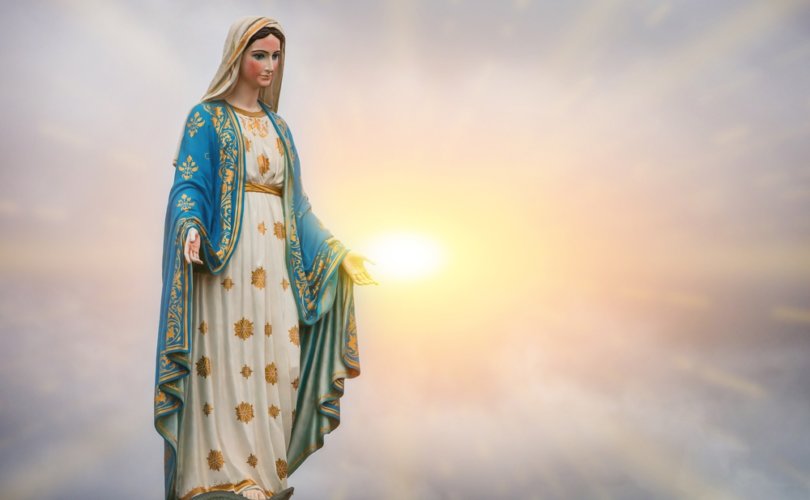 December 23, 2017 (LifeSiteNews) – The Magnificat is the song of joy and adoration: joy, because Mary looks upon the salvation wrought by God as it is unfolding, and rejoices in the immense mercy He is granting the human race; and adoration, because she can only fall down in worship before the power and faithfulness of the God of Israel. Mary realizes her vocation: “My soul magnifies the Lord, and my spirit rejoices in God my saviour, for he has regarded the low estate of his handmaiden … for He who is mighty has done great things for me.” She possesses great humility before the magnitude of her own vocation. How unlike she is to those who boast and swagger on account of their own gifts, their abilities, their works! St. Francis de Sales puts it well:

While Gabriel was declaring her Mother of God and Queen of angels and men, while he was giving her to understand that she was to be exalted above all creatures angelic and human, she was lowering herself at the feet of all, saying: I am the handmaiden of the Lord. Great humility this! The holy Virgin had then such a clear knowledge of the misery of our nature and the distance between God and man that, seeing herself exalted and chosen above all, she abased herself to the lowest depths of her nothingness before the incomprehensible and inexhaustible abyss of the immense goodness of God.

She who was the holiest of mortals recognized that, in comparison with Almighty God, she was no more than a handmaid He had fashioned for His purposes—one among the many servants of Yahweh across the generations. First came her silent acceptance of God’s plan. Only afterwards did Mary speak about herself and her role to Elizabeth, out of the fullness of a heart burning with love of God.

In the Virgin Mother we can already see the redemption of Christ fully at work, turning her heart wholly to God. As St. Ambrose says: “It should not surprise us that the Lord, wishing to redeem the world, began His work with Mary. If by means of her the salvation of all mankind was being proposed, she had to be the first to receive the fruit of salvation from her Son.”

The Virgin says that her soul “magnifies” the Lord. Mary’s very soul makes the Lord great, her soul contributes to His greatness in the sight of men! Yet she immediately says that it is God who has exalted her. The greatness she possesses comes only from Him. Because she has received and used the gifts He willed to give her—“He has done great things for me, and holy is His name”—she became and remains truly great; her holiness is her greatness, and precisely in her holiness does she magnify the Lord. The Lord is infinite holiness and Mary in her life of faith and sacrifice drinks deeply of this endless divine goodness.

We need to understand that all of the privileges accorded to Our Lady, such as her being the Mediatrix of All Graces, make sense only because of her participation in the divine nature (cf. 2 Pet 1:4), which makes her truly holy and therefore deserving of these privileges. Her mighty privileges are our hope, because they show that all of us, to the extent that we become holy through the grace of Christ, will gain a share in the glory possessed by the Mother of God. She is all-glorious because God in his love filled her past overflowing with His grace.

Mary declares that “God has shown strength with His arm”—yet the royal Redeemer is merely a tiny embryo in her womb! The way God shows strength is much different from the way the rulers of this world show it with their armies and artillery, their palaces and pomp. His strength is shown in the humility of an attentive, healing, uplifting love. When our Lady says that “He has scattered the proud in the imagination of their hearts,” we can see how the humility of God’s plan, in its silence and vulnerability, departs from the Jewish expectations of who the Messiah would be, the kind of kingdom He would establish. Simply look at what a scandal this helpless infant-God is!—a stumbling block to militant Jews, folly to the Greek philosophers, a provocative challenge to everyone who thinks of God as though He were (or ought to be) a massively inflated version of our human might and wisdom.

In their portrait of the Jews and the Romans, the Evangelists have impartially recorded for all time the disappointment of zealots and skeptics throughout the ages—think of the communists and socialists of modern times—who find Jesus to be altogether other than what they expect or demand a Redeemer to be. The Holy One sent by the Father to recover the lost sheep of Israel and proclaim good news to the Gentiles does not side with the haughty, the imperious, the militant, the clever. He “exalts the lowly,” He defends and nourishes the poor, he blesses those who seek Him in purity of heart. He sends away the rich, those who are full of themselves and loaded down with things they do not need; He feeds the hungry who are empty of self-attachment and are as nothing before God. Mary could not have known that her utterance here would be fulfilled beyond the most extravagant hopes when Christ, the Bread of Life who came down from heaven, gave Himself to us in the Most Blessed Sacrament: this is the nourishment that God has in store for those who hunger and thirst after His kingdom!

If Christ brings the marked distinction and break from the Old Testament, in the novelty of His word, His life, His passion, His cross and His resurrection, Mary through her silence and faith incarnates the continuity realized in the poor of Israel, in those to whom is addressed the beatitude: “Blessed are the poor in spirit.” In essence, the Beatitudes only offer variations on the Magnificat’s spiritual center: He ejects the mighty from their throne, he elevates the humble. The center of the Magnificat contains simultaneously the center of the biblical theology of the people of God. (Joseph Ratzinger, Daughter Zion)

Mary’s inspired song teaches us about faith and humility. When our Lord after His Resurrection says to the doubting Thomas: “Blessed are those who have not seen, and yet believe” (Jn 20:29), He is, so to speak, adding another beatitude to those He preached in the Sermon on the Mount; He adds this beatitude for the sake of future believers. But these words can be applied to His own mother in a special way, for no greater was ever required of any human being. She was called upon to believe at the very first moment, the moment when the entire salvation of the world hinged upon her consent; and having given her consent, she had to renew it every day, in the face of the grievous trials her vocation was to bring. She walked in the darkness of not knowing what was to happen today, much less tomorrow. “A sword shall pierce your heart” (Lk 2:35). Let us not imagine that Mary found her life an easy one. Her great love turned her suffering ultimately into rejoicing, but her sufferings were such as none of us can begin to conceive.

When a woman of the crowd raised her voice and said to Jesus: “Blessed is the womb that bore thee and the breasts that nourished thee,” Jesus responds: “Yea, rather, blessed are they who hear the word of God and keep it.” In saying this, Jesus, not discounting His mother’s inexpressibly intimate role in his infancy, praises her for the true source of her blessedness: she was the one person in the history of the world who heard God’s word with perfect receptivity and kept it with perfect fidelity. She is the model whom Jesus wishes to give to us, or more than that, the mother he wishes to give to us.

As the theological virtue of faith implies that a person cannot now see the truth with his intellect but adheres to it by an act of the will which, supported by grace, moves the intellect, it is clear that Jesus Himself did not live a “life of faith.” He knew with divine clarity whence He had come and whither He was going. He possessed uninterruptedly, in His human soul, the beatific vision of that divine glory He shares eternally with the Father. His mother, however, with her human scope of knowledge and the frailties of the human condition, lived the virtue of faith during her entire life; she heard God’s word in the depths of her soul, pondered it in her heart, and adhered to it in her actions. She thus exemplifies all the virtues of the Christian saint; she, the mother of Jesus, was the most perfect child of God.

Certainly Mary did not comprehend the ultimate. How could she, a mortal, fathom the mystery of the living God! But she was capable of something which on earth is more than understanding, something possible only through that same divine power which, when the hour has come, grants understanding: faith. She believed, and at a time when, in the fullest sense of the word, probably no one believed. “And blessed is she who has believed…” If anything voices Mary’s greatness, it is this cry of her cousin Elizabeth. (Romano Guardini, The Lord)

Let us keep the prayer of the Magnificat ever in our hearts. It teaches us of the wonderful works of God, the joy of obeying His Holy Will, the victory He has accomplished for us. It teaches us about the royal path of humility, the ever-flowing gift of divine mercy, and the privilege of sharing in the mystery of redemption. “May the soul of Mary be in all of us to magnify the Lord; may the spirit of Mary be in all of us to find joy in God,” says St. Ambrose. To this we can add the consoling words of St. Francis de Sales: “Be meek, humble, charitable, and kind, and magnify the Lord with her during this life. And if you do so humbly and faithfully in this world, you will undoubtedly sing the Magnificat in heaven, with the Virgin herself.”