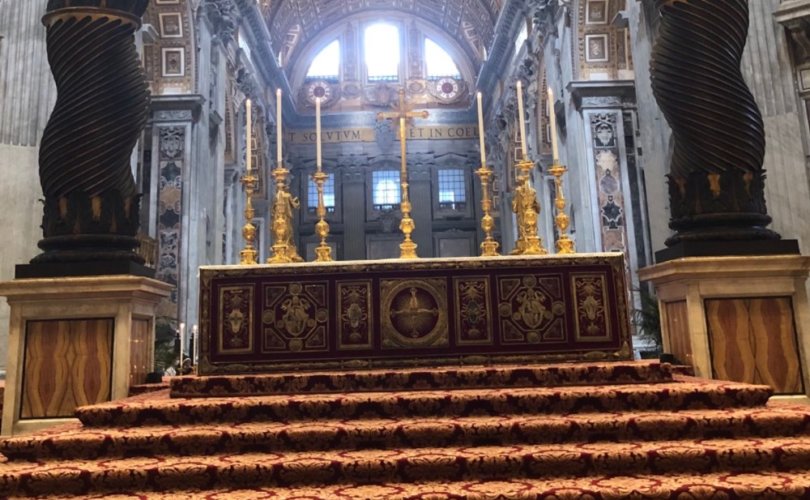 December 18, 2020 (LifeSiteNews) – Something happened in the Vatican in the last months that has been largely overlooked: the High Altar of St. Peter's – the Papal Altar, which is situated right on top of the tomb of St. Peter himself – has been left unused now for many months. Professor Armin Schwibach, a Vatican Correspondent who has lived in Rome for more than three decades, describes it as a “symbolic emptiness.” This fact comes in light of the coronavirus lockdowns, but also after Pope Francis, in October 2019, welcomed a bowl with earth dedicated to the false goddess Pachamama and placed it, against the liturgical rules, on that very altar.

Professor Armin Schwibach, a professor of philosophy in Rome and Rome Correspondent of the Austrian Catholic website Kath.net, posted on Twitter on December 17 a photo of the High Altar at St. Peter's Basilica – the Papal Altar at which, generally, and this for centuries, only the Pope offers the Holy Sacrifice of the Mass – and he himself then commented: “The emptied and today unused papal altar. Now a kind of perceptible hole in the middle of the basilica.”

The emptied and today unused papal altar. Now a kind of perceptible hole in the middle of the basilica pic.twitter.com/oasVBlMm5h

LifeSiteNews reached out to Professor Schwibach, asking him to explain the meaning of his commentary and photo. He told LifeSite that since the corona lockdown in the Vatican, the Pope has never offered the Sacrifice of the Holy Mass on this altar anymore. Instead, Pope Francis has offered Holy Mass, for example on Easter of this year, on the altar of the Chair of St. Peter, which is situated behind the high altar of the basilica, and only with a small congregation present. Here is a video of that Mass. The first minutes show how the High Altar is empty, and the altar behind it is being used. Also on December 12, the feast of Our Lady of Guadalupe, Pope Francis celebrated Mass on that other altar behind the High Altar, passing by the Papal Altar without visibly bowing to it. For all these months now, the Papal Altar has been abandoned, creating a “symbolic emptiness,” in Schwibach's words.

As the German journalist explained, the Pope has also abandoned his televised Masses at his Santa Marta residence, and this since May 18. Schwibach, who usually reported on these regular (three to four times a week occurring) Santa Marta homilies, added that no explanation was given as to why the Pope abandoned his public Masses altogether, but for the few occasions, such as Christmas, or, recently, the November 28 consistory where he had made new cardinals. These Masses, as noted above, take place at the altar of the Chair of Peter, behind the Papal Altar.

Still last year, for the Christmas Vigil Mass on December 24, 2019, Pope Franis celebrated Mass on the Papal Altar, with the basilica filled with faithful. This year, he will celebrate the Christmas “Midnight” Mass at 7.30 pm, with a small congregation, and this time on the altar of the Chair of St. Peter.

The Papal Altar, or the Altar of the Confessio, is the centerpiece of St. Peter's Basilica, with the Baldachin made by Gian Lorenzo Bernini. This altar was consecrated by Pope Clement in 1594 and is situated on top of the tomb of St. Peter himself, which is found below the cathedral. The Altar of the Confessio is also placed there, commemorating St. Peter's having witnessed to his faith with his martyrdom.

On March 10, St. Peter's Basilica had been closed due to the corona restrictions, and it was only Cardinal Comastri who at that time and until May prayed a televised rosary at St. Peter's that touched many hearts around the world, due to his heartfelt pleas to Our Lady for help. Recently, at the end of November, Comastri resumed this pious and beautiful practice. At this point, the basilica is open for visitors.

The significance of the absence of the Pope at the Papal Altar lies not only in the fact that it is the papal altar per se and links the current Pope directly with St. Peter himself. It also lies in the fact that Pope Francis had, on October 27, 2019 – at the closing Mass of the Amazon Synod – placed on that very same altar a highly controversial bowl of plants that had been offered up to the false goddess Pachamama at the beginning of the Amazon Synod. Many saw in this bowl an occult sign, an offering to a demon, that was scandalously placed on God's altar on which the Pope offers the Holy Sacrifice of the Mass.

At the time, Dr. Robert Moynihan, a U.S. journalist and Vatican expert, noticed this strange event – especially since the Pope also broke the liturgical rules by placing that bowl on the altar itself, where only items are to be placed that are needed for the Holy Sacrifice of the Mass. Moynihan described how he “learned that a bowl of soil with plants in it is often connected with ceremonial rituals involving Pachamana” and that this bowl then usually also has some sort of red color, which actually also was to be found in the bowl on the High Altar at St. Peter's.

Dr. Moynihan speculated and said that “it seemed that the bowl of flowers presented at the offertory of the final Synod Mass, and then placed on the altar during the consecration, may have been connected with a ritual of veneration, and thanks, to Mother Earth, known as Pachamana…”

But we need not further speculate. In this short video prepared by Gloria.tv, one can see that this very same bowl had been first offered up to Pachamama by a “priestess” in the Vatican Gardens during a pagan ceremony on October 4, at the beginning of the Amazon Synod. The bowl subsequently was carried over by her to Pope Francis who presided over the ceremony, and he then blessed it.

The Amazon Synod was surrounded by many controversial and scandalous events and statements, such as the honoring of Pachamama statues, but also the promotion of religious indifferentism and outright apostasy.

Not long after this scandalous event, Pope Francis decided not to be called anymore in the 2020 Vatican Yearbook “Vicar of Christ,” giving this title the character of merely being a “historic title.” Instead, he placed his personal name on top of his entry, Jorge Mario Bergoglio. In the 2019 Yearbook, his entry was still entitled “Vicar of Jesus Christ.” Professor Schwibach at the time commented on twitter: “It seems that they continue to dismantle everything.”

Here a summary of the events since last year's Amazon Synod: First the Pope had blessed a sacrifice that had been offered to a false god, and then he placed it on the very altar on which he usually offers the Son of God to God the Father. In the 2020 Yearbook, he declines to be called “Vicar of Christ.” The coronacrisis breaks out, which is then being used by government authorities to close down churches and restrict Mass attendance, along with the Pope's collaboration and approval. Then the Pope stops altogether celebrating Mass on that very same Papal Altar on which he had earlier placed the Pachamama bowl. His Christmas Vigil Mass is not even a midnight Mass, but will take place at 7.30 p.m., due to the existing curfew rules in Italy (even though the Vatican is its own city-state and the Pope is its head). The result of these papal acts are that now in many places in the whole world the Christmas Midnight Mass, commemorating the birth of the Christ-Child, has been cancelled. One may ask whether there is a connection between all of these events: that is to say, from the Pachamama bowl on the Papal Altar to the cancellation of the Christmas Midnight Masses in many parts of the world.