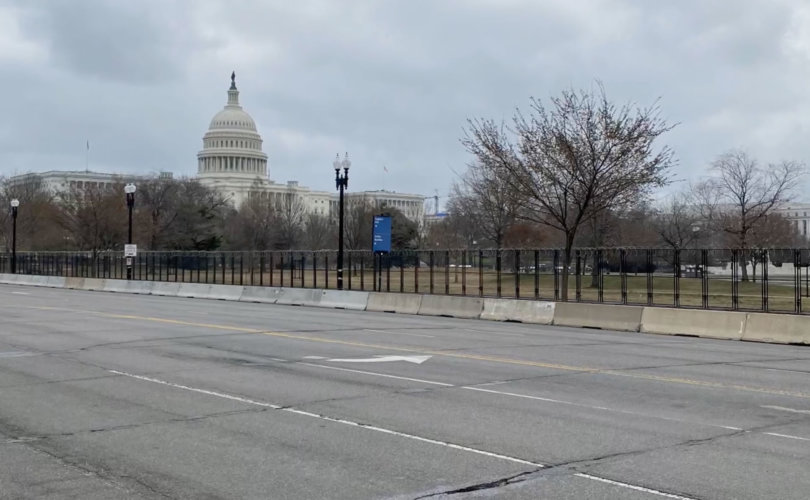 WASHINGTON, D.C., March 23, 2021 (LifeSiteNews) — Our nation’s capital is now occupied by a regime that is antithetical to American exceptionalism; freedom of religion, assembly, and commerce; and free and fair elections.

They hold the U.S. Capitol and White House hostage as they allow invaders to storm in through the southern border.

It’s as if the driving purpose underlying all of their actions is to foment hate and force isolation.

Their continued mask mandate is not meant to protect our health; it is meant to dehumanize and demoralize. It’s meant to isolate you by splintering communities, snuffing out Christian fellowship, and cutting off free access to the sacraments.

The short video displays the stark difference between Washington, D.C. after Biden-Harris and before. The contrast is stunning.

The first 22 seconds is a montage of photos I took last week, March 17, along the north side of the heavily guarded U.S. Capitol perimeter, surrounded by vacant streets; the 48 seconds that follow show patriotic Trump supporters singing The Star-Spangled Banner on November 14, 2020.

The current regime cannot risk having another display of patriotism in our capital city. Instead, they have erected barricades and tall fences topped with razor wire, flanked by armed military, all meant to give the appearance that the venerable U.S. Capitol building – a great symbol of democracy – needs to be protected.

In reality, the only thing being protected is the Biden-Harris-Pelosi regime’s fabricated narrative that conservatives of all stripes are a dangerous threat to the nation.

Let’s be clear: Conservatives are not a threat to the nation. Who or what are conservatives a threat to? They are a threat to tyranny and totalitarianism; to socialism and Marxism; to atheist progressives; to the abortion industry and Big Pharma; to LGBT political power; to mainstream media; and to Big Tech.