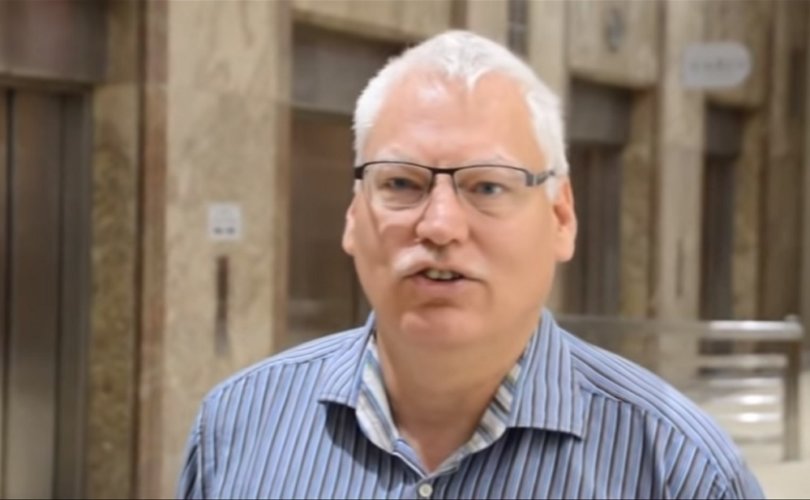 April 5, 2019 (LifeSiteNews) — We told you this was coming. We warned you it would happen. We were not crying wolf. We were telling you the truth. And now it is here, as a headline announces: “Canadian tribunal fines Bill Whatcott $55,000 for expressing Christian views on ‘transgenderism.’” In other words, Whatcott called a biological male (who identifies as a female) a “biological male.” That was his crime.

What a miscarriage of justice. What an assault of freedom of speech and expression.

John Carpay, president of the Justice Center for Constitutional Freedom, which defended Whatcott, noted in protest, “The Supreme Court of Canada has long held that freedom of expression is the lifeblood of democracy.” But not when it crosses the lines of transgender activism. Freedom halts there.

Carpay added, “Society is full of people with diverse views and the Tribunal’s decision undermines the foundational principles of the free society and jeopardizes the health of Canada’s democracy.”

Precisely so. But, as I have stated often, this was always the end-goal of radical LGBT activism: the opposition must be silenced.  (And until it is legally silenced, it must be socially shamed.)

Last month, a Catholic journalist in England was interrogated by police at her house after she “misgendered” a child with whom she had appeared on TV. How dare she identify the child based on its biological sex? (For the shocking details, see here.)

Now, in Canada, a Christian activist has been fined $55,000 for the “hateful” act of misgendering an adult male. How soon before this reaches America?

Mass Resistance notes, “Whatcott’s ‘offence’ is still considered perfectly legal in the United States. But for how long? (We are already seeing private censorship regarding transgenderism on Twitter, Facebook, YouTube, and Vimeo!) Passage of the pending federal ‘Equality Act’ (H.R. 5) will insert ‘gender identity protections’ throughout federal law.”

In reality, some of these laws are already on the books in America, with New York City calling for fines up to $250,000 for “misgendering” someone in the workplace. (This was put in place in 2015.) And in 2016, “A transgender schoolteacher in Oregon won a $60,000 settlement from a school district after co-workers allegedly failed to address the teacher by the proper gender pronouns.” (For examples from the UK, see here and here.)

Is the water hot enough for the frog to take notice?

When bill C-16 (the Trans Rights Bill) was being debated in Canada, Prof. Jordan Peterson opined that, under this new law, he could go to jail for refusing to follow transgender speech guidelines. For making such claims, he was ridiculed. As expressed in an article on Vice, “No, the Trans Rights Bill Doesn’t Criminalize Free Speech. U[niv] of T[oronto] Prof Jordan Peterson has made C-16 a rallying point for free speech advocates. But experts say he has it all wrong.”

Tell that to Bill Whatcott.

As Mass Resistance explains, “During the British Columbia elections in the spring of 2017, Christian activist Bill Whatcott passed out hundreds of flyers notifying people that one of the local candidates for Parliament, Morgane Oger — who claimed to be a woman and dressed as a woman — was actually a man named Ronan Oger. (In fact, up until five years ago, Oger lived relatively normally as a father with his wife and two children.)”

That was it. He simply reported the truth: Morgane was a biological male.

For that he was arrested, held in jail, and ultimately fined for committing a hate crime.

It is absolutely true that Whatcott’s flyer also spoke out against homosexuality and transvestitism. And it is certain that many found his flyer to be offensive. (For the text of the flyer, see here, p. 104.)

So be it. People say offensive things day and night in countless public settings, and those freedoms are protected by the law.

You might even say, “As a Christian activist, Whatcott should simply preach Jesus and not warn voters that Oger is a not a female but a male.”

You’re entitled to that opinion.

What is not debatable — meaning, it should not be debatable — is that Whatcott has the legal right to tell the truth about Oger.

Not according to the Canadian tribunal, which issued a 104-page ruling, concluding that 1) “Mr. Whatcott’s conduct  was discrimination contrary to the Code” and that he must cease and desist from such action in the future; 2) he must “pay Ms. Oger $35,000 as compensation for injury to her dignity, feelings, and self‐respect; 3) he must “pay Ms. Oger $20,000 as costs for improper conduct”; and 4) he must pay Oger interest due. (The Code in question is the Human Rights Code, to my knowledge, related to but not identical to Bill C-16.)

So this is not the prediction from a “sky is falling” pessimist. This is a factual report from a biblically based realist.

Expect this in a city near you in the coming days, unless you stand up and speak out today.

As followers of Jesus, we can tell trans-identified people that we love them and wish them no harm without agreeing with their perceptions or affirming their choices.

You have been forewarned. Again.