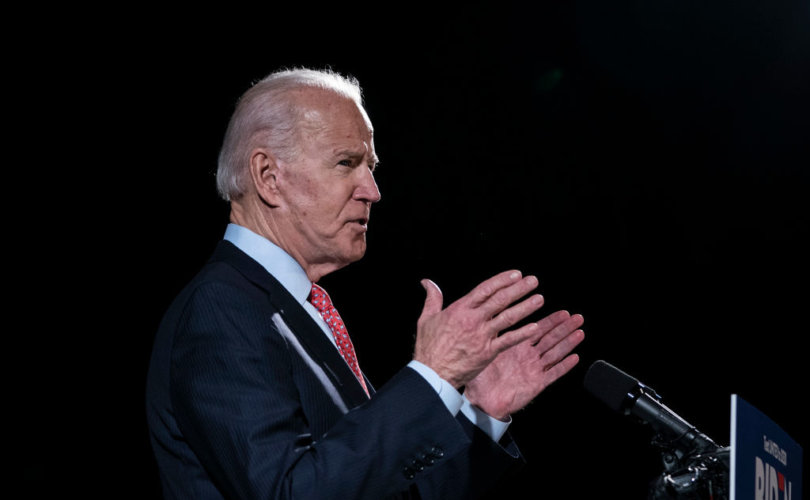 May 6, 2020 (LifeSiteNews) – The conventional wisdom of the American chattering classes at the moment seems to be that Joe Biden was the moderate, middle-of-the-road choice for Democratic primary voters: Not too Communist, not too radical, and not too unsettling for the working-class voters that voted for Trump in 2016.

The logic of this seems to be primarily based on two factors. First, Biden is old. In fact, at times he appears to be visibly aging before our eyes as he muddles through TV segments that are intentionally short but seem interminably long. The second factor is that he is not Bernie Sanders, and thus does not have baggage the size of Cuba or the former Soviet Union.

But it is important to remember that Joe Biden is not simply some geriatric and de-fanged old-school liberal who will serve as a respite from Donald Trump for the next four years. He is a politician who has been on the cutting edge of mainstreaming the Sexual Revolution for years, and we should not be fooled by the fact that he appears to be a singularly unthreatening figure.

Exhibit A is Biden’s most recent endorsement, which came from the National Center for Transgender Equality Action Fund. In a Tuesday press release, Executive Director Mara Keisling was positively effusive:

Joe Biden is the advocate and president we need at this consequential moment. He has the temperament, the experience and wisdom to lead our country. Throughout his career in public service, work as a private citizen through the Biden Foundation, and now his campaign to lead our nation, Biden has demonstrated his commitment to transgender people and the LGBTQ community.

Biden has a strong agenda for addressing the issues that face transgender Americans, a record of getting big ideas done during his time as vice president in the Obama-Biden administration, and a history of ensuring that transgender people are protected, including protections for transgender women as part of the reauthorization of the landmark Violence Against Women Act he authored. Over the years he has consistently made clear that ‘transgender equality is the civil rights issue of our time.’ With Joe Biden, we know we will be engaged, we will be seen, and we will not be erased.

Keisling’s enthusiasm is understandable. Last year, in fact, Biden was interviewed by her for the transgender lobby group’s Transform the White House Project. During the interview, Biden told Keisling that people of faith—including Jews, Christians, and Muslims—need to get on board with the transgender agenda already. After all, he certainly has. Predictably, he also condemned Trump for “rolling back” transgender rights, stating that the “idea that someone can tell you that you can’t be who you are in your heart and soul is just wrong.”

Biden’s campaign has already responded to the endorsement, with his LGBTQ+ vote director Reggie Greer stating in part that:

On behalf of Vice President Biden, our campaign is deeply honored to have the National Center for Transgender Equality Action Fund's endorsement and partnership in this election.

In 2012, the same year he boldly declared his support for marriage equality, Vice President Biden made clear that 'transgender equality is the civil rights issue of our time.' He understands what's at stake, and has built an unmatched record of ensuring our nation’s laws and discourse value, reflect, and see the lives, dignity, and worth of all transgender people. To the contrary, Donald Trump and Mike Pence have done nearly everything in their power to endanger the lives of transgender people or ignore the issues disproportionately impacting them. That's why it's all the more reason we are grateful for today's announcement.

This endorsement—and the Biden campaign’s response—is a good reminder for voters who believe that a vote for Joe Biden is a vote for a moderate alternative to Trump. In fact, Biden’s campaign website prominently features “THE BIDEN PLAN TO ADVANCE LGBTQ+ EQUALITY IN AMERICA AND AROUND THE WORLD,” which touts his support for the Equality Act, a piece of legislation that would transform the United States and eliminate pro-life laws in all fifty states. The passage of the Equality Act would set the pro-life and pro-family movement back decades in one fell swoop.

Biden has stated that the passage of the Equality Act would be a “top legislative priority,” and also promised to ensure that adoption agencies could not refuse to place children with same-sex couples This presumably includes religious adoption agencies and foster care agencies. He has promised to enshrine in federal law recognition of “gender identity,” and appoint radical pro-LGBT judges to America’s courts. (“Non-binary” people also get several prominent mentions.) And then there is this section of The Biden Plan, which essentially advocates for the elimination of religious liberty:

End the misuse of broad exemptions to discriminate. Religious freedom is a fundamental American value. But states have inappropriately used broad exemptions to allow businesses, medical providers, social service agencies, state and local government officials, and others to discriminate against LGBTQ+ people. The Trump-Pence Administration has deliberately and systematically attempted to gut protections for the LGBTQ+ community by carving out broad religious exemptions to existing nondiscrimination laws and policies across federal agencies. Biden will reverse Trump’s policies misusing these broad exemptions and fight so that no one is turned away from a business or refused service by a government official just because of who they are or who they love.

And that’s not all. Biden wants to allow an additional “X” in addition to the “M” and “F” for male and female on government identification to accommodate those with different gender identities. He wants a total, nation-wide ban on “conversion therapy” via the Therapeutic Fraud Prevention Act of 2019, which according to the Congressional website is designed to do the following:

This bill prohibits commercial conversion therapy, which is a practice or treatment designed to change a person's sexual orientation or gender identity or otherwise change behaviors, thoughts, or expressions related to gender or sexual attraction. This prohibition does not apply to treatment that assists an individual undergoing a gender transition or facilitates identity exploration and development.

Got that? If someone has unwanted same-sex attraction or gender dysphoria, they would be banned from seeking the counselling and help they desire. But a specific carve-out in the law ensures that those who actually wish to convert themselves into a different gender are expressly permitted to pursue those hormone treatments or sex change surgeries, probably at the taxpayer’s expense.

Also included in Biden’s LGBTQ platform is more funding for Planned Parenthood, a promise to advance the LGBTQ agenda worldwide via the State Department (presumably also in countries that have no desire for this sort of ideological colonialism), and even “[w]ork with Congress to enact legislation – like the GLOBE Act currently before the House—which will permanently make upholding LGBTQ+ rights a priority of the foreign policy of the United State[s].”

So there you have it. Joe Biden is the furthest thing there is from a moderate candidate. In fact, the reason he is receiving such enthusiastic endorsements from LGBTQ and abortion rights groups is because he is offering them everything they’ve ever wanted, and then some. A Biden presidency would fundamentally transform the United States of America and turn it into the nation that the LGBTQ activists and their progressive friends have always desired. If Biden gets elected and the Democrats take the Senate, this could all very well come to pass.

Those comforting themselves with the idea that a vote for Joe Biden is a “return to normalcy” are delusional. A vote for Joe Biden is a vote for an America where pro-life laws are overturned, religious liberty is destroyed, American power is used to bully other nations into accepting the LGBT agenda, abortion on demand and funded by the taxpayer is considered a human right, Christian adoption agencies are forced out of business if they refuse to place children with same-sex couples, and those with unwanted same-sex attraction or gender dysphoria are banned from getting the assistance they desperately desire. That would be Joe Biden’s America.

And if that’s your idea of “normal,” then you were never remotely conservative in the first place.

Jonathon’s new podcast, The Van Maren Show, is dedicated to telling the stories of the pro-life and pro-family movement. In his latest episode, he interviews Anne Schlafly Cori who highlights the smearing of her mother Phyllis Schlafly in Mrs. America and shares the wonderful, selfless things Phyllis accomplished in her life, including helping get Ronald Reagan elected.