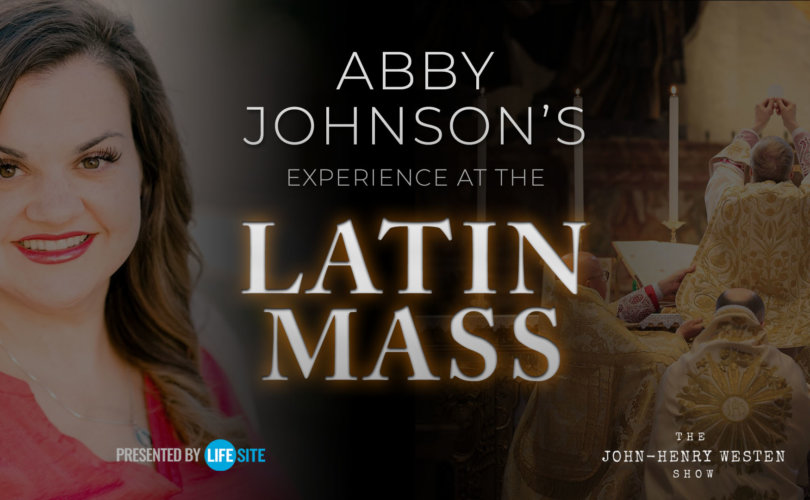 July 21, 2020 (LifeSiteNews) — Three weeks ago on twitter, pro-life warrior Abby Johnson revealed to her followers that she attended the Traditional Latin Mass for the first time. Since then, Catholics on social media have been wondering just what prompted Johnson to attend it in the first place…and what she thought about it.

Today on The John-Henry Westen Show, I had the privilege to speak with Abby about her experience at the Latin Mass and to hear about why she only receives Holy Communion on the tongue.

Abby Johnson is perhaps best known for being the subject of the hit movie Unplanned. The film is about her time spent working at Planned Parenthood and eventual embrace of the pro-life message.

Johnson, who became Catholic in 2013, told me today that there were many “frustrations” in the Church that lead her to attend the Latin Mass.

“As of the past couple years, it's been tough. There have been times that I’ve been troubled by things I'm seeing in church.”

“The liberalism inside of the church, [the] different appointments by the pope, even things that the pope has said that I haven't understood,” have left me frustrated, she said.

“I think that the pro LGBT agenda has sort of seeped into the church” too.

She told me that she and her husband were wondering where they could turn. Previously, she thought Latin Mass Catholics were “crazy…weirdo Catholics.” But after praying to God about what they were supposed to do, she kept getting people put into her life that encouraged her to try something different. So one day Abby told her husband, “you’re going to think this is crazy, but I actually want to go to Latin Mass tomorrow.” He agreed and they went.

“I remember just sitting there and just really taking it all in,” she said. “It was such a beautiful experience…the music was out of this world!”

She also said she was also taken aback by other aspects of the Mass.

“At first, when I sat there…I was a little offended. Like, ‘Why am I not a part of this?’And then I thought, ‘Well, why do I need to be a part? I don't have anything to do with it. That's between the Priest and God. God doesn't need me to say these prayers.’ And it just became so apparent that God doesn't need me to be a part of the consecration.”

She also said that she “was struck by just how masculine the service felt…everything was led by priests. It wasn't a laity led service.”

“For the first time in a while…I feel very reinvigorated in my faith,” she exclaimed during our conversation today. “I'm excited to go to Mass! I haven't felt that way in a long time…It doesn't feel like a chore anymore!”

Johnson also said that “there’s a lack of reverence toward the Eucharist” going on in the Church and that it’s causing people to not believe in the True Presence. “It's really a sort of a Protestant way of thinking that has seeped into the mass,” she said.

Even before she and her husband became Catholic, Johnson said they were taught about the Eucharist and about the real presence.

“I remember thinking to myself, ‘why would anybody receive the Lord on their hand?…If you truly believe that is the real presence of Lord, why would you ever have that in your hand? Why would you ever take the chance that that part of the Eucharist could be left behind on your hand to be discarded or, you know, thrown away or wiped away?’ And so I remember in that moment saying I will never receive on the hand. I mean, no, absolutely not.”