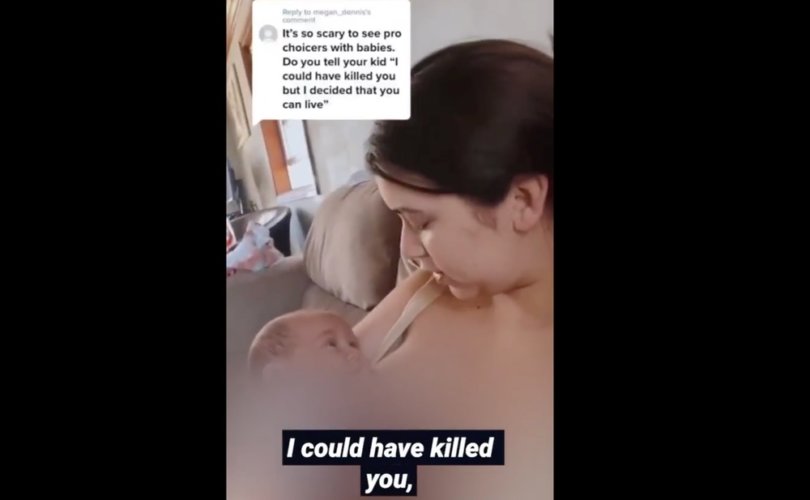 (LifeSiteNews) — The social media account Libs of Tik Tok, which snags public videos made by leftists and reposts them on Twitter, has once again helped conservatives witness left-wing pro-abortion radicalism up close – and this time it’s particularly chilling.

In one of the most recent video clips shared by the popular Twitter account, we’re presented with an image of a young mother with her newborn infant daughter.

If the clip were just an image, that’s all we would ever know: just a mom nourishing her little baby. But it’s not a still image, it’s a video.

In the video, the young mom cradles her sweet, vulnerable baby in her arms, looking into her innocent eyes as she softly croons: “I could have killed you, but I chose to let you live.”

Demonic. Pro-abortion TikToker tells her newborn baby on video “I could have killed you but I chose to let you live” pic.twitter.com/Tcfbb4dRzC

It’s a line straight out of a horror movie. At the very least, it’s something only the most deranged, disturbed, and thoroughly self-centered mother would ever utter to her helpless child.

The young woman in the video, who was apparently responding to a pro-lifers’ message asking if this were how pro-aborts talk to their kids, goes on to defend her remarks, saying she’s fully aware that she used the word “kill,” and that she means it.

You could use a different phrase, soften the reality a little, she suggests, but in the end it’s the same thing. Get an abortion or don’t, is her message. Kill your child or don’t. Who cares? Do what you want. Getting an abortion is like using hand sanitizer, she says. Killing a baby is like killing germs.

It’s stunning how quickly the pro-abortion movement went from “it’s a clump of cells” to “yes it’s a baby and yes I will still kill him.”

To give as much grace as I can to this Tik Tok mom, I have to assume that she can’t truly recognize the horror of what she is saying.

She has been brought up in a culture that has so completely thrown off the Christian faith and the moral traditions of our civilization that she has no greater ethic than the satanic maxim: do as thou wilt.

For her, as for many in our modern American culture (especially those of us in the Gen Z or millennial cohort), the greatest and only moral imperative is “choice,” or consent. If you exercise your will to accomplish something, then it is good. If your will is thwarted, then you are a victim of injustice.

In our relativistic society, the idolatry of consent has even afforded the will magical powers to define reality itself. This is clearly evidenced in the case of abortion and the radical transgender movement.

If a mother wants to have a child, then the living being in her womb is truly a baby. If she doesn’t want the baby, her will can magically turn him into a meaningless subhuman parasite that can be casually destroyed.

Likewise, if a man wants to be a woman, then he is one, just like that. The will accomplishes all.

Of course the elevation of the will has a fatal flaw, one which is particularly glaring in the case of abortion: Whose will prevails?

Many times our wills come in conflict with one another. Whose will should supersede the other?

While medicalized, legalized, and corporatized infanticide may be a new phenomenon in an ostensibly Christian culture, the ethic upon which it’s rooted goes back to Cain killing his brother Abel, and it’s been reflected in the shattered glass of tyranny throughout all of human history.

It’s the brutal, hateful, and fully anti-Christian maxim that “might makes right.”

In this philosophy, if I’m bigger than you, or if you’re more vulnerable than me, or if I have more resources at my disposal than you, then I have the right to destroy you. Why? Because I can. Because I have willed it.

RELATED: If unborn life isn’t protected, then all lives are ‘up for grabs’: US bishop

The disturbing reality is that nothing the mother in the Tik Tok video said to her poor, innocent little baby girl is untrue: Her daughter has been born into a world in which she is lucky to be alive.

It’s not because of war, disease, or famine (though the baby formula shortage under Joe Biden’s watch continues to look grim), but because we have become a culture in which (as other pro-lifers have pointed out long before me) the most tender, loving, close relationship in the world has been turned into a power struggle. We are a culture in which a mother’s nearest and bitterest enemy is her own child.

I invite everyone to pray that this young Tik Tok mother can see the beauty of her child, the sanctity of life, and the joy of her new identity as the mother of a sweet and innocent baby girl.

Without that grace, her daughter will be forced to pay the steep price of her mother’s misguided, brutal, and godless ideology.