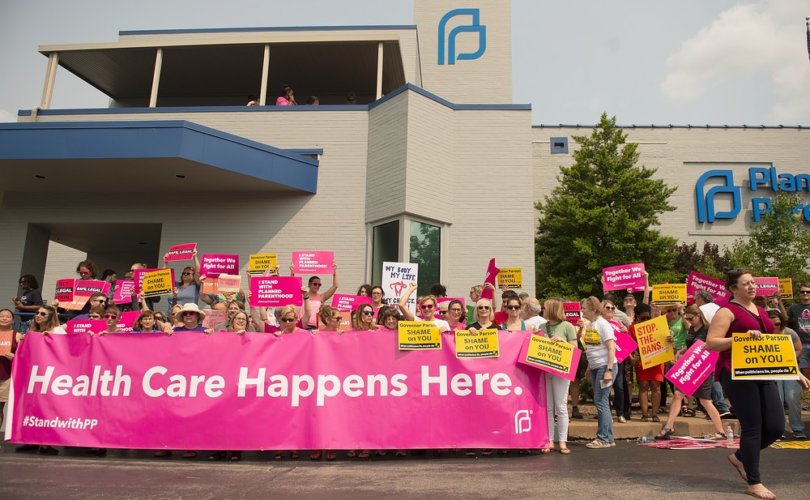 March 1, 2021 (LifeSiteNews) – Last week, the Family Research Council (FRC) released its annual report “The Real Planned Parenthood: Leading the Culture of Death.” It is a sobering look at America’s largest abortion business, which not only perpetrated over half of all reported abortions in the United States from 2018 to 2019, but also expanded into the exploding market for transgender hormone therapy. In the 2019 fiscal year, Planned Parenthood killed 354,871 babies.

According to the author of the report, Director of the FRC’s Center for Human Dignity’s Mary Szoch: “Based on Planned Parenthood’s yearly increase in the number of abortions they commit and the decrease in the number of abortions committed nationally, Planned Parenthood is becoming more and more of an abortion monopoly.” In undercover footage shot by David Daleiden and his colleagues at the Center for Medical Progress, independent abortion clinic owners were filmed complaining about Planned Parenthood increasingly pushing them out of business.

FRC’s report also noted that transgender hormone therapy is now available at 200 Planned Parenthood facilities in 31 states, making the abortion giant the second-largest provider of trans “treatments” (if they can be called that) in the country.

“Planned Parenthood has also become the second-largest dispenser of hormones designed to interfere with the natural progression of puberty in healthy teenagers, which can have lifelong, detrimental impacts on their health, including interference with brain development, inhibition of normal bone-density development, and sterilization,” Szoch stated. “Planned Parenthood's indifference to the truth that cross-sex hormones can leave a person incapable of having children is completely in line with their racist, eugenicist founder, Margaret Sanger's words, ‘But for my view, I believe that there should be no more babies.’”

The story of Planned Parenthood’s growing sideline in transgender hormone therapy was broken by the Wall Street Journal’s Abigail Shrier, author of Irreversible Damage: The Transgender Craze Seducing Our Daughters, on her Substack newsletter “The Truth Fairy.” Shrier interviewed a Planned Parenthood staffer who stated that “trans-identifying kids are cash cows” for the abortion business, and that a number of employees have expressed concern with how easy it is for teen girls to access hormone therapy. The employee is pro-abortion but appalled by Planned Parenthood’s new sex-change sideline.

Planned Parenthood’s political advocacy also appears to be paying off. “Planned Parenthood pledged to spend $45 million on the 2020 election cycle,” Szoch noted. “Though they claim to be a ‘non-partisan’ organization, $0 went to Republican candidates. It is not shocking that the Democrats Planned Parenthood campaigned so hard for are now doing the organization's bidding. Nearly six in ten Americans oppose taxpayer dollars for abortion, yet Democrats in Congress and President Joe Biden have called for an end to the Hyde amendment, which prevents federal taxpayer dollars from going to fund abortion, and these same politicians are currently working to increase Planned Parenthood's government funding.”

With the levers of power in the hands of Joe Biden, the most pro-abortion president in American history, and Kamala Harris, a long-time abortion extremist, Planned Parenthood is poised to expand even further, with all barriers to government funding being removed and the Equality Act potentially paving the way for abortion laws to be wiped away across the country. Hundreds of thousands of Americans are destroyed in the womb each year – but Planned Parenthood is making a killing.

As reported on Fox News, 37 Planned Parenthood affiliates are being asked to return a total of $80M by the Small Business Administration for taking funding for the Paycheck Protection Program (PPP) which they were apparently not entitled to apply for, nor receive.

Affiliates of organizations employing more than 500 people are not entitled to apply for PPP funding, and the abortion giant's Planned Parenthood Federation of America, under which all of the official regional offices are affiliated, employs more than 600 people and has more than $500M in assets.

Please SIGN this petition which demands that Planned Parenthood return the $80M in PPP funding, and which supports the U.S. Attorney General and the SBA in their efforts to retrieve the money.

It should not be used to fund America's biggest abortionist who makes millions off of desperate women and men by killing their children.

Senators Marco Rubio (R-FL) and Josh Hawley (R-MO) have both called for an investigation into how these Planned Parenthood affiliates were able to apply for and receive PPP funding, contrary to the rules established for the program.

Just after the SBA was published, Senator Hawley tweeted:

The money needs to be recovered and if anybody knowingly falsified applications, they need to be prosecuted
https://t.co/FKnrkHnE2P #FoxNews

And, however this PPP funding came to be in the possesion of Planned Parenthood, it now needs to be returned.

SIGN this petition which demands that Planned Parenthood return $80M in PPP funding immediately, and which supports the U.S. Attorney General, William Barr, and the SBA, in their efforts to recover the money.