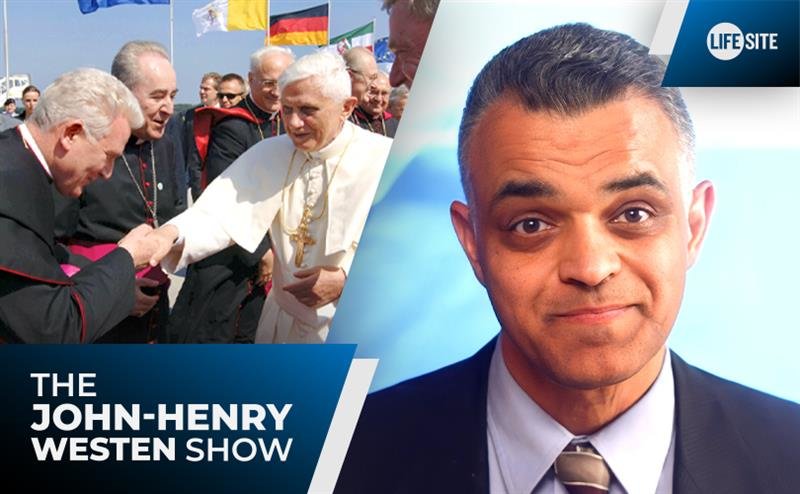 (LifeSiteNews) — On the very night of his inauguration as Pope, Benedict XVI asked for prayers that he not run away out of fear of the wolves. “Pray for me, that I may not flee for fear of the wolves,” he said.

We already knew that in his position as head of the Congregation for the Doctrine of the Faith (CDF) he had been exposed to much of the dark underbelly of the Church, and had encouraged John Paul II to deal with some of it, most notably the scandal around the founder of the Legionaries of Christ, Father Marcial Maciel.

But did he know that moral corruption of the clergy ran very deeply indeed? Did he know that his own secretary of nearly 20 years was believed to be a practicing homosexual, as Archbishop Viganò learned when he was tasked to look into him? All this came out yesterday at LifeSiteNews in a bombshell piece by LifeSite writer Dr. Maike Hickson. We will dig into that even more on this episode of The John-Henry Westen Show.

Yesterday’s LifeSite article by Dr. Hickson focused on the Vatican having sent controversial Bishop Josef Clemens to investigate homosexual sexual abuse allegations in one of the most famous monasteries in Europe, Germany’s Klosterneuburg. That incident became intensely controversial as the Vatican seemed to have closed the investigation without any substantive consequences for the perpetrators and those under whose watch sexual abuse occurred.

The concluding report given by Bishop Clemens in March of this year said “the canonical investigation is now closed and the past has been dealt with. After these tumultuous times, one may now look into the future facing new challenges.” The head of the monastery Provost Bernhard Backovsky, as Dr. Hickson reported, “did not experience any serious consequences for his objective failure in the field of sexual abuse; he was merely to stay away from the monastery ‘for an appropriate period of time,’ for the sake of healing. However, he has now already returned to the abbey.”

The positive mentioning of the abuser’s name in a homily at the very monastery where the abuse occurred caused outrage and scandal for sexual abuse victims, their families, and their legal advocates. It also served to put the spotlight onto Bishop Clemens himself.

LifeSite asked Bishop Clemens why he quoted from the abuser priest, to which Bishop Clemens replied that citing an author “says nothing about his person,” adding that “citations or references are not personal evaluations, but academically helpful references or necessary proofs of the sources used.” But you’d think that anyone with a modicum of prudence would studiously avoid quoting from a major suspect of horrific sexual abuse during a homily.

In addition, LifeSite has learned from Archbishop Carlo Maria Viganò, as well as from other reliable sources, that Josef Clemens, who was for 19 years the personal secretary of Cardinal Ratzinger at the Congregation for the Doctrine of the Faith, is believed to be a practicing homosexual.

Clemens worked under Ratzinger as his secretary from 1984 until 2003 when he was appointed by Pope John Paul II Under-Secretary of the Congregation for Institutes of Religious Life and Societies of Apostolic Life. Later in the same year of 2003, he was made secretary of the Pontifical Council for the Laity. On January 6, 2004, under Pope John Paul II, Cardinal Ratzinger personally consecrated Clemens as bishop.

Before bishops are appointed, the Vatican undergoes an investigation into the candidate for Bishop to ensure suitability. At the time, in 2003, Archbishop Carlo Maria Viganò was in charge of such investigations.

I spoke personally with Archbishop Viganò about this matter and he told me he did the investigation into Clemens.

“Working in the curia it was my office and myself that made the investigation,” he said. “The nuncio in Germany at the time was Cardinal Giovanni Lajolo. The info he sent from Germany was that there was strong suspicions that Clemens was a practicing homosexual. Thus his advice was negative on making him a bishop. My advice, as responsible for personnel in the curia, was also that Clemens should not be promoted.”

While Archbishop Viganò would have sent his report to his superiors in the Vatican, he could not confirm that his reports were received by Pope John Paul II or Cardinal Ratzinger. Viganò noted however that he was told that “Ratzinger wanted Clemens to be promoted in spite of the information that was reported from Germany to me.”

Dr. Hickson learned from another reliable source that Ratzinger himself had turned to Cardinal Joachim Meisner, Archbishop of Cologne, asking him whether he could take Clemens into his diocese.

“I can confirm,” wrote LifeSite’s source who spoke on condition of anonymity, “that Cardinal Meisner told us that he refused the request of Ratzinger to welcome Clemens in Cologne and that he did so with the words: ‘no, because of homo[sexuality].’ He [Meisner] also wanted to offer Clemens a therapy which he declined.”

LifeSite reached out to Bishop Clemens, asking him to comment on the facts as laid out in this report, both directly relating to his own personal life as well as relating to the position of Church officials.

Clemens said the claim that he is a practicing homosexual “is an untruth” and later added, when questioned about the immorality of homosexual acts of a priest, “this is known to a moral theologian who wrote his doctoral thesis in moral theology.”

When asked about Cardinal Lajolo and Archbishop Viganò and their statements, Clemens explained that he has no knowledge of it. Furthermore, he told LifeSite that he would not answer any further questions: “By giving you these clear and unambiguous answers, I consider this matter to be closed.”

Media requests concerning Bishop Clemens to Pope emeritus Benedict XVI, the Vatican Press Office, as well as Cardinal Lajolo have remained unanswered. The Archdiocese of Vienna, Austria did not respond to our media requests, either; since Bishop Clemens claimed to have followed Vienna’s assessment of the different abuse cases, LifeSite sought information from them, but was denied that information. Provost Bernhard Backovsky has also not responded to LifeSite’s media inquiry.

However, there is one more interesting thing that Archbishop Viganò told me. “It was reported to me that there was quite a fight between Ganswein and Clemens,” when Ratzinger chose Georg Gänswein as his new secretary, in 2003 and thus Archbishop Georg Ganswein was the secretary to the Pope when Ratzinger was elected Pope Benedict in 2005.

That there were scenes even in public between Clemens and Gänswein after Clemens was sidelined, was noted in the book In the Closet of the Vatican by homosexual activist Frederic Martel, who wrote that there took place “domestic scenes in public … George’s refusal to give his new telephone number to Josef [Clemens]; and finally the remake of the public scandal, in a modern version of the Gunfight at the O.K. Corral, via the last episode, of the series Vatileaks.”

So Martel draws a connection between Clemens and the Vatileaks scandal which many believe sparked Pope Benedict’s resignation.

And Martel is not the only one who saw a link between Clemens and the Vatileaks scandal.

It was the German journalist Paul Badde who, at the times of the Vatileaks scandal, on July 15, 2012, wrote in Die Welt of Josef Clemens’ jealousy that might have made him encourage papal Butler Paolo Gabriele to steal documents from Ratzinger’s desk which would shed a bad light on his new secretary Gänswein. “The drama in the Vatican,” wrote Badde in his article, “is not a coup and not a palace revolution. Instead, it becomes clear that it is about envy of the proximity of the pope.”

One of the people who are, according to Badde, envious of Gänswein’s closeness to the pope, is Clemens, “who for years has not succeeded in keeping secret and in check an almost irrational envy of his successor at the pope’s side. He had served Joseph Ratzinger for 19 years. That he considers his successor an ‘incompetent collaborator’ of the pontiff has long been whistled by the Roman sparrows from the rooftops.”

“It is not overstated,” Badde went on to say, that Clemens along with two others, stood “at, next, or in front” of Paolo Gabriele, the butler who stole the papal documents and leaked them to journalists.

The Italian Vatican journalist Marco Ansaldo, also picked up this story and suggested that part of the investigation of Vatileaks that was then pursued by three cardinals upon Pope Benedict’s request, also investigated Clemens.

“Even the sparrows on the roofs of the Vatican,” Ansaldo wrote in July of 2012, “know of the envy nurtured by Clemens, who abandoned his position as Ratzinger’s secretary after having been close to him for so many years in 2003, asking for promotion to bishop.”

Perhaps the trouble with Clemens was what spurred Pope Benedict, in his first official document in his own papacy, in 2005, to issue a document which strongly reiterates the Church’s position that homosexuals should not be admitted to seminaries and become priests. The document stated that “the Church, while profoundly respecting the persons in question, cannot admit to the seminary or to holy orders those who practise homosexuality, present deep-seated homosexual tendencies or support the so-called ‘gay culture’.”