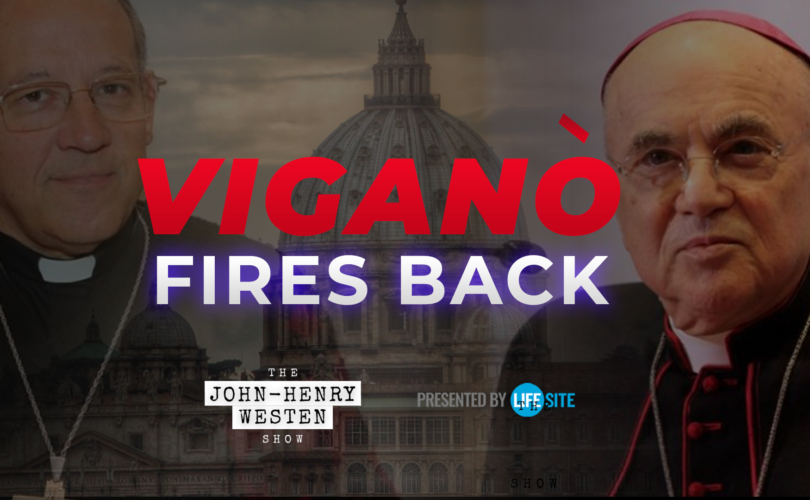 August 11, 2020 (LifeSiteNews) — Despite insanity coming from Rome and elsewhere in the Church, hope continues as brave prelates have openly chastised and challenged their brother bishops.

With Pope Francis’s Vatican showing its hand on the matter of denying the faithful Holy Communion on the tongue, Archbishop Carlo Maria Viganò has released a scathing warning.

On top of that, in the face of the U.K. bishops’ insistence that Catholics have a duty to take a vaccine for the coronavirus, even one tainted with abortion, U.S. bishop Joseph Strickland has reiterated that Catholics must “reject any vaccine that is developed using aborted children.”

Argentinian bishop Eduardo Taussig has announced the upcoming closure of his nation’s only orthodox Catholic seminary because the rector and other priests associated with it would not refuse seminarians and other faithful Holy Communion kneeling and on the tongue.

As LifeSite correspondent Dorothy Cummings McLean reports, Bishop Taussig, contrary to Church teaching, had demanded that priests refuse to administer Holy Communion to faithful who refuse to receive Our Lord in their unconsecrated hands and insist on their right to receive Him on the tongue.

The diocese announced that the seminary is being closed by order of the pope’s Congregation for Clergy.

Father José Antonio Álvarez said: “In accordance with instructions from the Holy See, it has been decided to close the seminary.”

“The measure taken by the Congregation for the Clergy, which is just the dicastery of the Holy Father that has jurisdictions over these cases, takes into consideration that due to the undisciplined reaction of a good portion of the clergy of the diocese, at this moment, this diocese is not able to put together a group of teachers who will conform to the church’s discipline,” Álvarez stated, speaking of the priests continuing to permit the seminarians and other faithful to receive Holy Communion on the tongue.

A source known to LifeSiteNews told a reporter that there were 40 “good and well-formed” seminarians who now are unsure what they will do. He called the closing of the San Rafael seminary a “real disaster,” as he believes it to be “the last really Catholic seminary in Catholic Argentina.”

Taussig, a descendant of Czech immigrants to Argentina, was appointed bishop of San Rafael by St. John Paul II in 2004. He was co-consecrated by the primate of Argentina of the time, Cardinal-Archbishop Jorge Bergoglio (now Pope Francis), and a number of other bishops.

Reacting to the ruling with an open letter to Bishop Taussig, Archbishop Carlo Maria Viganò, with biting sarcasm, wrote the following:

This decision is said to have been adopted, at your zealous insistence, by the Congregation for the Clergy, which considered inadmissible the refusal on the part of clerics under your jurisdiction to administer and receive the Most Holy Eucharist on the hand rather than on the tongue. I imagined that the laudable and coherent behavior of the priests, clerics, and faithful of San Rafael offered you an excellent excuse to close the largest seminary in Argentina and to disperse the seminarians in order to re-educate them elsewhere, in seminaries that are so exemplary that now they are empty.

Calling out Bishop Taussig as a modernist, Archbishop Viganò continued:

I can understand your disappointment in seeing that, despite the relentless work of ultra-modernist indoctrination that has been carried out in the past few decades, there are still courageous priests and clerics who do not place the obeisance of the episcopal court ahead of the respect that is owed to the Blessed Sacrament; and I can imagine your vexation in seeing that the lay faithful and even entire families… are following the good shepherds, of whom the Gospel says “the sheep recognize his voice,” and not the mercenaries who have “no concern for the sheep” (Jn 10: 4,13).

I see nothing paternal about punishing priests who do not want to profane the Sacred Host, nor any form of true charity towards those who have disobeyed an inadmissible order. Charity is exercised in service of the Good and the True: if it has error as its origin and evil as its end, it can only be a grotesque parody of the virtue. A bishop who, instead of defending the honor owed to the King of Kings and praising those who strive for this noble purpose, even goes so far as to close a flourishing seminary and to publicly reprimand his clerics is not performing an act of charity but rather a deplorable abuse, for which he will be called to respond before the judgment seat of God.

Together with the clerics and laity of your diocese, whom you have unjustly punished and seriously offended, I pray for you, Your Excellency, for the officials of the Holy See.

Meanwhile, LifeSite’s London correspondent Paul Smeaton reports that in the United Kingdom the Bishops’ Conference of England and Wales has stated that Catholics have a “duty to be vaccinated,” even if the shots are made using aborted babies.

“The Catholic Church strongly supports vaccination and regards Catholics as having a prima facie duty to be vaccinated, not only for the sake of their own health but also out of solidarity with others, especially the most vulnerable,” the letter released Thursday, July 30 states.

“We believe that there is a moral obligation to guarantee the vaccination coverage necessary for the safety of others. This is especially important for the discovery of a vaccine against COVID-19,” the bishops continue.

While the letter notes that “[t]he Church is opposed to the production of vaccines using tissue derived from aborted foetuses,” it also states that “the Church teaches that the paramount importance of the health of a child and other vulnerable persons could permit parents to use a vaccine which was in the past developed using these diploid cell lines.”

The bishops then briefly mention the 2005 Pontifical Academy for Life document “Moral reflections on vaccines prepared from cells derived from aborted human foetuses” before quoting a separate 2017 Pontifical Academy for Life statement, which asserts that “all clinically recommended vaccinations can be used with a clear conscience and that the use of such vaccines does not signify some sort of cooperation with voluntary abortion.”

U.K. Catholic Deacon Nick Donnelly told Church Militant that “one of the cell lines being exploited in the production of the COVID-19 vaccine at Oxford University is from a healthy baby girl murdered through abortion in 1972 in the Netherlands.”

“Her kidney cells were harvested for medical research and given the dehumanizing label HEK-293. She’d probably be a 40-year-old mother with her own family by now,” Donnelly said.

“I don’t know how CBCEW can say it’s okay for Catholics to use vaccines incorporating cell lines from babies murdered through abortion,” he continued.

“Instead, the bishops are saying not only is it morally permissible to benefit from her murder through abortion, but that its a moral obligation for the greater good.”

In an open letter published in May, Catholic clergy and laity led by former papal nuncio Archbishop Viganò and Cardinals Gerhard Ludwig Müller, Joseph Zen, and Janis Pujats said that “for Catholics it is morally unacceptable to develop or use vaccines derived from material from aborted fetuses.”

“I renew my call that we reject any vaccine that is developed using aborted children,” Strickland tweeted.

Thank you for joining me for this episode of The John-Henry Westen Show. If you’ve enjoyed this program and are concerned about the issues we covered in it, there are three things I’d like you to do.

First, sign the two related petitions. One supports pastors fighting oppressive state mandates such as Communion in the hand, and the second is our petition with nearly a million signatures already opposing mandatory vaccination for the coronavirus.